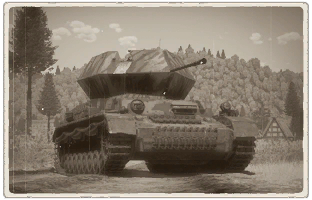 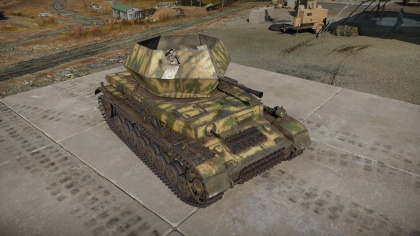 The Ostwind is lightly armoured, as most anti-air vehicles are, but is also unexpectedly survivable. With 5 crew members and a fairly spacious crew compartment, it is not uncommon for the vehicle to survive a direct hit from a shell, even one containing explosive filler. A center-mass shot to the hull will often only hit the ammunition storage, and there is a good chance that the ammo will not detonate in these situations.

However, this does not mean that the Ostwind is incredibly well-protected by any stretch of the imagination. It is still only a lightly armoured SPAA, and enemy tanks will have absolutely no trouble destroying it. Usually, a well-placed shot can at least cripple the Ostwind's ability to move or fire. Also note that the Ostwind's turret is completely exposed, making the three crew members within very vulnerable to strafing attacks by enemy aircraft. 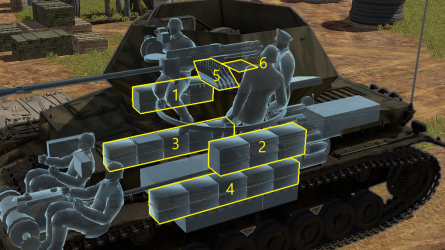 Ammo racks of the Ostwind

The Ostwind is best played in an anti-aircraft role. When this play-style is used, it is recommended (as it is recommended for any anti-air vehicle) to fire only when there is a good chance of hitting enemy aircraft. Firing at long ranges with the hopes of getting a lucky hit is both a waste of ammunition and a good way to broadcast your position to enemy ground and air units. Also, try to stay near cover--next to buildings or under trees and shrubbery--since the Ostwind's open turret makes its crew quite vulnerable to strafing attacks.

In a pinch, the Ostwind can be used to attack light and medium ground targets. This is often not the Ostwind's most effective use, but it is possible to destroy such enemy vehicles using the PzGr round, especially when firing at their sides or rear. Still, keep in mind that the Ostwind is itself lightly armoured, and quite easy to disable or destroy. If this vehicle is to be used in an anti-ground role, then it is best to avoid being detected by the enemy whenever possible. Also note that against heavier tanks such as the KV-1, the PzGr round will likely not be able to penetrate from any angle.

From 1943 onward Germany began to place more and more emphasis on self-propelled anti-aircraft guns (SPAAGs). This was because the Luftwaffe had lost their aerial supremacy they had maintained early in the war, as the Allied powers were able to completely outpace the German industry in terms of aircraft production. This lead to designs such as the 3.7 cm Flak auf Fahrgestell Panzerkampfwagen IV (sf) "Möbelwagen", which was succeeded by the Flakpanzer IV Wirbelwind - which was based on the Panzer IV chassis.

Designed in 1944, the Flakpanzer IV Ostwind (East Wind) was another Panzer IV based SPAAG, and it was designed to replace the earlier Wirbelwind. An unmodified Panzerkampfwagen IV chassis was used with the turret removed and replaced by a new open-topped hexagonal turret. The turret was open-topped to ventilate the large quantities of smoke generated by the gun, which would otherwise enter the enclosed crew compartment and cause harm to the crew. The armament of the Ostwind was a 3.7 cm Flak 43 anti-aircraft gun. The 37 mm gun was not only effective against aircraft, but also against lightly armored vehicles and light fortifications. Compared to the Wirbelwind, the Ostwind had a slightly better protected turret and a more powerful armament. The Flak 43 was simply more powerful than the 2 cm Flak 38 guns of the Wirbelwind.

The Bundeswehr ordered 100 Flakpanzer IV Ostwinds in August 1944, but only 44 vehicles were completed between December 1944 and March 1945. 37 of the vehicles were converted from already existing PzKpfw IV tanks, and 7 were purpose-built. All conversions and constructions were carried out at Ostbau Werke in Sagan, Silesia (now in Poland).

A development of the Wirbelwind project. The goal of the Ostwind project was to increase the unit's firepower, protection, and effective range. For this purpose, a 3.7 cm FlaK 43 anti-air gun was installed on it, and its turret's armor was increased to 25 mm. The first prototype was completed in September, 1944. In the same month, on the 23rd, it was used in combat operations on the Eastern Front. Between 1944 and 1945 Ostbau-Sagan released 43 mounts. They were more effective than their predecessors had been.