The Oerlikon KBA (25 mm) is a multipurpose autocannon with a rate of fire of 550 shots/min making it on par with equivalent cannons. It fires NATO 25mmx137 standard ammunition which grants it high degrees of adaptability to both ground and air targets. Being lightweight, compact and equipped with the Instant Ammunition Selection Device made it a preferred choice for many IFVs, APCs and Naval Anti-Air platforms. 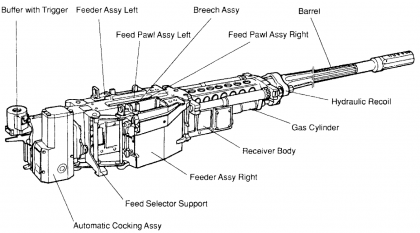 Around 1964-1965, the United States Army started the Bushmaster as an offshoot MICV-65 program to replace the M113 APC. The requirements called for ammunition that could penetrate 25 mm steel armour from 1,000 meters at a 60 degrees angle of impact, ammunition selection for a variety of targets, the ability to switch between accurate single shot or a 550 rounds per minute burst-fire mode for use against aircraft, compact for use in turrets of APCs, and being simple to operate and service.

TRW Inc. entered the competition with a design created by Eugene Stoner, who was famous for designing the M-16, the United States service rifle of the time. TRW presented their own requirements that it used a gas-operated rotating bolt action, a dual-belt feed system for quick ammunition changes, and it has to be fully automatic and actively locked. The prototype, designated the TRW-6425 internally, was developed around a 25x137mm cartridge. Tested throughout the 1960s in multiple NATO countries, the program was delayed due to the Vietnam War. In 1969, TRW abandoned the project and sold the rights to Philco-Ford, who developed design into the PFB-25 which was selected by the Army when they restarted the program. However, the US Army found the cannon had deficiencies so Oerlikon, who bought the rights from Philco-Ford, went on to the further develop the gun into the Oerlikon KBA. In 1971, the refinements were completed to the point the cannon was adopted by the Netherlands in the Oerlikon KBA B02. However the design was not adopted by the United States, and the US Army decided to adopt the M242 Bushmaster instead for what became the Bradley.

In multiple turret configurations, such as the OTO-Melara HITFIST, the KBA is used by armies and navies around the world. Italy is a primary of the KBA, with the Navy using it on ships ranging from Trieste Aircraft Carrier, to the Vulcano-class auxiliary ship. In the Italian Army, the anti-aircraft SIDAM 25 uses this cannon while the KBA B02 is used on the Dardo and Freccia.