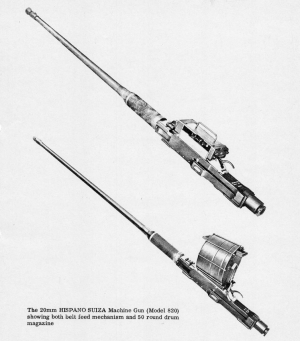 The 20 mm Oerlikon KAD is a 20 x 139 mm gas/blowback autocannon which was mainly used in anti-aircraft roles. The Oerlikon KAD went by two other names, the Hs.820 and M139. 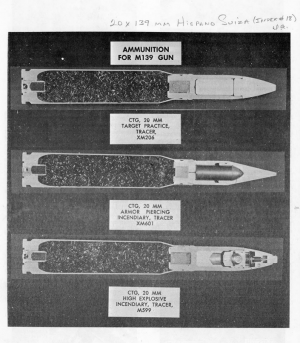 There are two shell types across three belts.

The cannon is effective in both an anti-air and in a ground attack role if used correctly. Its high muzzle velocity means targeting need less lead. Its high rate of fire however is a double-edged sword: the gun should be fired in short bursts, or it will deplete quickly. The recoil is also significant.

The history of the Oerlikon KAD is rather convoluted, existing as the same weapon across three different names, the Oerlikon KAD, HS.820 and M139. Despite its high performance, it was out-competed by other guns, however, it still found use in aircraft, ground and naval roles. Originally made to replace the Hs.404 cannon, and was based on the Swiss 20x139mm FMK round. It's original producers, Hispano-Suiza had its armaments division purchased by Oerlikon in 1970 and was renamed the Oerlikon KAD. The US produced a slightly modified version called the M139. Under the Hs.820 name, it was fitted to a number of various weapon mounts for anti-aircraft purposes. Under the m139 title, it was fitted on the m114A2 and the MICV-65. [1]

The weapon's major selling points were actually ones concerning logistics. The internals of the gun was simplified making it cheaper to produce and easier to maintain. For its size and role, the KAD was relatively light, weighing 57 kg(125lb.). The casing for the ammunition had a special lubricating coating, eliminating the need to grease the gun. Improved metallurgy and design allowed for extended barrel life, with the average barrel being good for 15,000 rounds. It was also one of the first guns to come with "totally harmless" practice ammunition, used for training and special testing.

The original Hs.820 came with a long list of specialized ammunition types, however, only the American munitions are available in-game. It was also able to be fitted with two types of anti-tank grenades, launched from the barrel of the gun. Neither of these are in-game. [2]