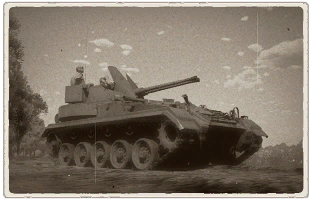 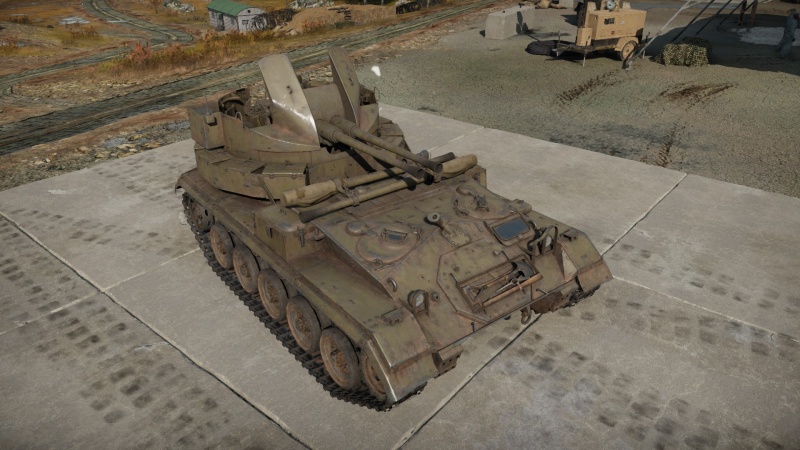 The Twin Gun Motor Carriage M19A1 is a rank III American self-propelled anti-aircraft (SPAA) gun with a battle rating of 5.0 (AB) and 4.3 (RB/SB). It was one of the first vehicles to be released with the US ground forces in Update 1.45 "Steel Generals". Armed with dual-mounted 40 mm Bofors guns, the M19A1 provides a substantial firepower upgrade over the standard .50 cal machine guns and 37 mm autocannon used in its predecessors M16 MGMC and M15A1 CGMC.

As an SPAA, stay behind and close to your teammates and outside of your enemies' view and range while keeping a clear line of sight to the horizon for low-flying aircraft.

The M19A1 is so lightly armoured that it is very vulnerable to nearby ammorack detonations, bomb blasts and even heavy MG fire can reliably penetrate the vehicle from beyond 1,000 m. As the M19A1 has an open-topped turret, gun servants are also very exposed to MG fire, artillery strikes and plane strafings.

As a light vehicle, the M19A1 is agile. While it has a high top speed, the acceleration is quite slow: expect a cruise speed around 40 km/h instead. The reverse speed is very high, allowing you to pull out of dangerous situations quickly. The lack of neutral steering makes turning on the spot slow (3 km/h): make sure to build a little speed before turning and you'll turn faster (7 km/h). If you need to quickly turn your hull on the spot towards flanking enemies, privilege the reverse gear (-6 km/h).

The offroad mobility is good: the M19A1 reaches 17 km/h when fording, 19 km/h when driving uphill with some speed built-up and a mere 12 km/h uphill from a stop start. The wide tracks combined to the light weight of the vehicle grant the M19A1 a good mobility on hard (solid ground, roads) and soft terrain (mud, snow, sand). Light obstacles (fences and bushes) are not a problem but medium to large obstacles (posts, trees, concrete blocks and parked vehicles) will reduce your mobility: avoid them.

The 40 mm gun stays reliably accurate until 1,000 m distance. Beyond 1,500 m the loss of accuracy becomes a real handicap. The shortness of the gun is mitigated by the high rate of fire and the fact that targeted aircraft are bigger than an average ground vehicle. Your ideal engagement window is between 1,000 and 1,500 m for aircraft. The high muzzle velocity of your shells grants you pretty flat firing trajectories and thus helps fire at fast-moving targets from a distance. As your shells weigh the same, your different belts offer the same firing arc.

The turret traverse speed is very high, allowing you to track any aircraft flying right by you. The gun elevation is also very good, almost allowing vertical fire. The depression angle is poor but not often used. The recoil is minimal and barely impacts your targeting. The reload time between clips is very short: under 1 second. While lacking a stabilizer, the M19 still can reliably fire on the move at targets under 700 m distance.

The gun overheats after in 20 seconds of uninterrupted fire and is forced into a cooldown phase of 10 seconds during which you can't shoot. To keep the gun from overheating, privilege firing by bursts instead of continuous fire with small pauses between shots. The overheating is displayed in-game by 4 red quadrants around your sight gradually filling up as you gun temperature rises. Always keep it from reaching the 3rd quadrant. 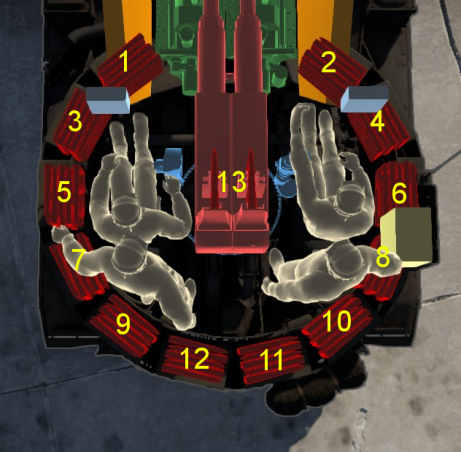 Compared to certain other SPAAs (ZSU-37, Wirbelwind, M13 MGMC, etc.), the M19 cannot be used as effectively in an anti-vehicle role, so stay behind your allies and watch the skies for enemy aircraft. If contact with ground targets is inevitable however, aiming for a targets' cannon barrel or tracks is a valid option. If flanking is available, take the opportunity and load some shells into their sides or rear. However be very careful, your crew members are exposed to machine gun fire and can easily be knocked out. This is a problem especially if it's coming from enemy aircraft, as they can also easily kill your crew. So take caution if using the M19 in an anti-vehicle role.

Combat experience in 1941-1942 showed that the troops needed a mobile anti-aircraft system capable of escorting mechanized columns and protecting against enemy aircraft. Development of the new vehicle began in 1942. The first prototype of the T65 self-propelled artillery piece was created using the M5A1 light tank chassis, though it was replaced during trials with the M24 light tank's more modern version.

By September 1945 Cadillac and Masse-Harris had produced 285 (300 by other calculations) units, and by the end of 1945 they had begun to join tank divisions. They saw combat in the Korean War from 1950 to 1953. The primary goal of the M19 was to fight off land targets, something they were good at through the entire campaign, and they remained in the US army until 1956.