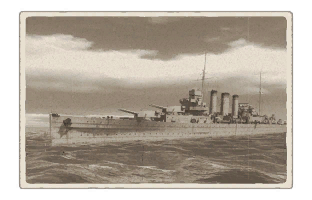 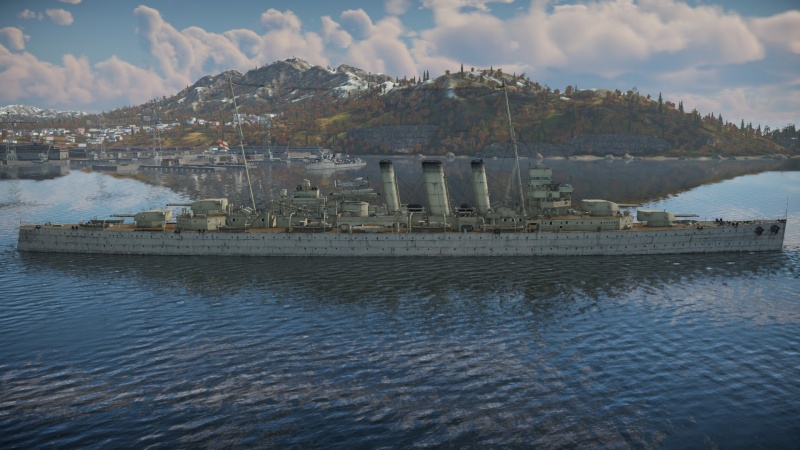 Located amidships is a catapult with one Osprey Mk IV scout plane which provides unique offensive and defensive abilities, expanding tactical options. Ship-launched scout planes fly just like regular tree units but lack munition choices and cockpit views. The Osprey may look familiar as it is a derivative of the Nimrod fighter, but as a 2 seater equipped with a defensive machine gun along with the fixed machine gun and no bombs. It does have the scout plane ability to cap zones and lay down smoke cover (up to 3 times). Captains will be wise to remember to utilise the aircraft and consider when best to use it, for example to cap a point early or late in the match, to create a smoke screen to stymie enemy bombardment and repair, to attack enemy units directly, or perhaps something completely new!

HMS Kent provides incredible protection: it features torpedo protection of 250 kg, which translates into taking multiple torpedo strikes, without sinking. However, this heavy cruiser can still be sunk by a single well placed torpedo. If it was to hit the front of starboard (left) or port (right) sides which is the closes to the ammunition storage for turret A (first turret on the ship). HMS Kent has the 8" cannons installed, which are the same cannons on the previous ship HMS York. The Kent, has four turrets with two 8" cannons per turret providing it a total of eight, 8" cannons with 1,200 rounds of ammunition. The ammunition choices for main 8" armament is limited to fire only HE or SAPCBC rounds or a combination of both.

To get the best performance out of HMS Kent, it's important to keep enemy ships at range - the eight 8" cannons will be able to knock out any enemy ship fast with well placed shots. To do this, aim for the enemy ship turrets and knock them out so it cannot fire back. Additionally, the SAPCBC rounds will penetrate the deck of the ship and detonate the ammo racks knocking that turret out completely. To do this use the SAPCBC which provide up to 263 mm of penetration and at long range up to 15,000 m up to 143 mm of penetration. This is able to penetrate any ship deck and cause catastrophic damage to the enemy ship.

The biggest naval threats to this ship are the following ships:

Another way of knocking Admiral Hipper & Prinz Eugen Heavy cruisers out is by aiming for the bridge and castle deck and setting it on fire with every salvo. Over time this will knock the crew out slowly and cause the ship to run out, causing critical damage to the ship making repairs longer and longer. Allowing for more hits to happen and possibly a torpedo strike from HMS Kent to finally sink the Admiral Hipper & Prinz Eugen heavy cruisers.

HMS Kent is able to handle aircraft threats very well, its defensive armament when loaded with HE-TF is able to destroy the enemy torpedo and bomber aircraft with ease. However, it's important that you stay aware of them in battle. If they drop any torpedoes they must be dodged, only one torpedo needs to miss the torpedo protection and it's game over. 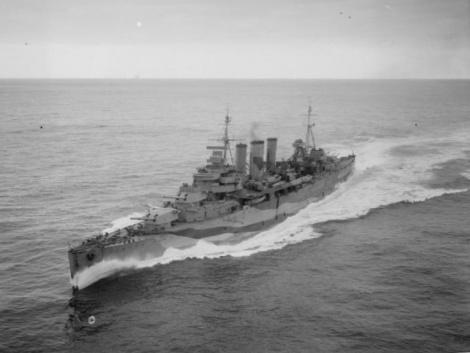 HMS Kent was a County-class heavy cruiser of the Royal Navy. Built in the 1920s, the ship enjoyed a long service life stretching into the final stages of World War II. After her commissioning, she served in the China Station until the start of the Second World War. Following the outbreak of war, she participated in the hunt for Admiral Graf Spee, escorted convoys in the Indian ocean and saw service in Norway. Following the end of war, she was decommissioned, and was eventually scrapped after being used as a target ship.

HMS Kent was the lead ship of the Kent subclass of the County-class cruisers. As the first 'treaty' cruisers designed following the Washington Naval Treaty, they were built within the 10-thousand ton standard-displacement limit. She carried substantial armament of eight 8-inch (203 mm) guns in four double mounts, as well as two quadruple torpedo launchers and numerous AA defences. However, she was very lightly protected due to the imposed weight limitations. She could make a top speed of 31.5 knots (58 km/h).

Kent was laid down on November 15th 1924, and was launched in March of 1926. Following her completion, she was formally commissioned in June of 1928.

Following her completion, Kent was assigned to the 5th Cruiser squadron of the China Station. She spent the majority of her pre-war years serving with the China Station, though she returned to the UK in 1937 to receive additional armour plating.[1] Following the outbreak of war, she joined the French cruiser Suffren and two Australian destroyers on the hunt for Graf Spee. She was then reassigned to troop convoy escort duties in the Indian ocean for the first part of 1940.[2]

After Italy declared war, she was reassigned once again to the British Mediterranean squadron. In September of that year, she was torpedoed by Italian SM.79 bombers, and subsequently underwent a lengthy refit receiving numerous additional anti-aircraft guns.[1] She went on to serve as a convoy escort between 1942 and 1943, and provided cover for British aircraft carriers attacking the Tirpitz in Operation Mascot.[2]

In early 1945, it was apparent that the ship's deteriorating condition and lack of crew was impeding its ability to operate. As a result, the ship was paid off in early 1945. She remained in reserve until early 1948, when she was used as a target ship.[1] Thereafter, she was given to BISCO for scrapping.[2]