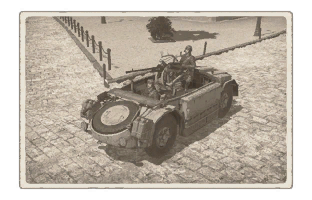 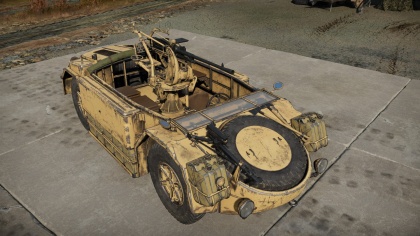 The AS 42 lacks in armour and is very vulnerable to attacks from the air. While the sloped 3 mm of armour may be sufficient against standard machine guns, most heavy machine guns are able to shred this vehicle and as such it is not recommended to engage in slugging matches.

The AS 42 has 2 crew with ammo located in the flanks of the car. In rare cases, the gun's armour can protect the gunner. 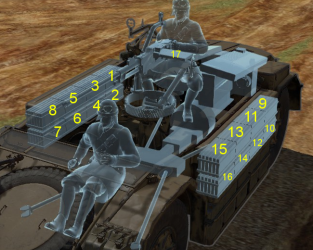 The main role of the AS 42 is as an anti-air asset. Position the vehicle in an open space to be able to detect aircraft from a distance, usually near your spawn point. You can move forward and stay close to your teammates to offer the best AA support but you'll then become target to enemy tanks (especially with artillery strikes and MG fire). Engage approaching aircraft only under 1,000 m to increase your chances of hitting (ideal distance is 500-700 m) and avoid being detected too early. Your fire rate is poor for an AA gun so you have to shoot precisely and make every shot count. Your vehicle's protection is non-existent: plan to have an obstacle nearby you can use as cover (building, rock formation, etc).

You can also play as a scout car on some maps: use your speed to flank enemy forces and ambush them. Retreat and relocate after destroying an enemy. Avoid frontal engagements at all cost as your vehicle and your crew are fully unprotected. Keep in mind that you have good mobility on hard terrain (solid ground, roads, etc.) but not on soft terrain (mud, sand, snow) because of your tires. The big turn radius of the AS 42 also prevents it from sneaking through narrow passages in urban maps. Drive precisely: any obstacle will immobilize you very quickly if you don't pay attention and your mobility is key to your survival in this role.

Pretty much any enemy can destroy the AS 42 in seconds. The most lethal enemies are:

Being a vehicle without any armour, it remains a vehicle easy to destroy: the 2 quickest ways to deal with the AS 42 are MG/autocannons and HEAT/HE projectiles. But any shell with explosive filler will do. Avoid close quarters and engage from long distance to increase your armour advantage while decreasing the AS 42's firepower. You can also force your opponent to play on a terrain hindering its mobility (mud, snow, sand) to negate its main advantage. Aim for the driver or the engine to immobilize it, meaning almost certain death for a barely protected vehicle.

AS 42 Review: Great with the CR42 as backup! Not so much at taking hits... - Joseph 2000
Camionetta SPA-Viberti AS42 Light Italian Truck - The Italian Desert Raider - Tanks Encyclopedia