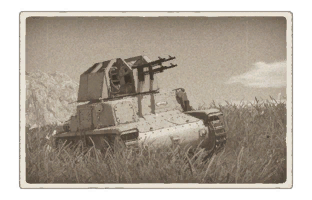 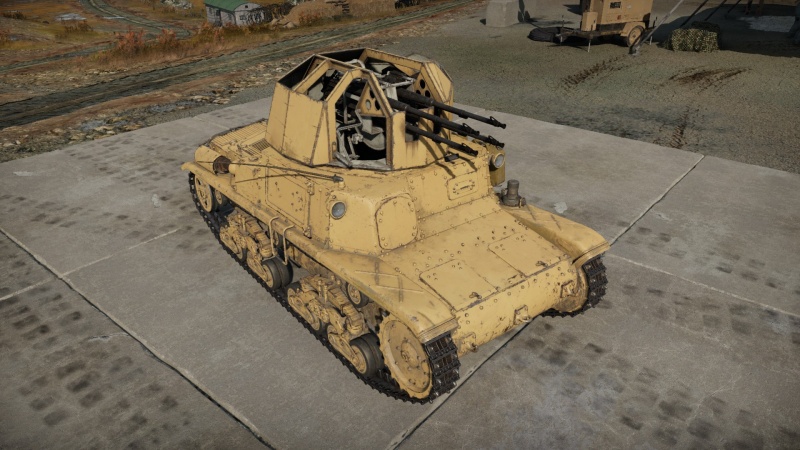 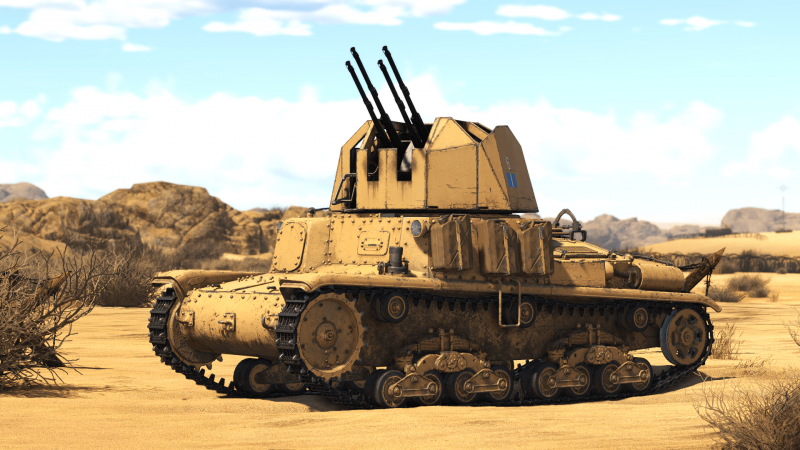 The Semovente M42 Contraereo (shortened as just M42 Contraereo, also nicknamed "Quadruplo") is a rank II Italian self-propelled anti-aircraft gun with a battle rating of 3.3 (AB/RB/SB). It was introduced in Update 1.85 "Supersonic".

The M42 (Italy) is based off the M15/42 hull, with an opened top turret surrounding the crew members. The gunner does have an exposed spot in the front, and if shown to the enemy, can be machine-gunned easily without them to have to fire their main cannon. The turret may protect you from small rifle-calibre bullets, but .50 calibre and up, especially on the M4 Sherman will be able to penetrate your turret from anywhere, as it is generally weak against them. The hull armour is decent, still keeping the armour from the M15/42 hull, but don't expect to tank a lot of shots, as most of your enemies will have better calibre weapons, mostly encountering 75 mm and Russian 76.2 mm cannons. You may be able to bounce some smaller calibre shells like the 37 mm cannons but don't rely on your hull armour as your turret will most likely be targeted by the enemy. You have a small crew count of 3 members, and with two in the turret, and having okay armour, you'll usually die in one hit. 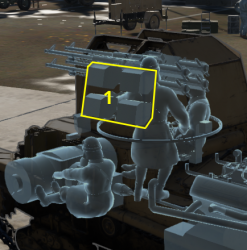 In Realistic battles, the Quadruplo is best used in the support role when tank hunting, sticking with teammates, assisting them and potentially distracting the enemy. Your best bet of killing any tank, usually a Sherman, Cromwell or T-34, is from the side as the HVAP will pierce through their side armour, killing the tank. Light tanks such as M24s, Stuarts and Crusaders are able to be penetrated from the front, but usually this is only in close range engagements. T-50 and other slightly armoured light tanks will be tougher to kill, but you're still able to flank them. You can kill basically any SPAA you see, as you'll usually encounter trucks or armoured cars. Ambush and surprise tactics are good options to kill tanks effectively, as the enemy will stroll past you, usually showing their side armour. Aggressive playstyles are suggested to get the most out of the Quadruplo, similar to playing a Wirbelwind when tank hunting. Try not to expose yourself too much and move from cover to cover, as one hit from a tank shell, usually APHE, will knock you out in one shot, or the machine guns pierce your turret armour and kill both your gunner and commander. When it comes to shooting down planes in the Quadruplo, it is best to get their attention so they try to strafe you, or surprise them as they come closer to you, when you have a good shot as they won't have enough reaction time to evade your shots if they connect. Be mindful that you are open-topped, and you're less likely to survive a strafe run. It should also be noted that shooting continuously will sway the hull back and forth, which will make your aim go up and down.

The history of the M42 Contraereo began during the late stages of the Second World War. In the years following 1942, the Royal Italian army would set out a request for a mobile platform which could mount a special anti-air mount to bolster and provide protection to Italian mechanised columns. At the time they would be subject to very frequent air raids by the British RAF. Although they had some anti-air coverage, it was not enough for their needs. Ground units only really widely access to single 20 mm mounts, usually installed on armoured trucks.

To save time and to reduce maintenance costs, the Italian army opted to go with the M15/42 tank to be used as the basis for the SPAA platform. The original turret would be removed and completely replaced with a new polygonal welded open turret, containing quadruple 20 mm Scotti Isotta Fraschini anti-air cannons. The turret could accommodate belt-fed munitions or clip-fed munitions. At the time this was actually one of the better anti-air vehicles made, not many countries had something remotely comparable, but it would not be long until the Germans had gained a particular interest in the vehicle which would play later on. The first prototype of the M42 Contraereo would be completed by January or February 1943, it would then also be presented for trials at the "Centro Studi Motorizzazione dell'esercito" (in English: "Center for motorization of the army").

In terms of mobility, the M42 kept pretty much all the previous stats of the M15/42 tank, meaning it could reach speeds of up to 40 km/h. When it came to survivability, it also kept the same protection values as the previous M15/42 tank it was based of, however it is good to note that the removal of the 2 x Breda 38 machine guns that previously would be installed in the hull, would instead be covered by a 42 mm armour plate. The new anti-air turret was for the most part exposed to incoming enemy fire, and did not offer adequate protection levels.

As development of this anti-air platform continued, it's likely that a handful of prototypes were made. What ceased the further development of the vehicle however was the 8th of September Armistice of Cassibile. During the confusion of leadership in Italy, the Germans would use that as an advantage to invade the north of Italy and set up a puppet state lead by Mussolini. Due to this, the Germans took over any production factories, any vehicle development and would integrate it into the German army. In this case, at least one unit of the M42 Contraereo was captured by the German army and was likely thoroughly examined by German engineers.