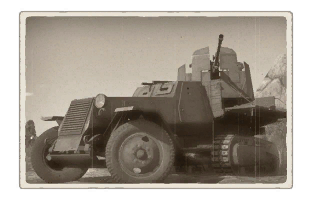 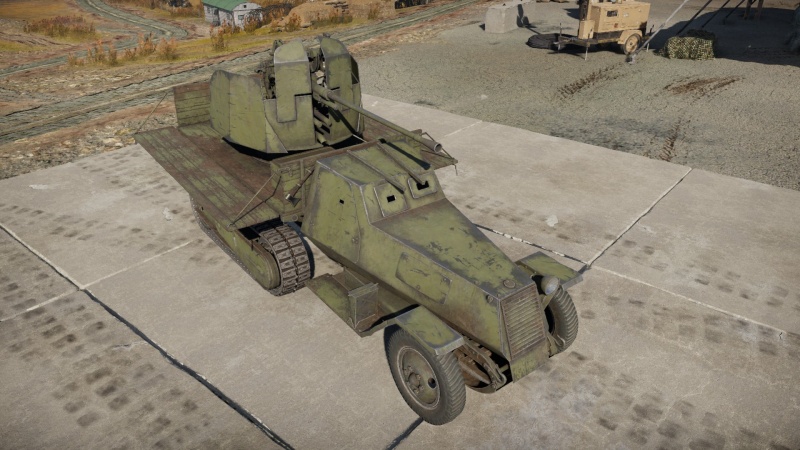 The ZiS-43's armour is nonexistent and can barely withstand 12.7 mm machine gun fire. Thus, much like the rest of SPAA in the game, it is really fragile and the armour should not be relied on. Every plane is a threat that has to be taken seriously as the turret is open and only has a small 15 mm shield which barely provides protection against 7.62 mm machine gun fire. Almost all bomb fragmentation is able to penetrate and damage crew members. Some bombs, depending on the explosive power and fragmentation radius, may not knock out crew members. However they will often damage them and leave them in a yellow-orange status.

Similar to the M16 SPAA, being a halftrack is a mid-point between wheel speed and track traction. It is far from being the fastest halftrack in game. However, it does provide increased traction when it comes to rough terrain, is not comparable to full tracked vehicles but is better than fully wheeled vehicles seen at the battle-rating. Being a halftrack leaves it with a "semi tank turn" capacity, meaning tracks are able to help steer but will not do so completely as the steering is given from the frontal wheels.

The ZiS-43 is armed with a quick firing 37mm which is more than capable to deal with both aircraft and ground targets. Since it has a slow traverse speed, it is tricky to aim with the ZiS-43 when it comes to short distances between aircraft and SPAA. This can be countered by engaging enemy aircraft at distances. However, this is a game changer when it comes to ground fight. Turret rotation speed is the difference between life or death for various reasons: exposed crew, not being able to counterattack quickly, tank traverse is painfully slow. 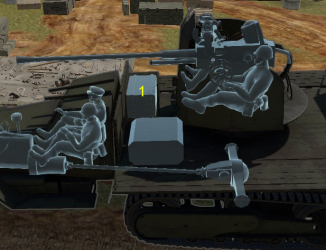 Despite the vehicle potent armament, it is not built for direct front-line combat. It is poorly armoured, tall, slow and unstable. If necessary, it is possible to penetrate most vehicles sides or rear but sticking to anti-aircraft duty will yield the best results. Do not stay in spawn however, most planes will attack your teammates busy fighting instead of you. Similar to previous seen SPAA, they have really good capabilities for both anti-air and anti-ground duties. However, despite being a higher calibre than the previously seen 25 mm and 14.5 mm, it lacks the ROF to engage targets as fast as the other SPAAs.

The GAU (Russian: Главное артиллерийское управление, English: Main Artillery Directorate) set forth a requirement for an anti-aircraft vehicle using a 37 mm AA gun on a ZiS-42 half-track on 14 November 1942. The requirements stated that it was to have armour protection for the engine and cabin, and also was to have an armoured shield for the gun mount. The requirements also gave a maximum weight of 6.5 tons; the vehicle was developed by the ZiS factory in Moscow and was given the designation ZiS-43.

The ZiS-43 utilized the ZiS-42M half-track chassis with a 37 mm 61-K anti-aircraft gun mounted on the flat bed at the rear. The front half of the weapon mount was protected by armoured shields, the engine compartment was uparmoured, and so was the cabin. All the added armour protection gave the vehicle a weight of 8.75 metric tons. In addition to the weapon system and increased armour, the vehicle included other minor changes in comparison to the ZiS-42 including redesigned grills for increased engine cooling. The sides, as well as the top, of the engine compartment received armoured hatches for ease of maintenance. The cabin was redesigned in order to give the driver more comfortable working conditions, as on other models the driver's position was known to be incredibly uncomfortable.

The prototype went to trials on 15 December 1942 after driving 380 kilometers to Gorohovets Artillery Proving Grounds from the factory. From the 19th to the 23rd of December, the ZiS-43 prototype was driven over five hundred kilometers. Problems arose with the cooling of the vehicle, with the engine overheating twice during trials and the cabin getting as hot as 50°C. Due to the weight of the ZiS-43, a maximum speed of 35 kph was achieved on roads and only 19.5 kph on dirt roads. The average speed was 29.3 kph on roads and the fuel consumption was as high as 110 litres per 100 kilometers on dirt roads and still a low minimum of 90 litres per 100 kilometers on more favourable terrain. During firing trials a number of other issues were revealed; the headlights would shatter upon firing due to changes in pressure and the high center of gravity caused accuracy issues due to instability.

The ZiS-43 never entered service thanks to its disappointing performance during trials, leaving production at only one prototype. For an anti-aircraft vehicle such armour was seen as an unnecessary burden, and the program was subsequently cancelled. After the cancellation of the program the armour of the ZiS-43 prototype was removed, returning it to its original state as a ZiS-42M.