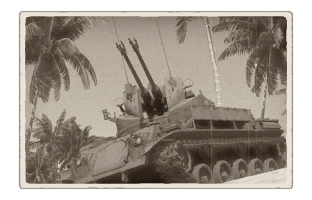 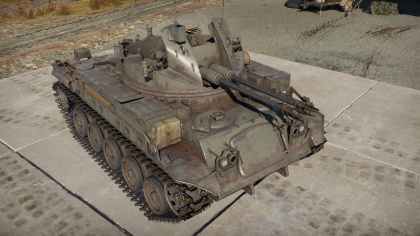 It's fast, it's got two Bofors guns, it's... mediocre at best, awful at worst, it's the American M42 Duster with a JGSDF sticker slapped on it. This tank has literally one feature that makes it any good: it's fast. Like, really fast. That and the Bofors guns actually do a decent amount of damage to aircraft when they hit. Emphasis on "when".

Armour: no. Just no. This tank, being built off the chassis of the M41 Walker Bulldog, has virtually no armour, and can be penetrated by literally anything in the game, except for those few tanks armed with machine guns, of course. In this tank, speed is your armour. A stationary Duster is a dead Duster unless you're firing on an aircraft, in which you should stop behind some cover.

The M42 Duster is armed with two Bofors (40 mm) anti-aircraft guns. They have a decent rate of fire and you will seldom have to stop and wait for a reload - more likely, you'll have to wait for the gun barrel to cool down. Against aircraft, these guns are deadly. A shot or two will be more than enough to shoot down an enemy. They are also quite deadly against lightly armoured vehicles, such as enemy SPAAs or light tanks such as the Spähpanzer Ru 251 or M41 Walker Bulldog, and you can pen the side of Panthers, too. However, they require direct hits. Against the Soviet Heavy or British Medium tanks you are likely to encounter, however - and the Americans - these guns will do nothing for you. You will rarely get an opportunity to use the Bofors on another tank, as they simply lack the penetration to do so - 68mm doesn't get you very far at Rank IV. It's part of what makes the Rank IV Japanese experience so painful. If you can get the guns to hit, you should have no trouble knocking aircraft out of the sky.

This tank has no armour but a lot of speed and guns that do nothing against anything with actual armour. Refrain from attacking enemies that can take a hit from you, unless you like getting "Hit +10SL +5RP". You can roam around the battlefield with your insane speed and act as a scout. Ironically, shooting enemies you know will bounce you have a reason for it because it makes them show up on the minimap for all players to see, although it will also expose you. However, you could stay with your teammates and shoot down planes that will be harassing them - they will see you, with your open-top and exposed crew, and think of you as an easy target. They know the danger of the Bofors guns but for some pilots that is a gamble, they are willing to take. A good way to lure planes toward you is the act like you don't see them - shoot off at some distant (ground) target, at which the plane will notice you are "distracted" and dive to attack you, where you can show them the error of their ways in the form of the 40mm Bofors cannon.