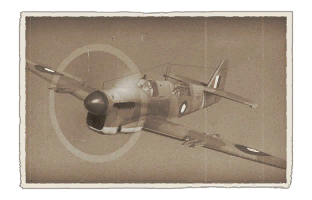 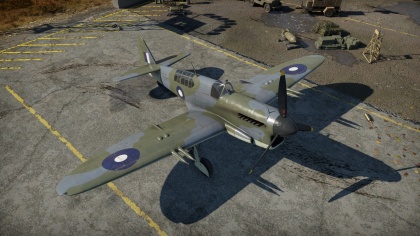 Within War Thunder, the Firefly F Mk I is a Rank III aircraft situated early on in the Fleet Air Arm line. The distinctive feature of the Firefly Mk I is its characteristic chin radiator that supports the powerful Rolls-Royce Griffon engine, later variants of which can also be seen on the late model Spitfires and Seafire. The aircraft is one of the first examples of a 4 cannon fighter aircraft available to pilots and boasts an impressive array of external weaponry to complement this.

Its 4 x 20mm Hispano Mk II cannons carry 160 rounds per gun for a total capacity of 640 rounds. This allows pilots of the Firefly to have more opportunities to attack enemy aircraft or ground targets with its guns. However, trigger discipline should still be practised in order to get the most out of it when it is being operated solely as a fighter. The Firefly can also mount 2 x 250 lb, 2 x 500 lb or 2 x 1,000 lb bombs with one under each wing. The final weapon upgrade, "HRC mk.8", allows for the installation of 8 x 76mm RP-3 rockets, further boosting its ground attack capabilities.

The Firefly often struggles in initial climbing due to the heavy weight and large size of the aircraft. Once engaged, however, the Firefly's "Ace" combat advantage is its exceptional two stage combat flaps. Unlike most aircraft where the flap simply deploys from the wing, the Firefly's flaps actually swing back to enlarge the wing surface as a whole and create much more lift. This allows it to turn exceptionally well at low speeds without external ordnance attached and makes landings very simple to perform even on carriers. Coupled with a wide track and durable undercarriage, the Firefly rounds off to be a very forgiving aircraft to fly.

The Firefly F Mk I is armed with:

The Firefly F Mk I can be outfitted with the following ordnance:

The Firefly originated as a replacement for both the Blackburn Skua and Fairey Fulmar designs. The tried and tested the concept of having two crew, a pilot and an observer, proved to be effective for long-range missions where the aircraft would be airborne for an extended period of time. However, the origins of this crew composition were far less well thought out as some of its other features; the late inter-war period saw the British Admiralty insist on two crew members for any naval aircraft other than those intended for point defence, as it was felt that the complexities of over-sea navigation were too complicated for a pilot to carry out whilst simultaneously controlling the aircraft. This would, however, limit the performance of the aircraft due to the extra weight and size. First taking to the skies in 1941, the Firefly had an impressive 4 x 20 mm cannons; a massive improvement over the Fulmar's 8 x 0.303 inch (7.7 mm) Browning machine guns. The first model was to use a Rolls-Royce Griffon IIB engine that was a significant boost over the Fulmar's Rolls-Royce Merlin.

Early on, the Firefly had a rough start before finally reaching naval squadrons in 1943 and becoming fully operational in 1944. As well as taking part on the Tirpitz attacks - providing cover and support - the aircraft mainly served with the British Pacific Fleet. Proving its worth in this theatre of operation, the Firefly continued in service and was refined in later models to greatly improve the performance. Fireflies of the Royal Navy's Fleet Air Arm would once again see service over the skies of Korea in 1950 alongside Seafires and Sea Furies before finally being retired in 1956 after a lengthy career. The Firefly would also serve with several other navies including the Royal Canadian Navy, Royal Netherlands Navy and Royal Australian Navy to name only a few. The Firefly would ultimately bow out of service well into the age of jets to be replaced with this new breed of naval aircraft and another Fairey designed aircraft, the Gannet.

The Fairey Aviation Company had a long and successful relationship with the British Royal Navy's Fleet Air Arm, perhaps best summed up by test pilot Captain Eric Brown who described their aircraft as supremely versatile, reliable and possessing fine handling qualities, performance and firepower. The Firefly would be no different.

Working under chief designer HE Chaplin, the Fairey team set about answering the call to Naval Spec N.5/40 for a fast, two seat shipborne fighter. The Fairey team had already gained much experience with the successful Fulmar, and had a good basis to work from; however, the Fulmar's Merlin was replaced with the superior Griffon engine and a more advanced, elliptical wing design was adopted, housing an impressive punch of four 20mm Hispano cannon. Further design features included the Youngman area-increasing wing flap. The Firefly was a completely new aircraft rather than an improved Fulmar and was designed from the outset as a true multi-role aircraft with ground strike capabilities. The first prototype was flown successfully in December 1941.

A true pilot's aircraft, the Firefly handled well, was notably robust, capable of speeds of 319 mph at 17,000 feet and was a good deck lander, although the pilot's view on final approach was poorer than its predecessor. It also had a range of nearly 1100 miles and could carry eight 60 lb rockets or two 1000 lb bombs in addition to its impressive firepower.

After a further period of testing and consolidation which led to the adoption of a horn balanced rudder and metal ailerons, an order for 200 Firefly I aircraft was placed and the first examples rolled off the production line in March 1943. After carrier trials in July, 1770 Naval Air Squadron was formed as the first Firefly squadron at RNAS Yeovilton in October 1943. Fireflies acquitted themselves well in their part in the series of strikes against the German battleship Tirpitz and in anti-shipping sorties in the ETO, but it would be in the Far East that the new fighter/strike aircraft would prove its worth. Playing not only an integral role in the ground attack elements of the famous Palembang raids, the Firefly also accounted for three Japanese fighters destroyed in air-to-air combat. Some 800 Firefly I's were built and continued to serve with distinction until the end of the war, but further advances in the design meant that the end of the war was certainly not the end of the Firefly's story.