Difference between revisions of "AH-1S early" 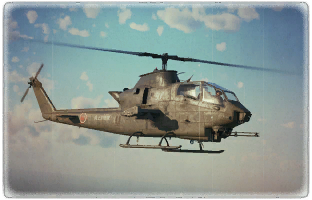 The AH-1S early is a rank VI Japanese attack helicopter with a battle rating of 9.3 (AB/RB/SB). It was introduced in Update "Starfighters".

Unlike the other Japanese AH-1S counterparts, this AH-1S doesn't come with BGM-71 TOW-2.

Additionally it comes with a bicolor brown-white winter camouflage.

The AH-1S early is armed with:

The AH-1S early can be outfitted with the following ordnance:

Playing the AH-1S in ground forces, it is recommended to load up the 8 x BGM-71 TOW missiles + 38 x FFAR Mighty Mouse missiles. The BG-71 will give you the penetration at range in order to terminate tankers and with safety from the anti-aircraft missile equipped anti-air vehicles. It is a wise tactic that anti-aircraft missile equipped anti-air vehicles to be terminated first. Then once terminated, move into the battlefield and dominate the tanks with the 38 x FFAR Mighty Mouse missiles, which can cause a lot of damage and could potentially terminate up to 38 tanks with well-placed shots.