Vertical Take-Off and Landing (VTOL) is a design feature found on some aircraft in the game. VTOL aircraft can hover, take off, and land vertically.

There are only a few controls specifically associated with VTOL aircraft. A description of the controls and how to set them up can be seen below.

The core control for VTOL aircraft is "Thrust Vector", this is an axis control (i.e. has an increase key, a decrease key, and various options associated with it) and controls what angle the thrust vectoring nozzles are pointed/what power setting the lift engines run at. In order to bind this control find it in the controls list and select "Edit Axis", you will then be presented with quite a few options. Assuming you are binding to a key/mouse button (rather than something like a joystick or throttle lever) you will want to bind the "Increase value" and "Decrease value" options to your desired keys. Increase value increases the thrust vector amount (i.e. makes the nozzles point down), while "Decrease values" does the reverse. It is vital that you enable relative control for this option or else it will not work properly, all other settings (sensitivity etc.) are up to personal choice and can be left at default.

The "Hover mode" control puts the aircraft in and out of hover mode; you can bind it to any key you want, however hover mode is of limited use so leaving it unbound is fine. The "Hover height" control is used to increase and decrease your height when in hover mode. Like "Thrust Vector" it is an axis control and is set up in a similar way; bind the increase option to the key you want to make your aircraft go up, and decrease option to the key to make your aircraft go down. All other options are personal preference; you will need to make a decision about whether to use relative control or not. If relative control is disabled then pressing the increase key will make the aircraft go up until the key is released, at which point the aircraft will stabilise at whatever altitude the key was released at. If relative control is enabled then hover mode becomes a scale between -100% and +100%, with a value of 0% meaning the aircraft stays at its current altitude. Pressing the increase/decrease key will increase or decrease the hover percentage (it will stay at whatever value it is at while no keys are pressed). When the hover percentage is greater than 0% the aircraft will go up, when it is less than 0% the aircraft will go down; the larger the percentage number the more rapidly the aircraft will move up or down. 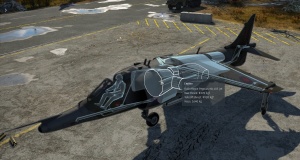 The engine of a Harrier GR.3, notice the protrusions where the nozzles attach.

The Harrier family of aircraft achieve VTOL by using a single engine with a series of thrust vectoring nozzles located around the airframe. In order to achieve VTOL the nozzles are angled downwards, directing all of the engines thrust downwards. A unique feature of this system is the ability to deflect the nozzles to any angle of your choosing, at any speed. With practice this allows you to use the nozzles to redirect thrust and aid you in manoeuvring, however doing this does come with the disadvantage of typically causing rapid speed loss, so be careful when you use it. The Harrier can also angle its nozzles forwards slightly, allowing for rapid deceleration, or even backwards flight. 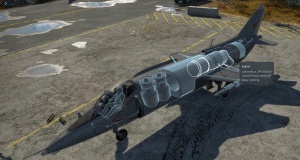 The engines of a Yak-38M, notice the two small lift jets a the front.

The Yak-38 family of aircraft achieve VTOL by having thrust vectoring nozzles at the rear of the aircraft, and additional vertically mounted jet engines (known as lift jets) in the forward fuselage. Flying the Yak-38 works in the same way as the Harrier, however its approach to VTOL brings some disadvantages. The first of which is that when in normal flight the lift jets are shut down and are just useless additional weight. The second disadvantage is that you cannot enter VTOL mode when flying at speeds of above ~500 km/h.

You can take-off in three different ways in VTOL aircraft. The first method is to take-off like any other aircraft; VTOL aircraft typically have very good thrust to weight ratios and accelerate quickly, so this is often a good choice. The next way to to partially vector your nozzles, this diverts some of your thrust downwards, providing a shorter takeoff run. Once airborne and with sufficient airspeed you should move the nozzles to their non-vectored position.

The final way is to take-off vertically. To do this vector your nozzles to an appropriate angle (85-92% on the harrier, 100% on the Yak-38), then increase thrust until the aircraft begins climbing (avoid using WEP if you can as you only have a limited supply of it). Once airborne begin to slowly vector the nozzles and gain airspeed. Once above your aircraft's stall speed you can vector the nozzles all the way to 0% and begin level flight.

When flying at low speed with the nozzles deflected by a suitable amount you have the option of entering "hover mode", by using the "Hover mode" control. In hover mode the game will attempt to maintain the aircraft's current altitude in as close to a hover as possible (depending on nozzle angle staying stationary may not be possible).