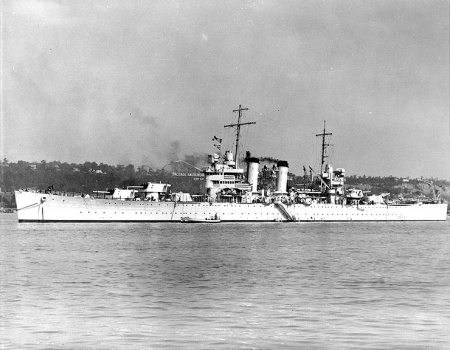 As the London naval treaty limited the amount of heavy cruisers with 8-inch main armament, the American naval designers decided to create a ship displacing 10 thousand tons with a 6-inch main armament. As well, they found that a light cruiser with a 6-inch main armament could overwhelm a comparable heavy cruiser due to their higher fire rate. As a result, the designers pushed forward with a new 6-inch armament light cruiser: the Brooklyn class. However, during Brooklyn's design process, it was discovered that the Japanese intended to arm their new Mogami class with fifteen 6-inch guns. As a result, the Brooklyn’s design was amended to include an additional 3-gun turret mounted in a rear-facing non superfiring position. Brooklyn was built to this design starting from March of 1935, and was completed by September of 1937.

After this conflict, known as the Naval battle of Casablanca, the Brooklyn was once again dispatched to perform convoy escort duties. Between January and July of 1943, she made three convoy runs between the east coast and Casablanca, and later participated in the Sicily landings of late 1943. She provided fire support for the Anzio-Nettuno landings of early 1944, and remained in the Mediterranean theatre until December of that year, when she returned to the United States for an overhaul. However, due to the cessation of hostilities that year, Brooklyn was retired. In 1951, she was given to the Chilean navy, who renamed her O’Higgins. She went on to serve for over 40 years, finally being retired and scrapped in 1992. One of her turrets is preserved at a Chilean navy base; she earned 4 battle stars for her WWII service.