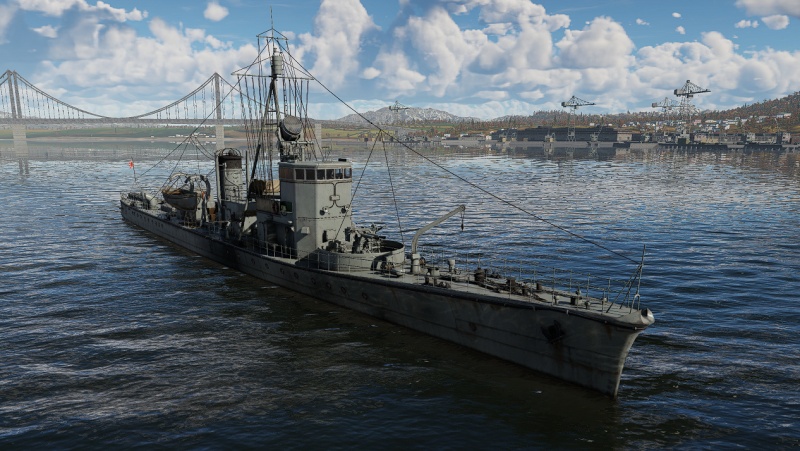 Relatively well-armoured, large ship with high survivability for its rank. Its major weakness is in being prone to fires. Major strength in a high crew count of 65, one of the largest in its battle rating class (after Flower-class). Weapons are relatively well distributed, making them a difficult targets to take down separately. While the ship itself is large in size, its frontal cross-section is relatively small, making it a tricky target in a hands of a more experienced player. Secondary anti-aircraft armament, while powerful, is centred around sides, making ship most prone to the attacks from a rear. Another potential weak-point are ammunition racks exposed over the water line, however those can be minimized by reducing the ammunition count by half. 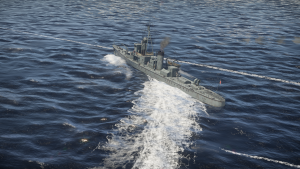 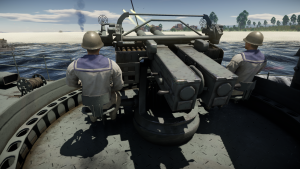 Primary weapon is a relatively low-shell-speed, high-arcing, high rate of fire dual-barrel 40 mm Vickers autocannon. It's an excellent weapon for relatively quickly dispatching targets within 1.5 km range, where its high rate of fire can be used to correct lead and land number of shots before the need to reload. It's extremely useful against small fast vessels, such as hydrofoil torpedo boats. At range however, the flight time becomes a near-impossible for tracking anything smaller than a sub-chaser. There is, however, one advantage to the gun at >1,500 m range: due to its low shell speed gun will fire at a very high arc, allowing K-3 to be one of a very few ships within its rank capable of reaching enemies hidden behind near-vertical obstacles, making it an excellent weapon to use against various opponents trying to hide behind the islands or other terrain obstacles. 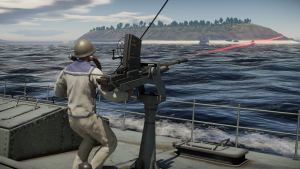 The Type K-3 No.1 possesses some of the best anti-air armament among Japanese rank 1 ships, making it extremely useful in fending-off enemy ships, even armoured gun boats, and relatively useful against air targets. The only disadvantage is in the guns layout, where at most 2 guns can be firing at a target, due to the fact that two guns amid-ship are pointing in the opposite directions, without any overlapping field of fire.

The K-3 is largely a support ship that excels in one-on-one fights in similar or lower battle ratings, while still being useful in higher-BR battles. It's ill-advised to rush capture points in this ship due to its large size that makes for an attractive target to the enemy team. It's a particularly difficult vessel to play until unlocking fire protection system, as it's extremely easy to ignite and fires will quickly take it down - for that reason when fighting against Type K-3 it's highly recommended to use HE shells on every occasion.

The sub-chaser's primary advantage is in a very narrow hull and an outstanding 40 mm gun. The ship is so narrow in fact that it's near-impossible to hit for a motor torpedo boats when facing bow (front) or stern (rear). On the other hand, its length is one of, if not the longest in BR, being a serious issue when faced with torpedoes or high-rank ships, therefore care should the taken to pre-emptively position oneself when engaging opponents.

The ship is best taken equipped with less than a half of a total ammunition capacity, as it's more than sufficient for a vast majority of battles, while significantly lowers the cross-section of the unarmoured ammunition racks that are prone to explosions. Also ignoring depth charges is recommended due to their extremely limited usefulness while adding mass and risk of explosion to the ship.

It's generally good to have at least some HE-DF ammunition onboard, as with a rapid fire of the 40 mm Vickers it can dispatch a field of flak fire very effectively destroying enemy bombers and fighters, or at least scaring them off. Within Rank 1 battles 40 mm HE clips are a better choice than the Universal or SAP, as none of the targets will have enough armour to resist them even at 2,000 m, while additional explosive power increases the speed in which enemies can be destroyed. Primary gun is positioned at the front of the vessel, making it possible to peek from cover and shoot, without exposing much of a vessel. High firing arc makes it possible to shoot from behind cover of a small islands and to attack enemies inaccessible to the ships with higher shell speed.

Both K-3 and K-7 have a relatively undefended rear arc, where at most only one 20 mm anti-aircraft gun can shoot back.

The No.1-class submarine chasers (第一号型駆潜艇, Dai 1 Gō-gata Kusentei) were built under Maru 1 Keikaku programme, totalling 2 ships built in 1933. Vessels suffered from stability and hull strength issues that were resolved in a later redesign that became the No.4. The ship is a flush deck design with a relatively high freeboard for its size and an unproportionally large bridge. Ship's waterline length was 64 m, width 5.6 m for a total displacement of 383 tonnes. Crew consisted of 53 sailors, with up to 65 capacity.

On 27 June 1945 No.2 was struck by a 533 mm torpedo from the Balao-class submarine USS Blueback. No.1 survived the war meeting end of it in a city of Surabaya on a Philippines island of Java. It eventually was scuttled in the Singapore by the Royal Navy.