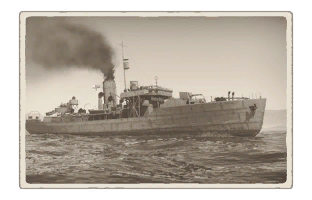 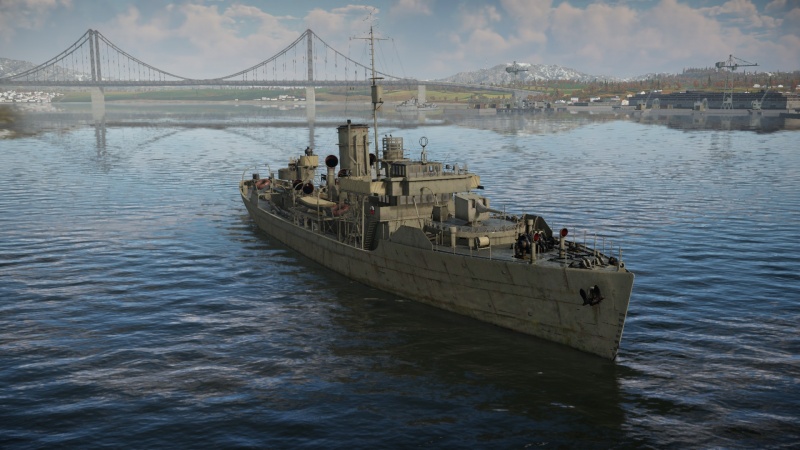 The Flower-class, HMCS Brantford (K-218) is a rank II British sub-chaser with a battle rating of 2.0 (AB/RB/SB). It was introduced in Update 1.83 "Masters of the Sea" as part of the British fleet Closed Beta Test.

While the gunshields may stop low-calibre machineguns, heavy machineguns and cannons will have no trouble with them at any range. The hull and superstructure are cannot stop gunfire of any sort.

There is currently no gun in the game that can hull-break Flower class (K-218).

With a crew complement of 85, Flower class (K-218)'s overall survivability is very high.

The primary armament consists of a single 102 mm BL Mark IX cannon mounted on the bow. There are 150 rounds of ammunition available for it. Stock, the mount can traverse horizontally at a rate of 13°/s and vertically at a rate of 8.5°/s; with the "Primary Armament Targeting" modification installed, this is increased to 15°/s and 10°/s respectively. The gun is single-shot and has a nominal rate of fire of 12 rounds/min. With a stock crew, it can be reloaded in 6.5 seconds; with an aced crew, it can be reloaded in 5 seconds.

The secondary armament consists of a single 40 mm 2pdr QF Mk.VIII cannon mounted aft. There are 3,920 rounds of ammunition available for it. Stock, the mount can traverse horizontally at a rate of 38°/s and vertically at a rate of 30°/s; with the "Auxiliary Armament Targeting" modification installed, this is increased to 45°/s and 35°/s respectively. The gun has a belt capacity of 56 rounds and a rate of fire of 200 rounds/min. With a stock crew, it can be reloaded in 6 seconds; with an aced crew it can be reloaded in 3 seconds.

There are no ammunition options available for this gun on Flower class (K-218). No belt composition is stated in-game.

For the 102 mm BL Mark IX cannon, the best round for general use is the 4 inch HE round because, of the three rounds available, it has the highest explosive mass, making the most versatile round against the majority of opponents. With that in mind, be sure to still carry small amounts each of the 4 inch SAP and 102 mm shrapnel rounds for specialized use.

The 4 inch SAP rounds should be reserved only for armoured boats that the HE round fails to penetrate. To trigger its fuze, the SAP round must penetrate at least 3 mm of armour, which the vast amount of enemies lack. Because of this, if the enemy lacks armour, the SAP round will not detonate, dealing very minimal damage as a result. Always identify the enemy first and only use the SAP round if the other rounds are ineffective.

The 102 mm shrapnel should be used on large targets without armour such as large sub-chasers. Against these, the HE round will almost always fail to destroy the hull compartments in a single hit. In addition, because of their large size, internal components will rarely be damaged by the HE round. In contrast, the shrapnel round is able to consistently destroy, or at least heavily damage depending on the impact angle, the same compartments and produces spalling that travels further inside the hull. As a tradeoff though, the shrapnel round only has about 30% of the explosive mass as the HE round, and it will almost always be stopped by any kind of armour that it hits, making it a poor choice against smaller boats and armoured targets. The shrapnel round also has a timed fuze, though this isn't much more than a gimmick. The 102 mm BL Mark IX cannon's slow traverse and elevation rates, as well as its slow rate of fire, makes it an ineffective weapon against aircraft. Stick to targeting surface targets and leave anti-aircraft defence to the other weaponry.

For the 40 mm 2pdr QF Mk.VIII cannon, the best belt is the 40 mm HE belt because it has the highest ratio of HE rounds to AP rounds, making it the most effective against both aircraft and surface targets. Some 40 mm AP belts should also be taken for use against armoured targets. Alternatively, take only the Universal belt if you dislike micromanaging ammunition or want to avoid the reload between belt switches. This comes at the cost of less damage efficiency though, so it's up to personal preference. If you do not plan on manually controlling the 40 mm 2pdr QF Mk.VIII cannon at all, then take only the 40 mm HE belt to guarantee that the AI gunners always use the most effective belt.

There is no practical reason to use depth charges on any naval vessel in the game. Although they usually result in a one-hit kill if landed properly, their usage is extremely situational, and they are actually a liability in most cases because, if they're not dropped, they act like exposed ammo racks.

The recommended loadout option is "Without load".

As the war started in 1939, the Royal Canadian Navy (RCN) had little preparation for their duty on the sea. Canada needed ships to protect its shore and transportation to the British Isles that would be simple enough to produce in civil shipyards for meeting the large requirement. Initially, the RCN sought to build Halcyon-class sloops, an 850-ton minesweeper of the Royal Navy in the 1930s. However, Halcyon was designed under naval standards; shipbuilding in Canada, at that time, was unable to produce the material and turbine engines to naval standards[1].

Thus, the RCN turned to the 1939 Patrol Vessel of Whaler Type or the Flower class. Based on the civilian whaler Southern Pride, its production did not require sophisticated techniques used on military designs. Consequently, it provided a timely solution for the expansion of RCN. Starting from 1940, Canada launched 121 "Flowers" and modified Flowers in total. The Canadian-built units followed the basic design of Flower, with slight modifications in the position of firearms and boat carriage[2].

HMCS Brantford (K218) was launched in September 1941 and commissioned in May 1942. She was the last Canadian-built Flower following the original drawing. The subsequent ships received an increased sheer and flare to improve their performance in high sea conditions.

When HMCS Brantford joined service, the German U-boat campaign against the convoys was in full swing. Just three days before the commission of the Brantford, two cargo ships were sunk north of Cap Magdalen. HMCS Brantford was immediately used in convoy escorting from Quebec to Sydney until July 1942.

In July, HMCS Brantford became part of the Western Local Escort Force, of which RCN units formed up the majority. This force provided anti-submarine escorts for North American port cities to the Western Ocean Meeting Point near St John's. It handed the duty to the Mid-Ocean Escort Force and guarding the convoy from east. From 1942 to 1944, HMCS Brantford served in two forces interchangeably and protected merchants as well as their precious cargoes from submarine attacks[3].

During her career, Brantford conducted two submarine attacks. The first engagement happened on 5 February 1943 when she accompanied convoy ON-162 about 150 miles east of Sable Island. Shortly after noon, she made a faint ASDIC contact and dropped a pattern of five charges, but scoring no kill[3]. Then, on 7 May 1944, when the frigate HMAS Valleyfield was sunk in the south of Cape Race, Brantford and two sister ships were ordered to support the rescue of the Valleyfield's survivors. At local time 16:24, these corvettes made an ASDIC contact and engaged with depth charges. Brantford dropped 19 depth charges in total. Minutes later, traces of oil came to the surface. However, the contact was never confirmed as submarine.

On 26 September 1944, HMCS Brantford finished her duty as convoy escorting, and she was sailed to HMCS Cornwallis, where she was turned into a training ship for anti-submarine and escort tactics. In late 1945, she was disarmed and designated for disposal. But in 1950, George E. Irving of New Brunswick purchased her and sold her to a Honduran company, where she was refitted as whaler Olympic Arrow[4]. Later sold to the Japanese, she was renamed Otori Maru No.14 in 1956, and Kyo Maru No.21 in 1961[5]. She last appeared in Lloyd's Register for disposal between 1972-1973.

Just prior to WW2, it became apparent that German U-boats would present a serious threat to British transatlantic shipping in the event of an outbreak of hostilities. Realizing this, it became clear to the Royal Navy that they needed a large number of new small vessels that could cope with this threat, whilst being cheap, simple and quick to produce, without hindering the construction of larger warships.

In response to the demand, the Smiths Dock Company proposed a modified version of one of their 700-ton whale catchers. The proposed ship virtually met all Royal Navy requirements and could even be built by smaller shipyards across the country, meaning that a large-scale production wouldn't affect the construction of larger warships. The proposed design was accepted and the first orders for Flower-class corvettes came in as early as July 1939.

Although initially only intended to operate along the British coast line, the large range and robust seaworthiness of the Flower-class corvettes soon saw ships of this class escorting Atlantic convoys to and from Great Britain. Their primary role was to fend off submarines, which is why ships of this class were relatively lightly armed and often specialized in anti-submarine warfare.

Apart from Great Britain, Flower-class corvettes were used extensively in various different roles by numerous other nations during WW2, including the United States, France, Canada, Greece, the Netherlands and many more. Ships of this class served right up until the end of WW2, even when more advanced designs began to replace them.

Whilst Spitfires and Hurricanes kept the Luftwaffe out of British skies, the venerable Flower-class corvettes ensured that vital supplies reached Great Britain, by fighting off the German submarine wolf-packs throughout the war. With over 260 ships built, the Flower-class corvette remains one of Britain's most mass-produced wartime ship type, whose contribution to the war effort is highly obvious.