Wanted to ask, if someone knows, why this tank now hullbreaks from being hit by 105 mm and 86 mm kinetics? I feel like this is somehow tied to volumetric shell update, and it seems old rules of HB no longer exist?

https://wiki.warthunder.com/Damage_mechanics#Hull-break says that kinetics need to at least hit a critical module for instant K/O, but it seems hull itself on Warrior is now a critical module? At the very least, some patch notes said "120mm kinetics and 105+mm chemicals cause hullbreak for that tank", so I'd expect it to only instantly blow up from being hit anywhere if I got hit by 120 mm APFSDS or something along those lines.

For example, before this tank hullbroke if you hit its track even with like 50 mm gun (as long as it's not an autocannon, IE counts as normal tank gun), but it only worked if it was an explosive, like HEAT or HE. Fair enough, tank had ERA shield for that, whatever. It still exists, though, and royal teabag removed that comment anyway. 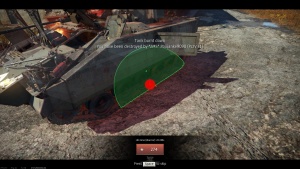 Yesterday it got hullbroken twice by being shot through from side (without hitting any modules directly) by Vickers MBT 105 mm APDS, and from the front by Strv 81 firing unknown shell, which has 86 mm gun, and I swear, apfsds of any caliber can hullbreak light tanks which don't have radiators, or at least 'something' in place of hit (like ZSU), so Rooikat can regularly bust them instantly.

So, basically, I'm either forced to write something utterly heretical again (and risk it being deleted), or I don't understand something/missed some patch note. Should I, and if so, should I apply screenshots? And if I really missed some memo, I feel like hull-break section needs to be rewritten by someone, I guess.

My advice on your writing of your experiences with the Warrior is to try and be more general rather than focused on the specific details. For example, the current line "The Warrior can be hull-broken by any chemical shells of 105 mm calibre and kinetic shells of 120 mm calibre" would be invalidated from your experiences, but keeping it simple as "The Warrior can be hull-broken" would be more flexible for the variety of events, and therefore more accepting in the overall page. In regards to the inconsistent application of hull-break mechanics from published statements, anything not acting in its proper manner should be reported through the proper bug-reporting channels on the War Thunder forums. --Inceptor57 (talk) 07:20, 11 September 2020 (UTC)

So, if the HB text was generalized in a way of like "tank can suffer hits of up to 105 mm kinetic and 120 mm chemical before it is almost guaranteed to hull break", it should cause less problems with people considering it a problem, even if it doesn't follow general statements to a T? I'm not sure if that is going to help, but I'll consider. As for reporting it through forums, well, I tried that twice. It didn't end well, it just was flat out deleted, because I also mentioned, that this problem was relevant for a number of tanks, even though they could just ignore the rest of the text, that they didn't deem relevant. The forum also has a very limited space for evidence deposit, so me reporting every light tank in existence would probably take 3 years. I could also try Russian forum, or to apply simplified (not full) reports, like some people do, but I think they'd be rejected even faster. I don't really have soul, or time, for that, sorry. --bangerland (talk) 10:06, 11 September 2020 (UTC)

The first chart under Additional armament lists the ranges incorrectly (6.5km) but they seem to be pulling the specs from somewhere else that I've no idea how to edit.