The 20 mm M195 is an American rotary cannon seen on the AH-1G attack helicopter. It was created as a shortened version of the M61 Vulcan specifically to be used on the AH-1G to give it a longer ranged gun option for enemy suppression.

Describe the shells that are available for the cannon and their features and purpose. If it concerns autocannons or machine guns, write about different ammo belts and what is inside (which types of shells)

Comparable to the 3-barreled 20 mm cannons on the AH-1F and AH-1Z, the M195 boasts better overheating qualities.

The 20 mm cannon is mounted under the left pylon wing, and can't rotate like the nose-mounted miniguns. The cannon can be used up to 2 km, exceeding the effective range of the 7.62 mm M134 minigun (1.5 km). 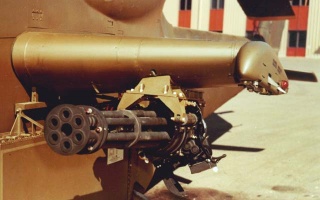 In late 1969, six General Electric M35 armament system was made available to AH-1 Cobra units in Vietnam.[1] The M35 armament system consisted of the 20 mm M195 rotary cannon, which was a modified M61A1 Vulcan rotary cannon with cut down barrels, a declutching feed, and ability to clear itself of live rounds after firing. The Vulcan cannon, which normally could reach rates of fire of 4,000-6,000 rounds per minute (RPM) in fighter jet mounts, was reduced to 750-800 RPM in the M195 to make the recoil manageable on a helicopter. However, the recoil was noted to still heavily vibrate the helicopter when firing.[2] 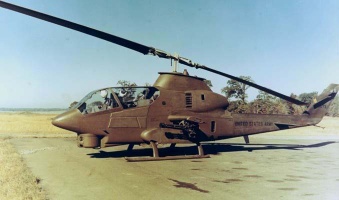 A AH-1G Cobra with a 20 mm M195 installed in the wing. Note the protruding fuselage area at the wing base area containing the ammunition box.

The M35 armament system was mounted on the inboard port wing of the AH-1 Cobra. The system could hold up to 950 rounds of 20 mm ammunition, which was stored in two ammunition box affixed and faired into both sides of the Cobra's fuselage.[3] A modification that needed to be done with the M35 installation was the addition of extra metal plates on the fuselage besides the M195's muzzle as the muzzle blast could damage the helicopter's internal components.[2] Controls were available for either the pilot or gunner to fire the M195,[3] which was aimed by the Cobra's M73 reflex sight.[4]

The weapon system was considered a successful addition to the Cobra's firepower, enabling pilots to engage anti-aircraft positions from a range farther than the installed 7.62 mm Minigun.[1][2] The M195 was type classified as Standard B with the US Army ordering several hundreds. More then 377 units were produced.[3]