Development of an automatic grenade launcher began in the late 1950s by Philco-Ford.[1] A patent was filed in 1961 of the new automatic grenade launcher and the grenade launcher was designated with XM75.[2] By late October 1962, this weapon system was tested at Springfield Armory as a feasible weapon on the nose below the UH-1 helicopter in a turret system designated XM138. The weapon was subsequently adopted in 1963 as the M75 and sent to Vietnam attached to UH-1As in 1964.[1] The turret system would be redesigned by 1964 and then accepted in 1966 as the M5 armament subsystem.[1][2] However, the M75 grenade launcher had drawbacks in its design. A 1964 report on US Army aircraft armament showed that the m75 could leave live rounds in the breech after firing stops, which then could allow for a "run-away" with the launcher firing without any gunner input.[2] The M75 also produced excessive torque when firing due to the barrel position below the cam assembly, which also led to rapid parts wear.[1] 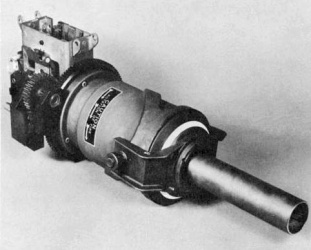 The issues with the M75 caused Philco-Ford to begin developing an improved design in 1963 as the XM129.[2][3] The most notable change was the placement of the barrel from being below the operating drum to concentric with the drum. The issue of the live round being left in the breech was also resolved as well. Tests of the XM129 began in 1965, with results proving well enough that the development of the M75 grenade launcher was halted in 1967 as the XM129, now standardized as the M129, took its place.[2]

The M129 grenade launcher was reportedly used in the UH-1 Huey's M5 armament subsystem in modification packages around 1967-1968, though they were certainly used in the XM94 armaments subsystem that would mount the M129 as a door gun on the UH-1. The M129's most prominent usage was as a weapon in the new AH-1 Cobra attack helicopter. Mounted in the new M28 armament subsystem next to a M134 minigun, The M129 was also mounted on the XM8 and XM51 armament subsystem, which were under consideration for the Light Observation Helicopter program and the AH-56 Cheyenne respectively.[1][3]

Over 1,667 units of the M129 grenade launchers were produced.[4] The weapon was produced by Philco-Ford until 1971, and then production continued under the Maremont Corporation in 1972.[3]