The Landkreuzer P. 1000 "Ratte", also known simply as Ratte, is a rank VIII German super-heavy tank, the first of its class, with a battle rating of 11.0 (AB/RB/SB). This vehicle is ready to be played, in-game right now, that's right you can play it right now - but it's a special vehicle, will you be able to unlock it? Find out how with this special article from the Wiki Share Program. 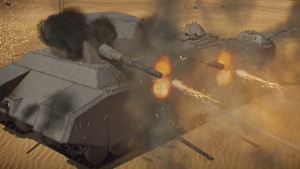 For Ratte, it doesn't matter much how many guns you and your team has.

Ratte features 420 mm sloped frontal armour that's able to negate nearly any hostile weapon fire, including primary weapons from even the heavy cruisers. Additionally, its large interior, with a very dispersed crew, forces those few enemies that are able to pierce the armour with a significant challenge to not only take a number of shots trying to nail exact location of the crew members or components inside, but also to take them down, slowly, one by one, constantly risking their life, when Ratte's main cannon can wipe nearly any other tank even without directly hitting the armour itself.

As a result shooting into Ratte is much like throwing peas at an angry gorilla. 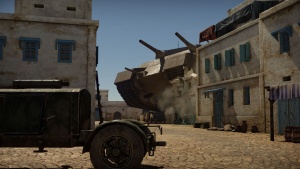 The most scary thing you'll encounter, in your life: Furious Ratte crushing the houses to get to the cap zone!

When you think of a mobile mountain, you might expect a slow, looming behemoth. However in reality its two naval engines can accelerate it up to 45 km/h in Arcade and 41 km/h in Realistic, making for a surprisingly mobile and manoeuvrable opponent that not only can effectively push the cap points, but even jump off the hills or flank enemy teams that mistake it for a passing mountain.

Double 280 mm SK C/34 naval guns used on Scharnhorst-class battleship fire 300 kg armour-piercing shells at 890 m/s, being able to not only penetrate armour of any tank or ship, but literally erase anything smaller than a Destroyer. You're in the Brenus? Thinking your ERA will help you? Whoosh, and you have no turret. You're in the T95? Likely won't even waste ammo, drive over you instead. You're in the BT-5? Single hit will drop framerate for everyone in the match, as the particle effects from the remains of your tank envelop the entire map.

In Arcade mode, where one Ratte can face another, the 280 mm is also the only weapon able to reliably deal with an opponent of the same class. Duels between giants are not something one might want to find himself in, especially with the risk of glitching out of the map when squeezed between the two ramming each other. 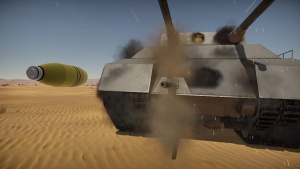 150 mm howitzer is not something you would expect to see on anything other than an ambush tank. But here we are! Its slow shell speed and high arc of fire make it impossible to fire accurately in conjunction with the main guns, but if you need any building erased, or a warship put on fire - it's always nice to have an ace up your sleeve. 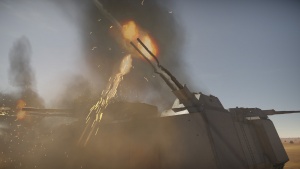 You thought there's just one secondary weapon, didn't you? You thought you can just flank it? Tough luck, mate!
Main article: KwK43 (88 mm)

When you thought that 280 mm house-throwers and a howitzer are not enough. Two dual 88 mm turrets provide rapid response against any attempts of flanking the beast or attacks from the rear. Additionally, thanks to a significant vertical elevation, they're able to protect Ratte even from high altitude heavy bombers, if such would do something as foolish as try to bomb the leviathan from up above. Turrets cover both sides and the entirety of the rear arc; there's only ≈90° in the front arc where they cannot fire against ground targets, though that's covered by the howitzer. They can still, however, engage the airborne targets. 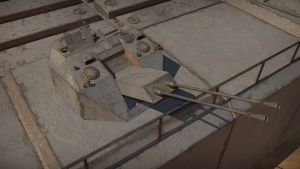 Familiar face of the Coelian

While secondary turrets can cover you against heavy bombers, what about those pesky attackers? A-26B-50 with those four 1000 lb bombs coming to ruin your day? Well fear not! Two dual Flakpanzer V Coelian turrets come to the rescue! Attached to the back of the land cruiser those little fellows will effectively resolve any issues enemies might have with you going for a stroll. Heck: You can even try to take down enemy bombs and rockets with those, mid-flight! Difficult, but not an impossible task for someone who has reached BR 11! 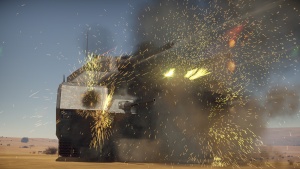 Still have fears from playing the 'lesser' tanks? Use a building to hide your lower glacis and shoot over it!

The P.1000 Ratte is the battleship of tanks and should be considered the same way in terms of playstyle. The P.1000 should defend key points of a map while staying away from dangerous corridors where enemy tanks with high amounts of penetration might hide. Since the P.1000 is quite tanky, it is impossible to destroy the vehicle with a single hit from a tank. However, aircraft are able to destroy this land battleship with ease, just like how the Bismark was critically wounded by a single wave of swordfish torpedo bombers.

This giant should thus always be played like the Maus, but more strategically, with focus only on heading to the cap zones, it will be lucky to make it before the game's timer hits 00:00. If the cap zone is on an island which has to be entered using a bridge or a tunnel, divert and stay outside the entrance of the tunnel or bridge and pick the enemy off one by one when they exit it.

Dealing with enemy air-targets, assign the game A.I. to operate the AA turrets, press X+3 when selecting the target which is considered the biggest threat i.e. bombers & attackers.

It's very important to note that due to the mammoth size of this land battleship, that getting de-tracked by enemy fire is very common, its tracks are only 25mm thick, which means almost any round can penetrate the tracks and cause the tank to come to a sudden stop! 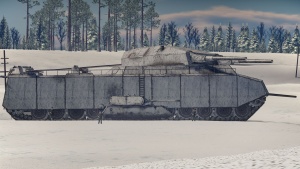 Small, huge, absurdly enormous - your Rattle will be so large, that enemies will flee out of fear alone!

Designed to besiege fortifications, crush enemy battalions by being a portable mobile fortification. It was designed by Krupp, it was to be empowered by eight U-boat engines! That's right, eight MB-501 20-cylinder marine diesel engines to provide a total of 12,000 kW (16,000 Bhp) needed to move this mammoth across the battlefield.

The P.1000 was never built in real life, one of the reasons was that the infrastructure at that time was unable to support this land battleship. For example, it needed to be transported across zones to get to the fight the fastest way, because driving tanks hundreds or thousands of miles, would not be good for it. Instead this would be done using rail, that's right a choo-choo train!

How do you play this? We will tell you, yes this isn't a joke, comrade player!

Follow the instructions on this page and have fun - Remember War Thunder has many user made missions & vehicles, from paper to iconics and more, which can all be enjoyed and with many hours of fun!

If you would like to make your own missions, vehicles and skins please check out the War Thunder CDK. Remember: If your skins and vehicles are selected to be in-game, you can earn money for them!