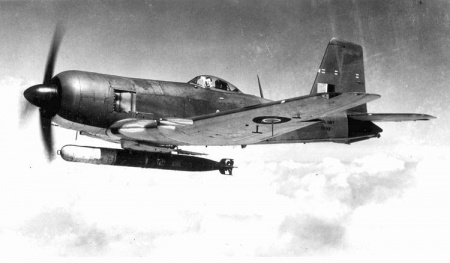 Side view of an Firebrand TF Mk I outfitted as a torpedo bomber.

Designed to a 1939 tender by the Royal Navy's Admiralty, originally the Fairey Firebrand was intended as a carrier-borne escort fighter, with emphasis on its range over speed. This was due to a prevailing school of thought that carrier fighters' primary task was that of escorting strikes on enemy forces, with the aerial defence of the fleet best left to the ships' own anti-aircraft guns. The original tender, N.8/39, specified a carrier-borne fighter with a fixed forward armament of 4 x 20 mm cannons, preferably an aircraft with a two-man crew consisting of a pilot and a navigator for long-distance flights over water. Blackburn started preliminary work on such a design.

When World War II started in September of 1939, the Royal Navy already had two aircraft in service in the fighter role: the Gloster Sea Gladiator and the Blackburn Skua, of which the latter was incapable of intercepting German bombers or reconnaissance aircraft due to its slow top speed of 225 mph.

In 1940, the Admiralty belatedly realised the folly of their original tender and modified the N.8/39 specification into a new set, N.11/40, which retained most of the previous specifications but explicitly called for a single-seat fighter with 400 mph performance and a 4-hour endurance. Both Blackburn and Hawker responded to this tender, Blackburn with their B-37 design which would eventually evolve into the Firebrand and Hawker with their P.1009 proposal of a navalised Hawker Typhoon. 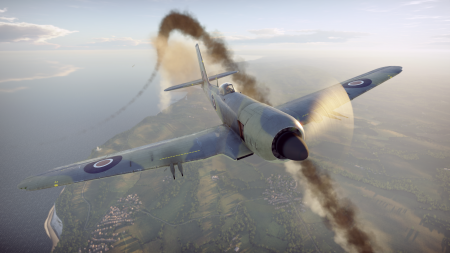 Firebrand TF Mk IV having just taken out an opponent.

Meanwhile, events saw the Royal Navy improvise. As early as May of 1938 concepts were drawn up for a navalised Spitfire, but the need for re-equipping RAF units saw the project frozen in favour of the Fairey Fulmar, which entered service in July of 1940. In the meantime, orders were placed for the Grumman F4F Wildcat which in Royal Navy service became the Grumman Martlet, the first (landbased) examples entering Royal Navy service in August of 1940. With the immediate threat of German invasion receding after the Battle of Britain, both Hawker Hurricanes and Supermarine Spitfires were released for conversion to navalised Hawker Sea Hurricanes and Supermarine Seafires, both types entering service in 1941. When this happened, the N.11/40 specifications became irrelevant, but few in the Admiralty circle seemed to realise this. Thus, work on both the B-37 and P.1009 designs continued.

Following careful consideration, Blackburn's design was chosen over that of Hawker and work on the B-37 began in earnest with the prototype Firebrand making its maiden flight on February 27th 1942. Powered by the Napier Sabre engine, the new aircraft had promising potential, but this was overshadowed by serious problems: despite its specifications asking for a 400 mph performance it barely managed to top 330 mph, and more importantly, due to its size and weight (weighing in at roughly the weight of two Grumman Wildcats) it lacked the agility needed for a fighter. Even worse, problems with the complex Napier Sabre engine due to production and quality control issues at Napier which caused severe troubles and delays in the testing program. Unfortunately, one of the prototype aircraft was destroyed during an emergency landing after the engine ceased.

Following the belated realisation the Firebrand would not make an adequate fighter, the Admiralty decided it would instead become a fast torpedo bomber as a replacement for the antiquated Fairey Swordfish, especially for use against heavily defended targets such as capital battleships. Following a redesign, the first Firebrand torpedo bomber flew on March 31st 1943; by this time the design had been refined, but it still had alarming landing properties, such as abrupt trim changes during missed wire approaches and poor forward sight which made it liable to being rejected for carrier operations. 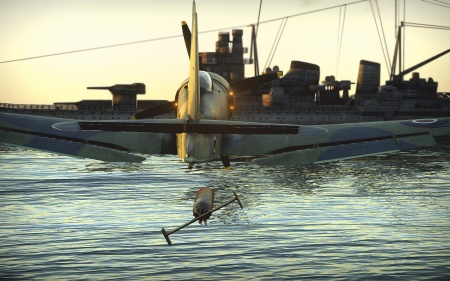 Fish in the water!

Out of the blue, the Air Ministry suddenly blocked the further supply of Napier Sabre engines to the Firebrand program, arguing it was urgently required for the Hawker Typhoon fighter-bomber. But once again, rather than cancelling the Firebrand, the Admiralty simply drew up a new set of specifications: S.8/43 called for a Firebrand powered by a radial Bristol Centaurus engine. As this new variant was being developed, Blackburn began with the production of the first batch of Firebrands, consisting of 9 F.I Sabre-engined fighters and 12 TF.II Sabre-engined torpedo bombers. Some of the latter were used to equip 708 Squadron, a trials unit to test the type's suitability for service

The Centaurus-engined variant, the TF.III, first flew on December 21st 1943, being converted from an airframe originally laid down for Sabre production. Except for the different type of engine, the prototype also differed in having a cut-down rear fuselage and teardrop canopy; wing-mounted airbrakes for rapid deceleration during a torpedo run; RATO hardpoints on the fuselage; and an airspeed indicator mounted outside of the cockpit, allowing the pilot to monitor his airspeed while looking over the nose during a carrier approach. However, the new Centaurus engine proved troublesome in combination with the original Sabre-engined airframe. The aircraft had insufficient aileron and rudder control to cope with the engine's torque, poor forward view, tailhook attachments which were not properly stressed to cope with landing loads, and an alarming tendency to drop a wing when stalling for deck landing. This resulted in a protracted development, eventually resulting in the carrier-capable TF.IV variant which first flew on May 17h 1945 - by which time the war in Europe had ended. By the time 813 Squadron of the Fleet Air Arm was finally re-formed as the first operational Firebrand unit... it was September 1st 1945, and World War II had ended in its entirety.

In the end, 102 Firebrand TF.IV were built, augmented by 68 Firebrand TF.IVs built from the outset to TF.V standard with longer-span aileron tabs and horn-balanced elevators, before production was cancelled in March of 1947. Subsequently, 63 of the TF.IVs were converted to TF.V standard (TF.5 after 1948), of which some were converted to TF.5A standard with power-boosted ailerons for improved handling at deck-landing speed.