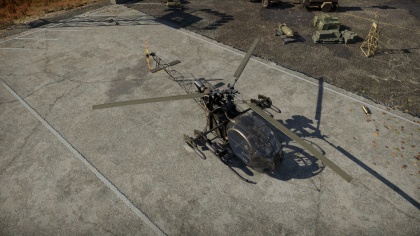 The SA 313B Alouette II (Germany) in the garage

The ▀SA 313B Alouette II is a Rank V German utility helicopter with a battle rating of 8.7 (AB/SB) and 8.3 (RB). This helicopter was introduced in Update 1.83 "Masters of the Sea". A French design, the Alouette II was in West-German service and could carry a multitude of armaments.

The light, multipurpose, single-engined SA.313B Alouette II (French for “Skylark”) helicopter was developed by the French company Sud-Aviation in the 1960s and was widely used both by civilian and military organizations. Many other countries also obtained a license to manufacture these helicopters. In addition to civilian use, this light helicopter has a rich military history. The SA.313B fought wars in Algeria and Rhodesia and took part in several local conflicts. The model’s success is demonstrated by the fact that the SA.313B is still being used for civilian purposes and by the militaries of some countries nowadays.

Since the SA.313B was not routinely equipped with weapons, this issue has been resolved directly in the places and countries where the vehicle has been used to fulfill combat objectives. The helicopter’s armament has been rather exotic at times, such as when rifles and machine guns have been mounted in the apertures of the glass-enclosed front cabin. For the purposes of the game, we have chosen more well-founded projects for arming the SA.313B implemented by French and German crews. Machine gun installations comprised of four 7.62mm MG3 light machine guns placed in pairs on the skids using special fixtures. As an anti-tank weapon the helicopter could carry SNEB unguided rockets, as well as SS.11 guided anti-tank missiles that were located on special transverse tube-shaped beams along the sides of the fuselage.