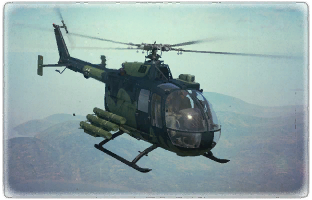 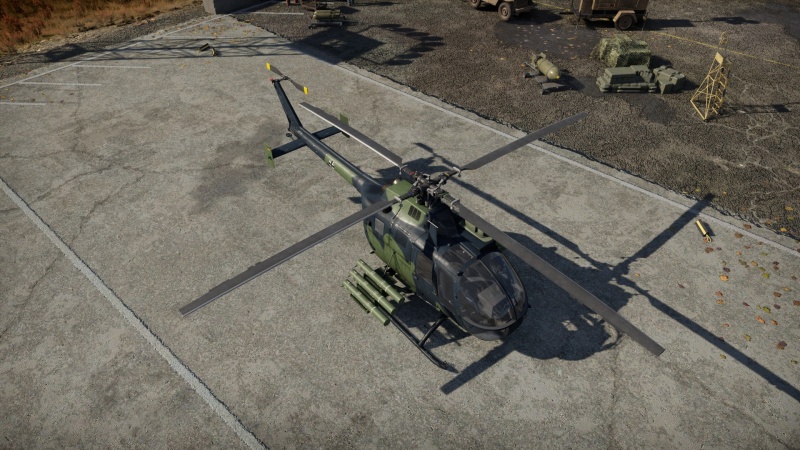 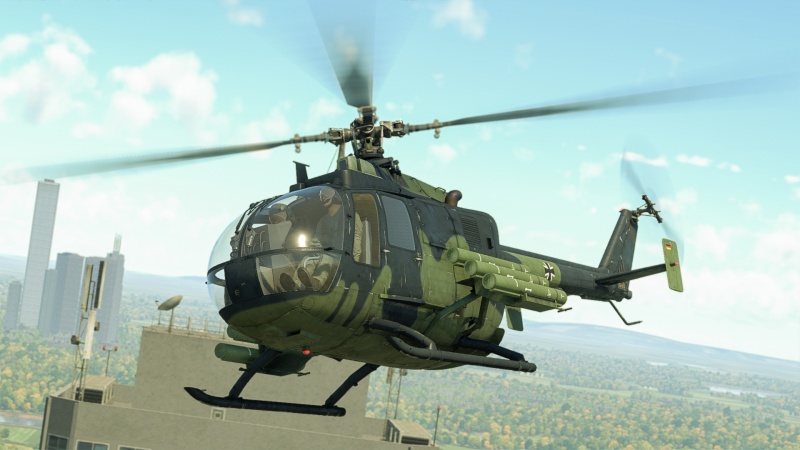 The BO 105 PAH-1A1 is without a doubt a very agile helicopter, being able to perform barrel rolls and other manoeuvres without problems. This excellent agility is still present even while flying at full speed. The light weight of this helicopter also means that it won't bleed as much speed while manoeuvring and allows for a plethora of defensive manoeuvres.

Being a repurposed utility helicopter, there are no armour plates nor armoured glass to protect its two crew members. The pilot and the copilot sit side by side in front of the helicopter, exposed to enemy fire. While they have access to flak vests modification, those won't protect them from the majority of threats they will face. On the bright side, the BO 105 PAH-1A1 has a small size and is very agile, meaning it can utilize any cover very well and also dodge enemy fire with great success. The BO 105 PAH-1A1 is equipped with a radar warning receiver (RWR) from the get-go.

The RWR issues a warning (beep) to the pilot when it detects active radar pulsing towards the helicopter. It also warns pilots when their helicopter gets "radar locked" by continuous tone. It also displays the approximate position of active radar relative to the helicopter and highlights radar that achieved "radar lock". There are also weapon loadouts that allow the BO 105 PAH-1A1 to equip countermeasures launchers, increasing its survivability in contested airspaces.

As the BO 105 PAH-1A1 has access to ATGMs while in stock configuration, Weapon modules are not priority and pilots can choose to go for Flight performance upgrades first. On the other hand, both gunpods modification allows the BO 105 PAH-1A1 to equip countermeasures launchers.

The BO 105 PAH-1A1 can be outfitted with the following ordnance:

The BO 105 PAH-1A1 should be used only as an ATGM carrier. HOT-2 missiles are strong for its BR, but pilots should be aware that composite and reactive armour are becoming more common and they significantly reduce the amount of spalling from chemical munitions.

Pilots can either choose from pure ATGM loadout or ATGMs combined with gunpods and countermeasures launchers. The first option has better offensive potential against ground targets, while the second option increases the helicopter's survivability by adding another layer of defense against AA and gunpod to fend off aerial threats at the cost of a halved ATGM count. Sadly, a single gun pod with .50cal is not much of a threat to aerial targets.

As most ground AA vehicles utilize radar guidance for both missiles and guns, and only two vehicles currently in game utilize IR missiles (PGZ04A and Type 93), pilots should pick the "Chaff only" option most of the time. Chaff breaks radar lock and confuses enemy tracking radar, increasing the probability of a miss.

Under no circumstances should pilots pick pure gunpod loadout, as it practically makes them a dead weight.

Pilots should approach the battlefield flying at low altitude, keeping a distance of 4 km (maximum range of ATGMs). Then they should bleed speed and start hovering. Finding any cover to hover behind and to break line of sight tremendously helps players survival, even trees can become extremely useful. Pilots should pop above the cover for a few seconds, launch a missile or two, then go back and change position. Rinse and repeat.

Pilots should stay around an altitude of 25 m when not engaging enemy tanks. Helicopters at this altitude confuse tracking radar and search radar might not detect them at all. Radar needs an unobstructed line of sight to work properly, so flying low and utilizing ground obstacles helps with helicopters survival. RWR helps with detection of enemy radar AA, but pilots should note that lack of active radar does not necessarily mean that there's no AA active; some skilled players turn off search radars in order to drawn out enemy air assets out of cover. If there's enemy AA, it needs to be taken out first.

Also, the proximity fuze of SAMs is disabled below 25 m. If the pilots are higher and they detect incoming fire or SAM, they should try to duck below 25 m as fast as possible, deploy countermeasures if they have them equipped and they should consider disengaging for the time being. Direct hit can and will obliterate helicopters, but those are harder to pull off when dodging.

Staying in one place not only helps the enemy team to locate helicopters sooner, but some tanks with laser rangefinders might be able to shoot hovering helicopters down with their cannon at a range of several kilometres, since they present almost static targets.

At BO 105 PAH-1A1s BR, the biggest threat comes in the form of SAMs, such as Roland missiles. Those greatly outrange the BO 105 PAH-1A1, thus it is vital to keep situational awareness at all times. Due to their speed, there is just a small time window when pilots can successfully dodge.

Planes and other helicopters also pose a significant threat: if an aerial target is spotted, pilots should consider retreating, either to the closest airfield or in the vicinity of friendly AA. If an enemy helicopter is spotted, pilots may attempt to shoot it down with ATGM if it's close enough, but misses are to be expected.

Pilots should engage aerial targets with gunpods only in self defense and as last resort, since BO 105 PAH-1A1 is poorly equipped for such task.

The development of the BO 105 light utility helicopter started in 1964 by the Messerschmitt-Bölkow-Blohm company. The prototype made its first flight on 16 February 1967. The design was known for its very good manoeuvrability, even allowing use for aerobatic show purposes (with the Red Bull Flying Bulls for instance). It had a good load capacity, a decent speed, and nice, steady, and responsive controls, as well as good flight behaviour.

In 1975, the German Army, interested in the design, commissionned a BO 105 armed with wire controlled HOT ATGMs for anti-tank purposes, thus creating the BO 105 PAH-1. The newer HOT-2 ATGMs were installed in the PAH-1A1 variant. This helicopter however was considerated as a temporary solution, while waiting for a proper anti-tank platform (what would become the EC-665 Tiger UHT)

The BO-105 didn't have proper combat services: it is presumed to have been used by Indonesian forces, in the Papua conflict and the 1999 East Timorese crisis. The helicopter was almost exclusively used in civilian roles such as EMS.