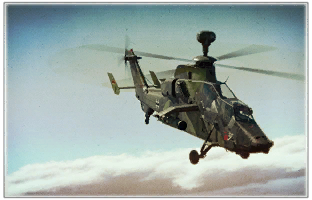 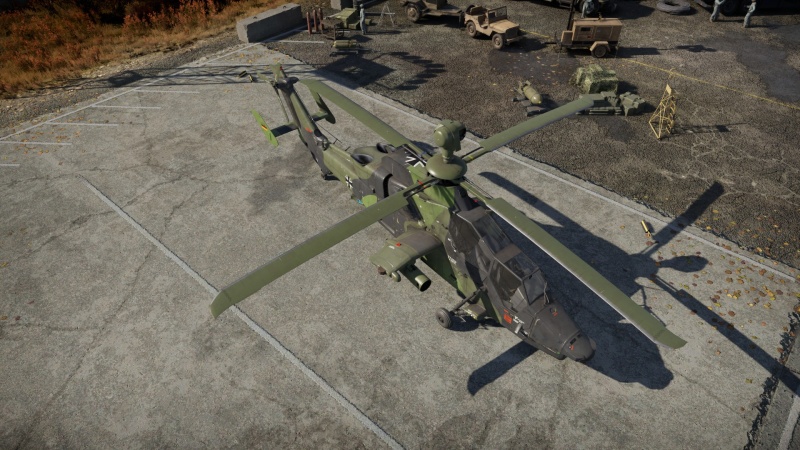 As a Eurocopter, it has the best agility and flight performance compared to other helicopters as the rest of the EC-665 seen in game. It is able to do barrel rolls metres from the ground. Despite not having the best top speed (Russian helicopters excel at that part) it is able to perform "unique" tricks mid-air for helicopters. It is not the best strike helicopter when you want to do lighting strikes (fast attacks with minimal exposure time) but it is able to "peek-a-boo" with enemies, specially since the collective pitch on the EC-665 can be increased and decreased very quickly. One of the pros, at least for flight performance, of the UHT compared to other EC-665s is the lack of the 30 mm autocannon. This reduces the weight of the helicopter, increasing speed, manoeuvrability and agility overall.

As with most helicopters in the game, the Tiger UHT can be shot down easily by even 7.62 mm machine gun fire. However, the EC-665 crew is inside what looks like an "armoured bathtub". The crew is protected by AMAP-AIR (Advanced Modular Armour Plating Air) which is able to protect the crew from fragmentation only. It is not able to withstand machine gun fire without being damaged badly. However, the EC-665's best armour is to not be seen at all. This is something the Tiger excels at. Thanks to the GPS (Gunner Primary Sight) displacement, if the real life combat usage is followed (staying behind trees and mountains and poke just the rotor), the survivability of the EC-665 can be tremendously improved, thanks to this, it is not detected by anti-aircraft at all and will be hard to spot unless thermals are being used.

The EC-665 Tiger UHT can be outfitted with the following ordnance presets:

The EC-665 Tiger UHT is a great tank hunting helicopter, enabled through the help of its superb avionics, electronics, optronics and one-of-a-kind PARS 3 LR anti-tank guided missiles. Although the playstyle is similar to its predecessors, the Tiger UHT is quite unlike other helicopters previously found in its tech tree. With the addition of all-new MAW, thermal optics, air-to-air missiles and unique heat-seeking anti-tank guided missiles, the EC-665 Tiger UHT presents the leading edge of anti-tank helicopters. With support from friendly fighters occupying hostile aircraft and helicopters, the Tiger UHT can singlehandedly wipe out entire teams on the ground, even the latest anti-air vehicles have great difficulty taking out a Tiger UHT when piloted accordingly.

Although possible, the Tiger UHT should avoid actively hunting other helicopters and especially aircraft(unless unavoidable), as it is far more important to prioritize hunting ground targets instead. If required, the Tiger UHT is equipped with 4 Stinger heat-seeking missiles that work best against slow-flying targets within 750m-5km with 2km being the optimal launch distance. With an all aspect locking seeker, the missile can engage aircraft directly coming towards it, however, this is limited to a maximum distance of roughly 4km.

Just like air combat, close-range anti-tank combat is not a very viable option, the 38 Mighty Mouse rockets or 12.7 mm gun pods don't present a great tool to destroy anything that isn't soft targets. If rockets are used, the ballistics computer will assist with landing precise hits.

For the Tiger UHT, there are 2 choices of anti-tank guided missiles: HOT-3 and PARS 3 LR. Although HOT-3 has the highest penetration of any armament in-game, it does not perform well due to its very lacking 4.3 km range. PARS 3 LR however is the highlight of the Tiger UHT, with its unique ability to home-in on the target on its own after launch, allowing the pilot to seek cover immediately after firing the missile. The only disadvantage to the missile is the requirement to lock the target beforehand, which isn't too important due to the short 1-second warm-up timer. This also allows all 8 missiles to be fired within 10 seconds at either the same or 8 different targets at once.

When picking out targets to engage, there are a few criteria to be checked to ensure a good hit. Targets that are moving towards cover such as buildings, terrain, or smoke, or sitting behind bushes (not bushes as 3D decorations). The task of finding targets is greatly improved through the optics being mounted above the main rotor overseeing the entire helicopter and being equipped with thermal/night vision systems. This allows for great viewing angles of over -60° to 60° in the horizontal plane, and -40° to 10° in elevation.

An important feature about PARS 3 LR is the infrared seeker, being able to engage aircraft and especially helicopters too. Although not reliable due to the lack of a proximity fuse, this can be a live saver when fighting at ranges that exceed the range of Stinger.

Altitude is key - Fighting against and around anti-air

In almost all cases, the Tiger UHT will face anti-air vehicles, especially missile-based systems. For these kinds of threats, there are multiple layers of protection against these types of threats. The first one being the radar warning receiver, informing about any radar pings or locks from hostile as well as friendly anti-air. For best results, it is highly advised to differentiate how many pings are picked up, and how many friendly radar-equipped anti-air units are present so that one can prepare for possible attacks. Although a radar lock can be a giveaway if anti-aircraft is active, a missile warning system is installed in addition to the radar warning system. It will inform you if any type of missile has been launched at the Tiger UHT, either ground or air-based missiles. Following the missile warning, multiple ways of evasion and countermeasures can be deployed and used, commonly being flares, quickly lowering altitude, changing the direction of flight, bringing hard cover between the helicopter and launch direction.

The most important part about defending against missile systems is altitude, in cases when the missile is below 25 metres over the ground, which will disable the proximity fuse until it reaches above 25 metres again, greatly limiting its effectiveness against low flying/hovering helicopters. This can be used to reliably evade missiles when no hard cover such as a hill is available.

When deployed properly, the Tiger UHT is a great addition to any line-up. What it lacks against aircraft, it will quickly make up against any ground targets or helicopters.