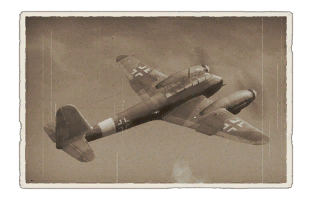 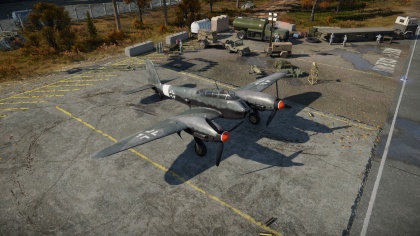 Also tying in with the acceleration is the Me 410's Air brakes, the combination of Air brakes and good acceleration allows you to manipulate your energy more easily than most fighters. The Air breaks allow you to slow down quickly to force an overshoot, avoid exceeding 750 Km/h, give yourself more time to fire at targets or stop an enemy from forcing you to overshoot and then re-gain your speed faster than your foe.

When most players encounter an Me 410 of any variant they wont often think past the aircraft's heavy armament, the A1/U2 is a prime example of this with 4 x 20mm MG 151/20 Cannons and 2 x 7.92mm MG 17 Machine guns in the nose. Although your armament is very effective for hunting bombers in most scenarios, fighter aircraft should be your primary target.

For this reason, always try to get into power fighting when it comes to take on with single-engined enemies. Try to stay in a group. Your defense weaponry will serve you as well as it will your allies.