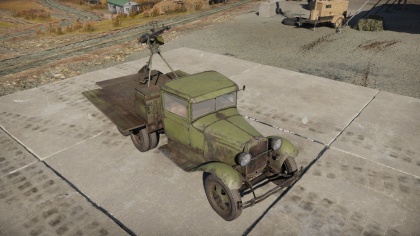 Please see the history of the GAZ- AAA-MM

In the military, the GAZ trucks were used as tractors for gun systems, fuel tankers, radio systems, and even armoured cars. By 1931, an anti-aircraft version was created as well, in order to give the Soviet Union a mobile anti-aircraft system to work with. The design had one DShK heavy machine gun installed on a mount on the truck. This configuration was called the DShK GAZ-AAA and served as a low-altitude air defense system.

Old and reliable 0.50cal proved to be good at harassing low flying planes, infantry and German APC's, but it became apparent that more powerful gun was needed.

DShK proved its worthiness on many occasions, but a new anti-aircraft system had to be devised for the role of a mobile anti-aircraft system. This led to the development of the GAZ-MM (72-K), which while still truck-mounted weaponry, had a noticeable increase in firepower with a 25 mm auto-cannon.