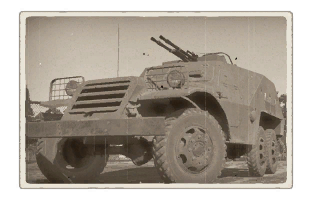 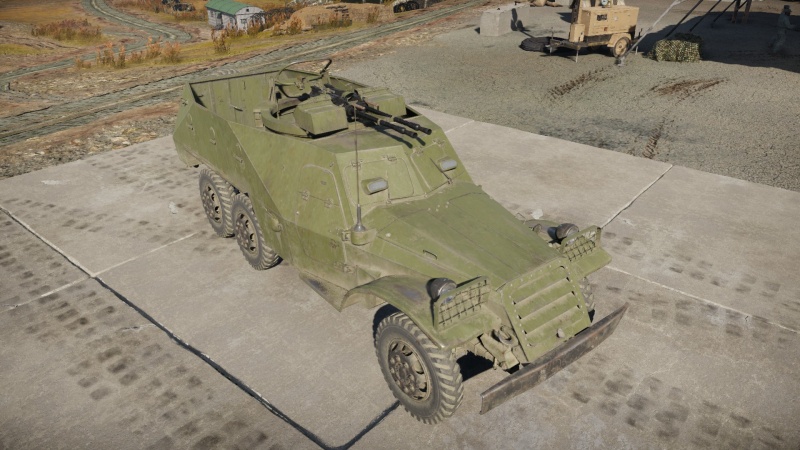 The KB ZIS BTR-152A (shortened to BTR-152A) is a rank II Soviet Self-Propelled Anti-Aircraft gun with a battle rating of 3.0 (AB) and 2.7 (RB/SB). It was introduced in Update 1.71 "New E.R.A.". As with any APC, it features light armour on a spacey vehicle, a good crew count, a decent gun and good mobility. Since there is no infantry to fight, the BTR is used as an AA in-game.

The BTR-152 is an Armoured Personnel Carrier (APC) on a six-wheeled, open-topped truck chassis, meaning unlike the Soviet truck-mounted anti-aircraft vehicles, it can survive low-calibre MG fire from ground vehicles. However, anything above 30 calibre doesn't have much trouble taking this vehicle down. It features a top-mounted twin KPVT gun mount with good traverse and elevation rate. Something to note is the presence of the two spare loaders in the back. Inexperienced players, or those who don't know the structure of the BTR-152A, tend to repeatedly shoot the cab of the truck, leaving these two crew members relatively unharmed.

While armour is nothing impressive for any BR, it is in no way rubbish or useless since it protects the crew from most light ground menaces such as machine-gun fire, most indirect artillery shrapnel, low-calibre HE shells and even some medium-range heavy machine gunfire. These light plates have some chances not detonating incoming APHE rounds, virtually turning them into pure AP shells. To maximize this effect, one should never face tanks upfront. It is recommended to always show side armour if fired at, as from the side, modules are quite spaced out. Avoid autocannons at all costs since any of them can shred this APC in no time from almost any angle. Anyways, in most scenarios, it is better recommended to just hit the gas and avoid any incoming shots/artillery fire.

An interesting feature that can provide any wise commander with a few hits is the BTR-152A's speed. This light APC can carry itself over the road at breakneck speeds, provided it can ride a paved road. In good circumstances, it can reach over 80 km/h and keep its good speed even while turning, due to its wheeled chassis. Offroad mobility is not bad, meaning it can easily follow medium and light tanks on any terrain, making for an effective flanker. Backwards, speed tops at -20 km/h, which is enough to get out of an ugly situation if needed. With its large wheels, this truck can cross some small trenches and rivers, where its GAZ and ZiS truck counterparts would ditch. This truck's centre of mass is quite low, allowing it to turn at high speeds without rolling.

As an AA vehicle, this thing is deadly to CAS that gets close. The MGs have good RPM and a good spread which is important in AA. As long as you lead correctly this vehicle can be used to shield you from 250 lbs - 1,000 lbs from the Allied aircraft or the 500 kg from the Germans. If down-tiered, it should do alright against most tanks as it has quite good penetration, but if up-tiered, you need to get on the sides or rear of most tanks.

Stick to allies and watch the skies. Team play is key with this SPAA since it cannot effectively destroy most ground targets from the front; it will often have to rely on ally firepower. When the battle gets hot, do not hesitate to hit the gas and reach cover while keeping an eye on the sky. Watch out for fighters since they will try to strafe this juicy open-topped target. Loading the API-T belt is recommended, as it can engage both tanks and planes (both of them can appear in sight at any moment).

The BTR (Russian: Бронетранспортер/Bronetransporter or "armoured transport") was a modified design according to the ZiS-151 truck. It features a 6x6 chassis with an additional 5 tons of sloped armour. The mobility and speed were inferior to the original ZiS-151 truck, but it relied on more protection, which was vital than speed. By 1960, the model had been significantly improved in terms of characteristics.

The BTR-152 became the main Soviet armoured personnel carrier (APC) which was then replaced by the 8x8 model BTR-60 later on. The BTR-152A was the SPAAG variant with a double ZPTU-2 or quadruple ZPTU-4 KPVT 14.5 mm heavy machine guns set up.

Despite being 70 years old as of March 2020, BTR-152s still see service worldwide. Most are in use by Syria at around 600 in service, followed by North Korea with 300. The BTR-152A is likely also still in service as well. One of its most notable uses was by the Ethiopian Army during the Ogaden War (1977-1978).