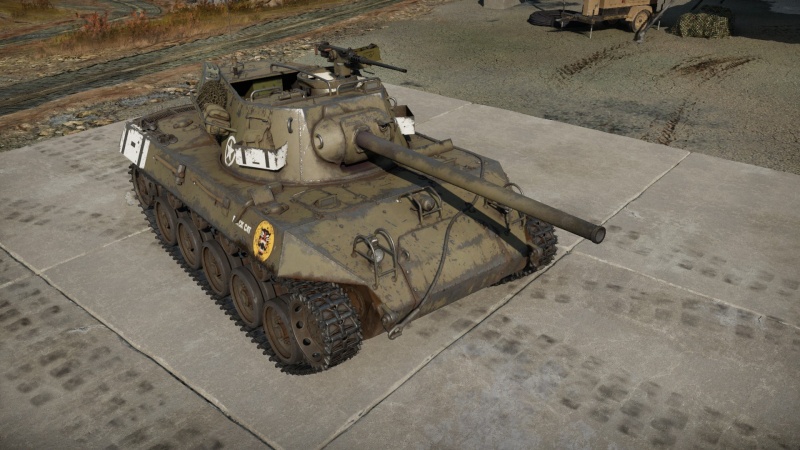 The "Racing" M18 is a gift rank III American tank destroyer with a battle rating of 4.7 (AB/SB) and 5.0 (RB). It is a version of the M18 "Black Cat" customised for racing in the occasional Racing events alongside the Po-2 Night Witch, lacking any form of armament. It has never been obtainable for use outside of the race events.

The M18 is dangerously quick and agile. With its high top speed and acceleration, it can easily become a speed machine in the hands of a skilled driver. However, rough driving can cause it to become uncontrollable, so crashes and pileups are a regular occurrence on the race track.

Due to being designed solely for racing, the M18 does not feature any functioning armament, which is probably for the best so as not to add to the ensuing chaos of a pack of M18s vying for the lead on a crowded circuit.

The key to winning in the M18 is to go fast, and stay fast. Since your only opponents will be in the exact same vehicle as you, the race is decided in how well you can handle corners, and how little you crash. Take corners with care, but don't be overly cautious. The tracks allow you to abuse physics in a way that typical race cars could only dream of attempting, but the light weight often causes the tank to veer violently out of control in a turn. Use the terrain to your advantage, but avoid traversing rough ground at high speeds. Racing is an artful balance of speed and strategy.