Wanted to ask, have anyone else noticed that bottom of this vehicle's hull seems to block APHE shrapnel?

It doesn't seem like protection analysis agrees with this, but it's almost impossible to damage hull of this tank in-game even on direct hit with Japanese tanks. As in, it pens, but shrapnel only goes like 30 CM and then stops. And there was no transmission or anything like that on the front, at least on damage x-ray. Had no issue with brits (pure ap) as I remember. Had to hit ammo rack directly twice with APHE of Chi-Ri II to explode 10% of it (luckily it worked). Turret doesn't seem to have magic armour properties.

Not sure if bug or feature. I mean, I could understand with those RHA skirts, but why front can absorb damage like this is a mystery for me, as unchecking "external armour" does nothing. Pure AP seems to go just fine. If it's strange to someone else too, I'd have to try and make concrete evidence and go for bug reports.

Seems like it. JP, US and USSR aphe is kind of different. On a replay i looked at this tank explodes easily to T-34, though they fire towards the middle of it, not the bottom-front portion of tank. For JP tanks i specifically used Type 1 APHE found on the BR of 4-5, though i think the upgraded "Kou" misfires too, as i used it on Chi-To Late. I don't remember such problems with british AP, but those have a bit different mechanic. I'll try to get more tries on this to get a screenshot, but last time i tried i had to go through jumbo 1v1 and we just basically broke eachother so much i couldn't even aim gun at the m6a1. As for that guy, he then went to duke it out 1v1 with other M6A1 point blank, but they only could fire at eachother's hull, and he had 3 direct shots at the other guy's hull from the side (at that angled plate near to MG on "second tier"), and as server replay says it didn't have much issues. The last shot was aimed to the middle of the tank. Kind of why i'm wondering if it was just a minor bug i had or is it specifically the bottom of the tank or something else. --bangerland (talk) 18:48, 6 May 2019 (UTC)

Managed to salvage old replay, here are screenshots to kind of show what i mean. Sure, it's not the "frontal" bottom shot, but i assure you same thing happens. 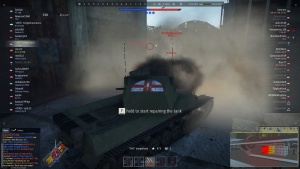 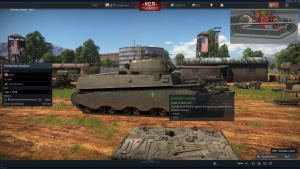 What game thinks it must do

I mean it kind of makes sense, if APHE explodes before entering the hull (though i shot it at flat angle with 1.3m fuse) and i would just turn blind eye to that, as it's a legit game mechanic, but when shell enters from the front there is nothing to stop the shrapnel. How it happens to take no damage is beyond me. My only guess is that shell "hits" something and "breaks" before exploding or something, but i thought that's mechanic only for APDS? --bangerland (talk) 19:45, 6 May 2019 (UTC)

The only reasonable explanation for erratic X-rays i had is this: By some RNG god's will i always hit this miniscule part of M6A1 hull, and APHE detonates downward, barely penetrating the hull, and then expiring itself instantly. But even then, even the protection analysis goes all random, like showing that actual shell ricochet up, while some part of it still goes on. And even then it says, that it must do "some" damage, not see strange "penetration" and then random explosions, which don't do any damage. I guess if nobody else has this weird survival capability, then i'll just drop it as just me being very lucky with this. --bangerland (talk) 20:30, 6 May 2019 (UTC) 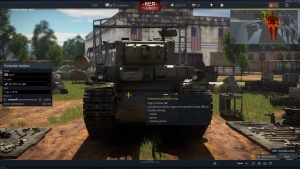 Sort of what happened to me in game. Though in mine case it literally did no damage, despite actually detonating inside of the hull. Or so it said.
Retrieved from "https://wiki.warthunder.com/index.php?title=Talk:M6A1&oldid=23461"