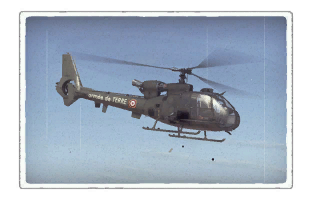 Initially designed by Sud Aviation in 1966, the Gazelle helicopter project (SA.340, SA.341 and SA.342) was continued by Aérospatiale as a French five-seat transport, scout and light attack helicopter manufactured in both France and the United Kingdom. Manufacturing licenses were granted allowing a Yugoslavian company SOKO and the Arab British Helicopter Company in Egypt to also produce these aircraft.

The Turbomeca Artouste Astazou IIB turbine engine powers the Gazelle. Initial testing of this helicopter utilised a standard tail-rotor taken from the Alouette, however, design changes switched to a Fenestron-style tail, the first helicopter to do so. The Fenestron tail or "fantail" differs from a conventional tail rotor as it contains eight to eighteen blades housed within the tail unit of the helicopter. Advantages of the Fenestron include substantial noise reduction, protection of tail rotor damage from contact with other objects and protection of ground personnel working around the tail section. With the aid of the Fenestron tail, the Gazelle was the world's fastest helicopter in its class during its early years.

The SA 341F Gazelle is armed with:

The SA 341F Gazelle can be outfitted with the following ordnance:

In Helicopter Battles [PvE] the Gazelle is notably better than either of the two preceding helicopters, finally unlocking AAMs with a greater range (5.5km) than 3/4km ATGMs. However, due to the limited armament (2 missiles), the Gazelle is limited to strafing ground targets and trying to lock onto enemy planes.

The Aerospatiale SA.341 was developed to meet a French Army Light Aviation (ALAT) requirement for a new observation helicopter to replace the Alouette II. Aerospatiale designated the project as X 300, but the prototype's designation was SA.340.

The prototype first flew in 1967, and it seemed outwardly similar to the Aloette II. It did use the Astazou II powerplant and transmission system, but there were a number of differences. For one thing, it introduced a fully enclosed fuselage and a cockpit with seating and controls for two pilots rather than one (although it could be flown by only one). Also introduced on the SA.340 were the fenestron - a shrouded tail rotor - and the Bolkow-type main rotor.

The British became interested in the project as the SA.340 was nearing completion, so a joint development and production sharing agreement was signed on 22 February 1967; it was officially confirmed in 1968. The first prototype (SA.340.001) flew for the first time on 7 April 1967, and the second prototype first flew in April 1968.

On 6 August 1971, the first French production SA.341 (SA.341.1001) was cleared for test flights. The production version had a longer fuselage, a larger tail, and a more powerful Astazou IIIA engine.

The SA.341F Gazelle was a French Military light support version of the SA.341 Gazelle, which had the improved Astazou IIIC engine. 166 were produced, and many were armed with a GIAT 20 mm M.621 cannon in a nose turret. They could be armed with rocket pods, Euromissile HOT anti-tank guided missiles (ATGMs), or Mistral air-to-air missiles (AAMs). A number of SA.341F Gazelles remain in service with the ALAT.