A Japanese Daihatsu-class Landing Craft is an AI-controlled naval unit, playing a role of one of the goals in a number of missions, either to protect or destroy. Among others it was used in the Battle of Luzon during the Season: Attack from the Sea. In the game itself the boat is marked only as the "Landing Craft", however its full name is being used in an in-game files (being marked as jp_daihatsu_landing_craft). 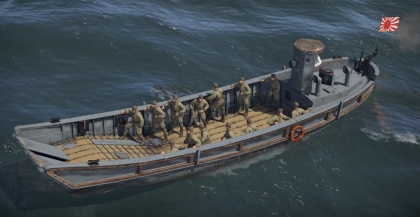 Landing Craft is easy to destroy even with a low calibre machine guns. It's protected by 4mm of rolled homogeneous armour on the hull, which is not enough to prevent its destruction from a direct hits. It is, however, one of the smallest naval targets in the game. Occasionally one can find less experienced pilots unloading an entire magazine right under or over the boat, thinking that the bullets scored hits, while in reality Landing Craft continues unscratched.

Daihatsu exists in a two versions, standard and light, they're otherwise indistinguishable, but the light variant has half the survivability of it's heavier equivalent.

The boat has a maximum speed of 80 km/h and the 5 km/h reverse. In game boats are either stationary, or follow pre-determined path in a straight line and equal speed, making for a very predictable targets, even for the high altitude bombers.

Defence is provided by a single 12mm machine gun that will engage targets up to 1000m away, providing a perfect coverage of 360° horizontal, +90°/-10° vertical, in effect having no blind spots. Machine gun will shoot even through the boat with no negative effect. It's firing a magazine full of yellow tracer rounds with a significant spread. While a lone boat poses little threat, Landing Crafts are always moving in a group, mutually covering each other, what might lead to kills against less careful airplanes. 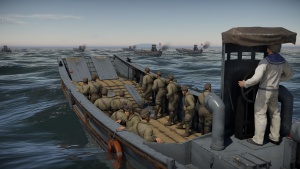 AI target boats are used primarily as an objectives, with Landing Crafts being the most basic AI-controlled naval unit. They're used in a low-rank battles, not requiring anything but a basic machine gun every reserve unit has to destroy it. In a World War missions they are being used for the fleet Convoy encounters.

Boats were first used in combat on 29 February 1932, during the Shanghai incident landing IJA's 11th Division behind enemy lines blocking enemy from receiving supplies and reinforcements that lead to a withdrawal of the Chinese 19th Route Army. This operation was studied carefully by US intelligence, with photographs of the boats provided to the Andrew Higgins who copied the design into LCVP.

Landing crafts were built till the end of World War 2, with one of the last reported combat uses being a supply delivery on the Kaladan River. It took place on 10 May 1944, as a part of the U Go offensive (Burma campaign), where boats were camouflaged with bushes and armed with Type 92 heavy machine gun. It's estimated that 6000 boats were built for both: Army and Navy.

Nowadays two sunken Daihatsu landing boats are available as a scuba diving attractions on the Maritime Heritage Trail in the Saipan lagoon. 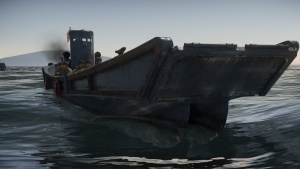 W-shaped bow of the Type D in the game

Furthermore, a number of derivatives were produced, such as 木製大発動艇, the Large Wooden Boat.

Interestingly, boats were very heavily modified, both: by the shipyards and in the field by soldiers. Engines were never standardized, being changed depending on manufacturer, time and even swapped by crews, however roughly 60 hp diesel engines were the most common. Additional armor was added, either welded on the hull or attached by other means. Boats were also armed, some of the most notable weapons mounted on Daihatsus included:

W-shaped bow assisted in on-shore operations, where ridges bite into the sand or pebbles of the beach allowing for smooth unloading despite waves, in particular for armoured vehicles and supplies. Similarly, it enabled easier retreat, as the boat did not have to beach so far inland.

Boat's armour protected occupants from a direct machine gun fire, with a reports of surviving even a 40 mm Bofors hits. However, due to boat's very small size and high manoeuvrability they were a difficult targets, making such reports rather questionable, with near misses or ricochets being more likely scenario.

Design specifications for the Type D called for a capacity of 90 soldiers, 10 horses or a single Type 89 I-Go medium tank. With a mass of 12.8 tonnes it defined the maximum carry capacity. Throughout the war other armed vehicles were also transported by the IJA, notably Type 95 Ha-Go light tanks or the Type 97 trucks.