Difference between revisions of "ZPRK 2S6" 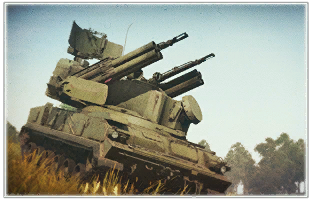 In this mode the ZPRK 2S6 Tungushka can excel in many different ways. Traditionally it can take down aircraft with ease no matter how far or how close they may be with its excellent combined power of the very fast firing quad 30mm autocannons and the highly agile SAMs it has in its disposal. however, if need be the Tungushka can be an excellent flanking or support vehicle by ripping apart enemy gun barrels or tracks which would disable them for your allies to finish off. of course with the AP-T belt, the Tungushka can rip apart enemy tanks/MBTs from the side or rear with relatively good shrapnel (for a 30mm) and range (as it is an AP-T belt). This makes the Tungushka very versatile in combat despite being labelled as an SPAAG. However, its best to keep in mind that you have very little armor and you are a relatively large target which means you are very fragile in direct combat/brawls especially with artillery around you. So being careful and selective of how you should play during a specific time is essential