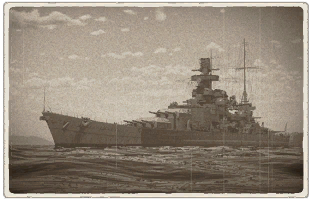 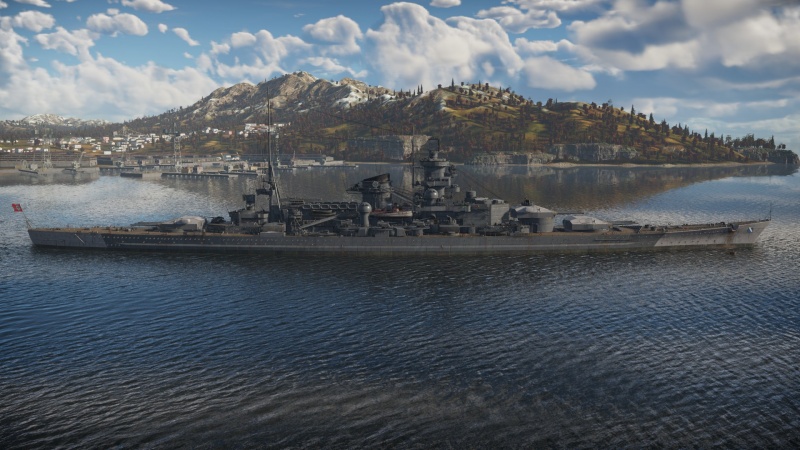 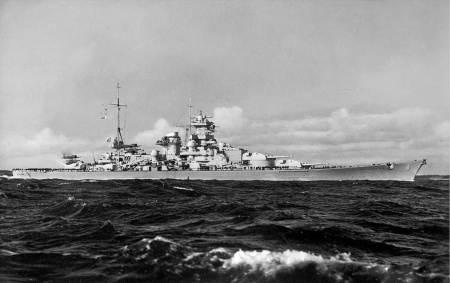 Scharnhorst was a German battlecruiser (or battleship depending on classification) that served in WWII, the lead ship of her class.[1] Designed to counter the French Dunkerque-class battleships, Scharnhorst was a significantly-enlarged and improved development on the previous Deutschland-class pocket battleships (“panzerschiffe”).[2] Scharnhorst operated with her sister ship Gneisenau during the early years of WWII, wreaking havoc on allied shipping. However, she ultimately met her demise at the Battle of North Cape, where she was sunk by a large British force led by the battleship HMS Duke of York.[3]

Following the end of WWI, Germany’s navy was significantly reduced by the Treaty of Versailles, which prevented Germany from owning any modern battleships.[2] As a result, the German Navy (Kriegsmarine) pursued an innovative type of vessel: pocket battleships (“panzerschiffe”: armoured ship) that were small enough to be classified as cruisers, but carried battlecruiser-calibre armament.[2] And thus, Germany built three ships of the Deutschland class of “pocket battleships”, armed with six 11-inch (283 mm) guns and displacing ~10000 tons each. However, these ships were still inadequate to deal with the Royal Navy’s battlecruisers, as well as the new French fast battleships Dunkerque and Strasbourg.[2][3] Following the negotiation of the Anglo-German naval agreement, allowing battleship construction, the German government cancelled the 4th and 5th ships of the Deutschland class and proceeded with a new design.[2] 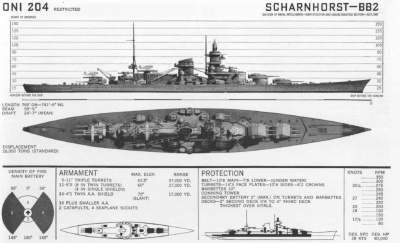 The new ships were significantly larger and better-armoured than the pocket battleships. Scharnhorst had a displacement of 32 100 tons standard and 38 100 tons fully loaded: a ~20000 ton increase from the Deutschland class.[3] The ships retained the 11-inch guns of the Deutschlands but gained a third triple turret, bringing the total to 9 guns. While these guns were quite impressive, with a 17-second reload time, they were limited in effectiveness against the armour of enemy battleships.[2] As a result, the ship was designed to be rearmed with 15-inch (381 mm) guns in dual turrets, but the opportunity for this refit never arised.[1] In addition to the main guns, Scharnhorst had twelve 5.9-inch (150 mm) guns mounted in amidships turrets.[2] Anti-aircraft armament consisted of fourteen 4.1-inch (105 mm) dual-purpose guns in twin turrets, sixteen 37 mm and ten (later sixteen) 20 mm anti-aircraft guns.[1] Scharnhorst had two Seetakt radars for fire-control, with a range of ~16 km.[4] She could also carry multiple Arado 196 seaplanes for longer range reconnaissance.[3]

Scharnhorst was designed with a heavy armour belt, up to 12.5 inches of Krupp cemented armour at the waterline.[3] Her main gun turrets had up to 14.3 inches of armour while her deck had up to 5.9 inches of armour. Scharnhorst was massive, at 234 metres long,[4] and had a crew of 1840 men.[1] Her three steam turbines allowed a maximum speed of 31 knots (58.3 km/h), though at this speed, the ship was unmaneuverable: during her sea trials in 1939, Scharnhorst took on so much water through the bow that a refit was necessitated: her bow was redesigned with a flared “clipper-style” bow that prevented the forward “A” turret from firing at 0-degree elevation.[3][4] 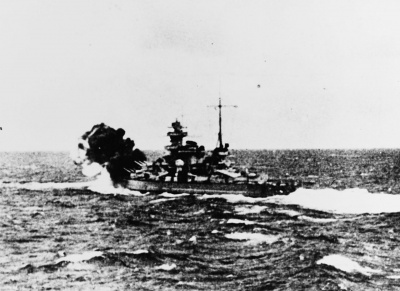 In 1940, Scharnhorst participated in the invasion of Norway, where she had a short engagement with the British battlecruiser HMS Renown.[2] This combat resulted in heavy seas-related flooding to Scharnhorst which put her “A” turret out of action; Scharnhorst spent the month of April 1940 in drydock for an overhaul to her gunnery and propulsion systems.[3] Two months later, Scharnhorst and Gneisenau stumbled into the British light carrier HMS Glorious along with her escorting destroyers Ardent and Acasta. In the ensuing battle, all three British ships were sunk, with the loss of 1519 men.[3] During this engagement, Scharnhorst set a record for the longest range naval gun hit ever recorded, having hit HMS Glorious from a range of 24 km.[5] However, Scharnhorst was hit by a torpedo from Acasta, resulting in the deaths of 50 sailors and severe flooding which put the “C” turret out of action.[3][4] Scharnhorst spent the next five months in drydock for repairs.[3] 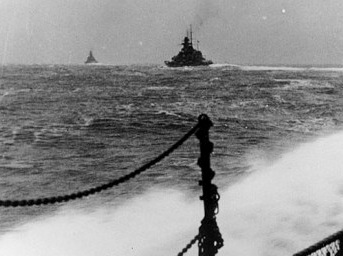 In January of 1941, Scharnhorst and Gneisenau broke out into the Atlantic to begin a raid on allied merchant shipping.[2] During this raid, Scharnhorst sank a total of 9 ships totalling 50 588 tons, while the two ships together sank over 110 000 tons of allied shipping. Both ships arrived at Brest in late March.[3] The ships were to participate in a massive Kriegsmarine attack in May 1941 alongside the newly-commissioned battleship Bismarck in the Atlantic.[2] However, British aerial raids on Brest resulted in Scharnhorst and Gneisenau being put out of action.[2] Bismarck would ultimately conduct the raid escorted by the cruiser Prinz Eugen, with disastrous results. 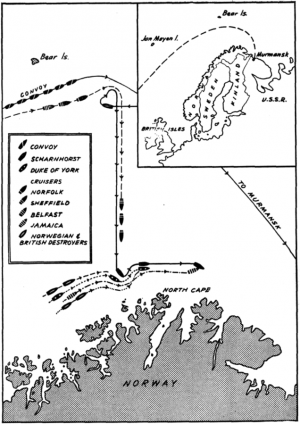 Scharnhorst would remain at Kiel for most of 1942, and in early 1943, she sailed with the cruiser Prinz Eugen to Norway to join the battleship Tirpitz.[2] It was with the German Norway squadron that Scharnhorst would meet her demise. In December of 1943, Scharnhorst attempted another sortie into the North Atlantic.[4] However, the British had intercepted German radio messages and were fully aware of what was happening. They sent Convoy JW 55B as bait, with an additional three cruisers as reinforcement. Admiral Bruce Fraser’s main fleet, sent to intercept and sink the Scharnhorst, was composed of the battleship Duke of York, heavy cruiser Jamaica and four destroyers.[4]

At 9 AM, Scharnhorst contacted the British cruisers Norfolk, Belfast and Sheffield.[3] Both sides exchanged fire, and at 12:41 PM, Scharnhorst unknowingly turned towards the Duke of York. At 4:20 PM, the forces made contact, and Scharnhorst was simultaneously engaged by Duke of York and the smaller escorting ships.[3][4][6] By 7 PM, all of Scharnhorst’s main-calibre guns and most of her secondary guns had been knocked out. Her engines were knocked out one by one, and at 8 PM, the German battlecruiser capsized and exploded.[3] Only 36 survivors were rescued from her crew of 1960.[3][6] The battlecruiser had fought valiantly, unescorted and completely alone against a British force of 13 warships: Scharnhorst had taken 19 torpedoes before she sank, along with hundreds of high calibre shells.[4][6] Scharnhorst’s wreck was discovered in 2000 at a depth of 300 metres.[4]