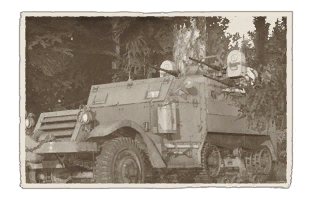 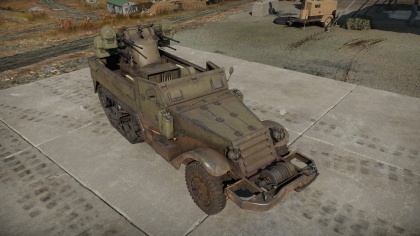 The Multiple Gun Motor Carriage M16 is a rank II American Self-Propelled Anti-Aircraft (SPAA) with a battle rating of 2.3 (AB/RB/SB). It was one of the first American vehicles to be released with the American ground tree in Update 1.45 "Steel Generals". Unlike its predecessor, the M13 MGMC, the M16 is equipped with not two, but four .50 calibre machine guns mounted on a Maxson M45 Quadmount to fight against enemy aircraft.

The point of the vehicle is to protect the team against threatening aircraft, it does so quite unusual when compared to other nations SPAA of this rank. Other nations SPAA come equipped with cannons, like the Sd.kfz 6/2 of Germany that comes equipped with the lethal 37 mm Flak 18. The M16 MGC uses several HMGs to shoot down hostile aircraft with a hail of bullets that focuses on volume-of-fire rather than damage-per-round.

As a half-track, the M16 MGMC is light and thus agile. While it has a high top speed, the acceleration is quite slow: expect a cruise speed between 40 and 45 km/h instead. The reverse speed is good, allowing you to pull out of dangerous situations. Like all WW2 wheeled vehicles, you can not turn on the spot and always need space to change direction. However, thanks to the rear tracks, your turn radius remains small at small speed. But remember that the faster you drive, the bigger the turn radius will be. Changing directions in a cramped street can be difficult with the M16 MGMC. The lack of neutral steering makes turning on the spot slow (4 km/h): make sure to build a little speed before turning and you'll turn faster (12 km/h). The offroad mobility is average: the M16 MGMC reaches 14 km/h when fording and 18 km/h when driving uphill. The M16 MGMC has a very high cruise speed on hard surfaces (solid ground, roads). While its high speed is an advantage, it can turn into a disadvantage when manoeuvring at high speed: the M16 MGMC starts oversteering when you turn because of its high centre of gravity and ends up skidding uncontrollably. Be aware of this before gunning towards the frontline: limit your maximum speed and anticipate the braking phases. As it is equipped with front tires, the M16 MGMC struggles on soft terrain (sand, mud, snow). Light obstacles (fences and bushes) will make you bleed speed and medium to large obstacles (posts, trees, concrete blocks and parked vehicles) will stop your vehicle: avoid them. 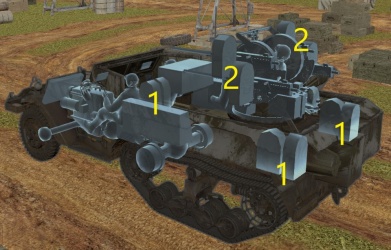 Ammo racks of the M16 MGMC

"The Meat Chopper" is inaccurate when enemy planes are operating at high altitudes, but in these cases, its function is more psychological than effective. Shooting short bursts at enemy planes at high altitudes will show them that the team is always covered by AA fire and it won't be an easy task a ground attack.

When an enemy is diving, the best way to defend the attack is by creating a thick fire curtain with prolonged bursts. The most vulnerable moment for aircraft is when they just dropped bombs or rockets and climb again. They´re flying very slow and become easy targets. Take care if planes are attacking. Fighters with their MG´s and cannons are a great menace. So start moving while firing and take cover behind trees or even buildings.

Watch out for remaining ammunition. The M16 MGMC has 800 rounds to shoot but reloading is very slow, making the M16 MGMC and the team vulnerable in the worst moments. More than 200 rounds is a good margin.

Don't try to do anti-tank tasks, the M16 MGMC is equipped with 50 cal. Machine guns are not as effective as cannons at fighting more armoured vehicles, as they have much less penetration, so stay at the spawn point and do anti-aircraft work. The machine gun tracers can reveal enemy snipers position shooting, allowing teammates to see them, but it's not advisable.

The role of a mobile anti-aircraft vehicle in the US Army was seen as necessary in order to protect ground troops from enemy aircraft at any place of their deployment. The first such development was the M13 MGMC, which was an anti-aircraft system of two .50 cal machine gun on the back of an M3 Half-Track car. The M13 served with some success, but by 1943 an upgraded version was in production.

The new vehicle in development was an improvement over the M13 MGMC from replacing the two .50 cal machine guns with four instead, while still based off the M13 design by using the M3 Half-Track as the chassis. The prototype was called the T61 MGMC, but once accepted at the Aberdeen Proving Grounds, it was designated the M16 Multiple Gun Motor Carriage. During the evaluations, some changes to the design were made, including the addition of a gun shield. Production started in May 1943 and continued on until March 1944 with the production of 2,877 M16 MGMC vehicles by White Motor Company. An additional 568 M13 and 109 T10 Half-tracks were also converted into M16 vehicles for a total of about 3,550 M16 units made.

The M16 MGMC saw service in early 1944, replacing the M13 that came before it. Deployment of the M16 MGMC is usually alongside the M15 CGMC, another anti-aircraft weapon equipped with a 37 mm autocannon as well as two .50 machine guns. The M16 MGMC was very popular with the troops as not only was it able to take down low-flying aircraft with relative ease, it was also used in an infantry support role where it earns the nickname "The Meat Chopper". The ability to provide covering fire with its four .50 calibre machine guns give the M16 a huge firepower advantage over the standard infantry and in some cases, were used to cut down trees where snipers were suspected to be hiding. The M16 also saw service with the Allies in the British Commonwealth and the Soviet Union, where they make use of it in the same way America did in anti-aircraft and ground support roles. The M16 saw service in the Italian Campaign, the French Campaign, and the Battle of the Bulge.

After World War II, the M16 MGMC still saw service in American forces in the Korean War, as well as by their South Korean allies. While still superb at a ground support role, the advancing technology in aircraft make them more advanced and durable to the .50 calibre machine guns and so its effect as an anti-aircraft gun has diminished. By late 1951, the M16 MGMC was declared a "limited standard" and were gradually retired from US service, though they continued to serve until the end of the US involvement in the Korean War. The M16 MGMC was finally declared obsolete by 1958.

The self-propelled AA weapon with the new turret went through trials and was accepted as the M16 MGMC.

The new vehicles were produced by the White Motor Company beginning in May 1943, continuing through 1943 and into 1944. In all, 2,877 units were assembled.

Almost all of the M16 MGMCs served in the US army's AA divisions, while an additional 70 were sent to the Free French army. The model was used primarily in the European theater to go along with a small number that saw action in the Philippines.

The M16 MGMC was successfully used against both air and ground targets, as well as to take out enemy infantry. It was also used somewhat widely by US army divisions during the Korean War, after which it was removed from service.