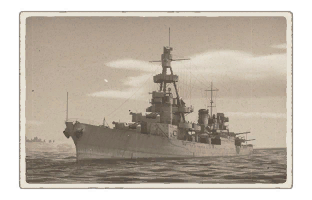 The Pensacola carries a main armament of ten 8"/55 Mk.15 guns in two triple and two twin mounts. These guns are the standard armament for American heavy cruisers, and pack an impressive punch. The guns have good ballistics, and can access four shell types: Mk.14 Common, Mk.19 APCBC, Mk.25 HC and Mk.17 SP Common. Of these shells, the Mk.17 Special Common shell is most effective against cruisers, as it has a great explosive mass and enough penetration for most cruiser main armour belts. The Mk.19 APCBC shell can be used against heavily-armoured targets, but has a relatively small explosive mass of 1.65 kg. Finally, the HC shell, with almost 10 kilograms of explosive filler, is highly effective against destroyers and unarmoured vessels.

The Pensacola carries a secondary armament of eight 5"/25 Mk.13 anti-aircraft guns, mounted on single open-mounts. These cannons are very effective medium-to-long range anti-aircraft guns, but are not effective against any armoured targets. They have access to just two shell types - Mk.36 AAC (HE-TF) and Mk.28 AAC (HE-VT). The former is a time-fuse shell (meaning that the fuze is set before the weapon is fired), while the latter is a proximity fuze shell that explodes automatically upon reaching the target. Both shells are ineffective against armoured targets, having ~35 mm of penetration. However, they are both capable of dealing with air and unarmoured targets quite effectively. The HE-VT shell is typically the better pick, as it offers greatly-improved efficiency against air targets.

The 1.1 inch/75 Mk.1 gun, otherwise known as the "Chicago Piano" (because it was the size of a baby grand-piano), was the standard anti-aircraft armament for most American ships prior to the introduction of the 40 mm Bofors cannon - Pensacola carries two of these quad-mount guns. These guns are mediocre at best; though they have a good fire rate (similar to the AN-M2 Browning), they aren't too effective at dealing damage, and also jam rather quickly. As well, take note that the gun doesn't have ammunition options.

Pensacola also carries four AN-M2 anti-aircraft guns. The AN-M2 is a navalised anti-aircraft version of the popular Browning machine gun. This gun is rather ineffective at dealing significant damage to enemy aircraft, and is only effective within ~1.5-2 kilometres at most. As well, keep in mind that these guns have a long 12-second reload after the gun's magazine has been used. 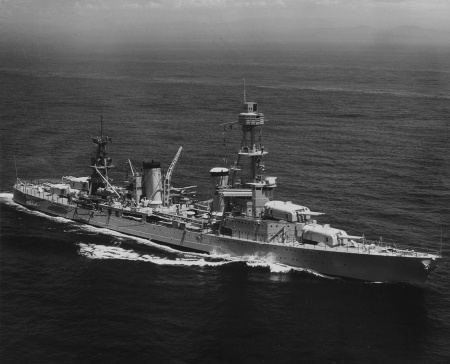 USS Pensacola underway in September of 1935.

USS Pensacola was the lead ship of the Pensacola class of heavy cruisers, built for the US navy in the interwar period. Built up to the limitations of the Washington naval treaty, she was the first class of "treaty cruiser" and also the first American cruiser to feature an 8-inch main armament. Pensacola saw extensive service during the Second World War, and was almost sunk by Japanese torpedoes during the Battle of Tassafaronga. After the war, she was used as a target during Operation Crossroads, and was later sunk as a target ship.

After the end of the First World War, the only major cruiser class of the United States Navy were the Omaha class - these ships ended up a disappointment due to their awkwardly-placed main battery and light armour. As a result, the United States Navy set out to produce the first new class of "light cruisers" - the Pensacola class. Due to the Washington Naval Treaty (signed in 1920), the ships could only be built up to 10000 tons standard. The first of these ships, Pensacola, was laid down in October of 1926 and completed by April of 1930. She was subsequently redesignated as a heavy cruiser (due to her high-caliber main armament) and became the first heavy cruiser class of the United States Navy.

Pensacola displaced 9100 tons standard and was 178 metres long. Her main armament consisted of 10 8-inch (203 mm) guns in a unique configuration - two twin turrets and two triple turrets, one of each being located fore and aft. She carried a secondary armament of eight single 5-inch (127 mm) guns on beam positions. Her initial anti-aircraft armament was sparse, but was improved over time. Pensacola was the first American cruiser to lack torpedo tubes - the American design of "gun cruiser" would be continued with all following cruiser classes except the Atlanta class.

Following her commissioning, the Pensacola joined the US Atlantic Fleet where she operated for the next four years. In 1935, she transited the Panama canal to join the Pacific Fleet at San Diego, where she would be based for the rest of her interwar career. She frequently participated in fleet exercises that took her everywhere from Alaska to Midway atoll. She was also one of six ships to receive the CXAM radar system in 1940, the first operational ship-based radar of the United States Navy.

Pensacola departed Pearl Harbour shortly before the raid and headed to the port of Brisbane in Australia after the attack. She then rendezvoused with Task Force (TF) 11, centered around the carrier Lexington. In April of 1942, she returned to Pearl Harbour and was reassigned to the Enterprise escort group. She was still serving in this capacity during the Battle of Midway, where planes from the Enterprise and Yorktown crippled the Japanese carriers Kaga, Akagi, Soryu and Hiryu, the core of the Imperial Japanese Navy. During the course of the battle, she was detached to the Yorktown's escort group, and provided anti-aircraft cover when the carrier was struck by Japanese torpedoes. She managed to shoot down six enemy torpedo bombers, but in vain, as the Yorktown was hit by two more torpedoes and had to be abandoned.

After the Midway battle, Pensacola returned to Pearl Harbour, and was reassigned to the carrier Hornet's escort squadron. She was still serving in this capacity during the Battle of the Coral Sea, and was providing AA fire when the Hornet was hit by multiple enemy bombs and sunk. She was reassigned to USS Enterprise, and provided cover as the carrier launched aircraft during the Battle of Guadalcanal. 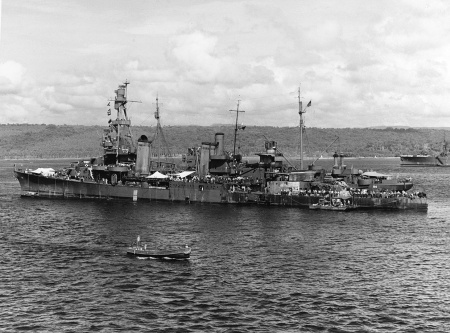 USS Pensacola alongside the repair ship USS Vestal after she was damaged by Japanese torpedoes at the Battle of Tassafaronga.

After the battle of Guadalcanal, Pensacola was reassigned to TF 67 (with four other heavy cruisers and several destroyers) to attack Japanese forces in the Guadalcanal area. On the night of the 30th of November, they encountered a Japanese transport squadron and promptly engaged them: this battle would be known as the Battle of Tassafaronga. During the battle, Pensacola, along with the other ships, spotted a Japanese troop convoy heading for the Solomons, escorted by eight destroyers. And thus began a short engagement limited by poor night-time visibility where the Japanese destroyer Takamani was sunk by gunfire. However, the rest of the Japanese destroyers were not fired upon, and launched a large number of Type 93 'Long Lance' heavy oxygen torpedoes.

At 23:27, the cruiser USS Minneapolis was hit by two torpedoes in her engine rooms causing her to take heavy damage. New Orleans, the second cruiser in line, took evasive action but was hit by a Type 93 that detonated her forward ammunition magazines and destroyed her bow. As Pensacola turned to avoid the two heavily-damaged cruisers, she was hit by a torpedo underneath her mainmast that caused severe damage - her engine room flooded and her oil tanks were set on fire. The fires then spread aft and eventually caused her rear ammunition magazines to detonate, causing further damage. Pensacola limped back to port, still on fire, with 125 men dead and 68 more injured.

Pensacola was given emergency repairs by the repair ship Vestal before proceeding back to Pearl Harbour for permanent repairs. She was fully operational again by November of 1943, and spent the last two years of war serving in various capacities. She participated in the battle of Leyte Gulf, and later served in the invasion of Okinawa as a fire support ship. At the end of the war, Pensacola was anchored at Adak Station in Alaska.

Following the cessation of hostilities, Pensacola returned to the Eastern theatre, arriving at Ominato Harbour in Northern Honshu. She then embarked on a long journey back home, repatriating two hundred American veterans to Pearl Harbour, and eight hundred more back to the harbour of San Diego. From there, she embarked on her final trip to Bikini Atoll in the southern Pacific, where she was to be expended as a target ship during the American nuclear bomb tests. She survived both drops, and was studied by the USN to determine the effects of the radiation. She was then finally sunk as a target ship in 1948. Throughout the course of the war, Pensacola received 13 battle stars for her service.