Difference between revisions of "Rank IX" 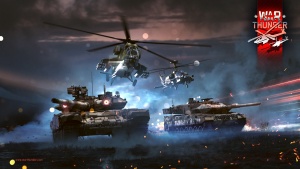 Almost from the very beginning of War Thunder’s development, we received tons of requests and thoughtful suggestions from fans for the introduction of modern military vehicles. We ran exhaustive in-game tests and, before the game’s release, implemented specific mechanics that would allow us to considerably expand the game’s time frame to accommodate combat vehicles from various eras.

Based on War Thunder’s expanded research trees, we’ll begin to introduce air combat and armoured vehicles up to rank IX. The top vehicles at this rank will include well-known machines of mass destruction, like the M1A2 Abrams, Т-14 “Armata”, F-22 Raptor, Т-50 PАК FА and many more. From the cockpit of these modern combat vehicles, players will experience reactive armour, unleash smokescreens, and deliver death from the skies with precision weaponry. Full research trees for all nations will be published at a later date, so stay tuned for that news.

So, without further ado, we’d like to invite players to participate in the first open mass testing of some of these rank IX vehicles. Players will be able to drive the Leopard 2A5 and the Т-90А, as well as pilot some of the the very first helicopters in the game, the Russian MI-35 transport and attack helicopter and the American GM-64 of the German air force. The test will be held in a special event, which can be accessed and joined directly from your hangar.

We hope you’ll enjoy testing these new vehicles as much as we’ve enjoyed implementing them. Thanks to your invaluable participation in this test, we’ll be able to build on what War Thunder does best and offer an even better experience for our fans.

See you on the battlefield!

The tank battle could be played either in arcade or in realistic. The spawn mechanic for arcade was similar to the naval battles: 2 free spawns in a tank, spawn points required for helicopters.

By joining the event as Germany or as Russia, the following vehicles were available to players:

The games could take place on 3 maps: