Difference between revisions of "M163"

Armor is not on the operator's side in the M163, as it is thin enough to be destroyed by 12.7 mm machine guns from the sides and rear, and any cannon-sized armament from the front. The turret is partially open, leaving the crew vulnerable to enemy light arms fire. If attacked, the best bet for taking a hit and surviving is to point the engine towards the enemy and hope it absorbs the shot.

A 20 mm M168 VADS, or Vulcan air defence system. The M168 is a variant of the M61 cannon, which is represented in-game in the Japanese T-2, and the American F-4C Phantom. Used initially during the Vietnam war, the M168 was a 20 mm air-cooled rotary cannon attached to a small turret on the M163. Dangerous to anything in the sky, it will lock on and rip through anything in its path.

The M163 has an amazing rate of fire with the M168 gun, thus it has amazing damage output. In an anti-aircraft role, it is best used as a point defense SPAA, defending a group of allies/cap zone from air attack. Its range isn't as good as the M247, so it's best to keep in mind the approximate 1 km targetting zone of the M163.

The M163 wields about 60 mm of penetration, and at the 8.0 battle rating, that's enough to mortally wound/destroy many Axis-country's vehicles such as the Leopard, AUBL, and Centauro. 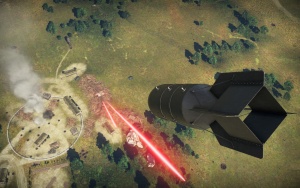 The VADS was used during the Vietnam war and onwards and was based on the chassis of the M113 armoured personnel carrier. NATO used it as an anti-aircraft gun platform.