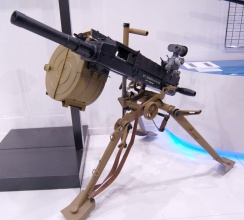 The AGS-30 in an exhibition.

The AGS-17 adopted in 1971 was improved upon with the introduction of the AGS-30 grenade launcher.[1] The new launcher, which had development started in the early 1990s by the KBP Instrument Design Bureau, was introduced in 1999 as a lighter, more accurate, and farther-hitting grenade launcher compared to the AGS-17, [2] as well as constructed with 40% fewer parts.[3] This was possible due to changes in the operating mechanism that allows a lighter breech body for firing from an open bolt (compared to the AGS-17's blowback operated closed bolt system), which consequently makes the weapon lighter with a faster firing rate.[4]

The AGS-30 (Avtomatischeskyi Granatmyot Stankovyi Automatic Grenade Launcher - Mounted) was adopted for Russian Army service in 2002, firing the same 30x28B mm grenades as the AGS-17 in belts of 29 grenades. Due to its lightweight construction of 16 kg with tripod included (compared to the AG-17's weight of 18 kg alone, with the tripod weighing 12 kg), the weapon could be easily used and moved by a crew of two soldiers in the infantry support role.[4] The AGS-30 can also be found as vehicle mounts as the AG-30M on AFV and helicopters with a remote-controlled turret.[1]

The AGS-30 is still in service today, alongside the AGS-17 grenade launcher that it was intended to replace.[5]