The weapons selector was introduced in Update "Raining Fire", it allows the player to select which type of primary and secondary weapons should be used. Once set up it allows the player to cycle through their primary and secondary weapons, and fire them with a single button. This is extremely useful for aircraft with multiple types of air-to-air missile, as different missiles have very different uses, and without the weapons selector you cannot chose which order to fire the missiles in. The weapons selector is also useful in many other situations; such as for aircraft with multiple types of bombs, allowing you to chose which order to drop your bombs in, or multiple calibres of offensive armament, allowing you to conserve certain ammunition for more important engagements.

Setting up the weapons selector

It is critical that you set up the weapons selector correctly or else you may find yourself in a situation where you are unable to use any weaponry on your aircraft. To begin with, familiarise yourself with the following controls:

After this, bind the "Switch primary weapons" and "Switch secondary weapons" controls. These are the keys you will use to cycle through your primary and secondary weapons, so bind them to something which will be accessible during flight. Finally bind the "Exit selected weapon mode" control, this will restore the weapon controls mode to the standard mode. 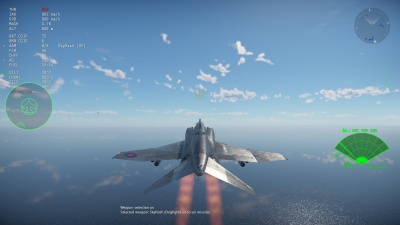 The HUD after just turning on the weapons selector. Notice the messages at the bottom of the screen, the ">" symbol next to selected weapon types, and the name of the selected missile being displayed.

The user interface with the weapons selector enabled can be seen to the right. The 20 mm cannon pod is the Phantom FGR.2's only primary weapon, so it is selected and marked with an ">", it can be fired by pressing the "Fire primary weapon" key. The currently selected secondary weapon is the AIM-9D Sidewinder, and so a ">" symbol has appeared next to the AAM label to indicate air-to-air missiles are selected. As there are multiple types of air-to-air missile available (AIM-9D Sidewinders and AIM-7E Sparrows), the name of the selected weapon has been displayed. The weapon quantity is listed as "7/3": the first number indicates that there are seven air-to-air missiles currently fitted to the aircraft, of which three are AIM-9Ds (the other four being AIM-7Es). The AIM-9Ds can be fired by pressing the "Fire secondary weapon" key.

When the weapons selector is activated all other weapon controls are disabled, this means that (for the example to the right) the Phantom's bombs cannot be dropped using their normal key bind. Instead the bombs must be selected by pressing the "Switch secondary weapons" key until the ">" symbol moves to the bombs (pressing the key will cycle between each available secondary weapon; in this case AIM-9Ds, AIM-7Es, and bombs).

In the example below the Phantom FGR.2 is carrying four AIM-7E Sparrows, four AIM-9D Sidewinders and four 1,000 lb bombs. Without the weapons selector the player must fire all their Sparrows before they can fire their Sidewinders, however the bombs may be dropped at any time using a separate control. The "Switch secondary weapons" key can be pressed to activate the weapons selector and switch between firing AIM-7E Sparrows, AIM-9D Sidewinders, or bombs. As the Phantom FGR.2 only has one primary weapon (the 20 mm gun pod) it is always selected and can be fired by pressing the "Fire primary weapon" key. With the weapons selector active bombs cannot be dropped independently of the missiles, and must be selected in order to be dropped.