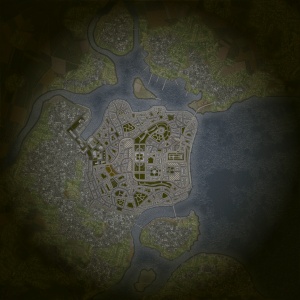 Sweden is a ground forces map available in all modes. It was added to the game in Update 1.97 "Viking Fury". As the name of the map suggests it is set in a Swedish town. The map consists entirely of urban built-up area, although there are some parks and other open spaces which allow for slightly longer range combat; the battle area is littered with barricades and features providing cover, as well as allowing tanks to go "hull-down".

The north and south edges of the map consist of mostly two story residential buildings (some buildings in the north are taller), with wide streets and open parks, there is less hard cover available in these areas compared to other parts of the map. It is in these areas where the spawn points are typically placed.

The eastern edge of the map consists of a long promenade, with little in the way of hard cover. The area to the west of the promenade is mainly city streets with tall (5-6 storey) residential buildings, however there are some open parks and most notably an open area of raised land with a government-looking building and monument on it. A capture point is typically placed here and tanks can use the terrain or various concrete blocks for cover.

The middle area of the map consists of large open gardens with four large government buildings in the centre and a courtyard between them. Again players can use the terrain as well as concrete blocks and other objects for hard cover. A capture point is sometimes placed in the middle of the courtyard between the buildings.

The tank battles map is 4 km x 4 km, but this area is restricted in battles; see the table below for the exact battle area sizes in each mode. The air battles area is 32 km x 32 km.

This map is a fictional location inspired by the Gamla Stan district of Stockholm. Although the design of the map bears resemblance to the real life location there is very little similarity between the layout of the map and that of the real Gamla Stan.