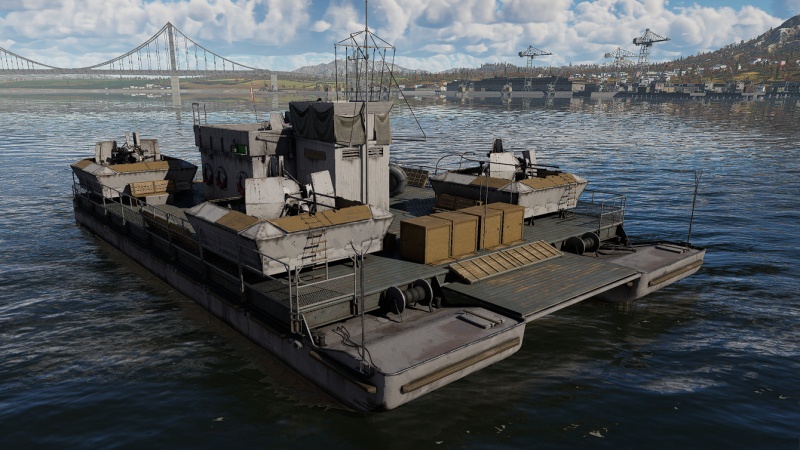 The 20 mm Flakvierling 38 cannons are among the best in the game. Compared to other 20 mm naval cannons in the game, these have the largest explosive mass in the HE rounds, the greatest AP penetration with the AP rounds, as well as a decent rate of fire and muzzle velocity. Altogether, this allows the SF40 Light to quickly destroy any enemy boat with a single burst, especially since 12 guns can be brought on target at once. Two problems exist for this gun: the relatively small 40-round magazines (which means frequent reloads), and the maximum range of roughly 2.5 km (common for most guns of this calibre). The latter is a much greater issue. Whereas faster vessels with such a problem can evade or quickly get behind cover, the SF40 Light is essentially a stationary target for weapons like Bofors L/60 Mark 1 (40 mm) or large-calibre cannons (3-inch or larger). Boats armed with these can comfortably sit outside the SF40 Light's range and gradually chip away at the crew. This is even further accentuated when faced with destroyers, since they carry much larger guns and are generally unaffected by the SF40 Light's own 20 mm cannons (albeit you would still be able to kill their crew off by aiming at their superstructure). Armoured targets may also be an issue, despite the above-average penetration of the 20 mm cannons. While the 3,7 cm FlaK-Lafette C/36, with its higher penetration, can be used against such enemies, it cannot be fired directly forwards, nor can it hit any targets within approximately 1.5 km due to its maximum depression being 1° above the neutral position. It's often better to just pepper such targets with 20 mm AP and leave the 37 mm for anti-aircraft purposes.

The SF40 Light should obviously be angled in such a way that three of four turrets are on target at once to maximize damage. At the same time, though, it should be angled as little as possible. This not only shows as little of the side and as possible, but it also allows the middle of the three Flakvierling 38's to block the line-of-sight to the deckhouse. Protecting the deckhouse is vital because it contains roughly half of the available crew. However, if it has already been destroyed, angling like this is no longer so important. The other major weakness is the ammo racks, which cannot be removed by taking less ammunition. Close-range enemies on the side are a big threat, since here, it is easiest to hit the ammo racks, especially when taking advantage of the hit cam. Though ammo rack destruction is quite rare in practice, a knowledgeable enemy player can still quickly eliminate the SF40 Light with this method. Aside from these points, survivability of the SF40 Light tends to be very high because of its size and large crew complement.

Enemy MTB torpedoes can be a threat, but only if launched at close-range, where the SF40 Light won't be able to evade in time. In this respect, long-range torpedo attacks aren't much of an issue, provided that they are spotted early enough. Even if torpedoes cannot be completely avoided, it should be noted that torpedoes can pass under the centre of the SF40 Light if necessary, between the two pontoons. Comparatively, greater threats are aerial torpedoes and rockets, guided bombs like Fritz X, and large bombs like H.C. 4,000 lb Mk.II (4,000 lb) or FAB-5000 (5,000 kg). Because of the SF40 Light's large size and slow movement, it makes for a prime target, while the SF40 Light's sluggishness may make evasion of these entirely impossible. Enemy aircraft should be prioritized.