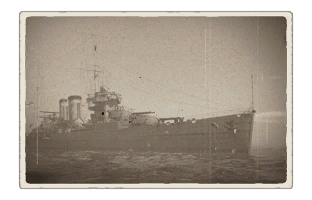 HMS York (90) was the lead ship of two York-class heavy cruisers built for the Royal Navy. She served in the North American theatre before the war, and escorted Atlantic convoys in the first part of the Second World War. She also participated in the British Norway campaign, and was later reassigned to the Mediterranean Squadron. However, while in service with the Mediterranean fleet, she was disabled by Italian explosive motorboats. Critically damaged, her wreck was abandoned by the Allies. She was salvaged and scrapped in 1952.

The York was based on the earlier County-class cruisers, the first 8-inch heavy cruisers used by the United Kingdom. Lighter than the previous 10-thousand ton County-class cruisers, the York displaced 8,250 tons standard.[1] The York carried eight 8-inch (203 mm) guns in four dual turrets; this was the standard armament for later British heavy cruisers.[1]She also carried two triple torpedo tube launchers. Her anti-aircraft armament was rather sparse, and was never improved sufficiently to grant her good AA performance. She could make a top speed of 32 knots (59 km/h), and had an endurance of 24,600 km at 22 km/h.[1]

The York entered service in 1930, serving as the flagship of the 2nd Cruiser squadron of the Home Fleet. Between 1934 and 1940, she served primarily with the North America/West Indies Station, though she was detached to the Mediterranean fleet for two years for the Italo-Abyssinian War.

At the start of the Second World War, York was based in Halifax as a part of Force F, a squadron tasked with hunting for commerce raiders and escorting convoys. She returned to the UK in late 1939, and underwent a refit before being assigned to the 1st Cruiser squadron of the Home Fleet. She also participated in the planned British invasion of Norway, and evacuated Anglo-French troops from Namsos following the German invasion.

In August of 1940, York was assigned to the 3rd Cruiser squadron of the British Mediterranean fleet. She participated in the Battle of Passero, where she sank the crippled destroyer Artigliere, and escorted the carrier HMS Illustrious during her raid on the Italian fleet at Taranto.[2] However, in early 1941, she was disabled by explosive MTBs of the Italian navy. German bombers further damaged the ship, which was considered to be damaged beyond repair.[2] As a result, the British abandoned the ship and destroyed its armament prior to their evacuation from Crete; the wreck was salvaged and scrapped in 1952.[1]