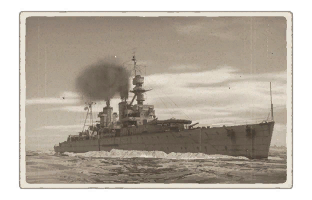 Like many other first cruisers, the Hawkins is an awkward ship, but does have its strengths. The 7.5-inch guns are very powerful for the battle rating, doing huge damage compared to the 6-inch (and smaller) cannons it can face. They also have a pretty good reload, meaning you can duel light cruisers to good effect. Unfortunately, the guns are few in number and spread out over the ship. You can only use six on a broadside, and they are painfully inaccurate due to their positioning, meaning long-range gunnery can be frustrating. Still, when they do hit, they can be deadly. These 190 mm shells can be a death sentence for destroyers, and other cruisers should be wary of them.

The Hawkins is slow for a cruiser, doing just 55 km/h even when fully upgraded. Repositioning can be difficult, and she isn't a fast turner either. Also, the Hawkins' armour is a mixed bag. The central belt armour can be difficult for destroyers and light cruisers to contend with, but the front and rear armour sections are pretty thin, and the deck armour is dreadful. Bombs and rockets can be especially dangerous for this ship. It also boasts a poor crew size, meaning fires can be especially dangerous.

The Hawkins does have a fairly adequate AA armament, though it pales in comparison to its German and American rivals. Its secondary armament is also nothing to write home about, with just four 4-inch guns, and only two on broadside. It's best not to rely on them. The Hawkins does also get torpedoes, and while they have a pretty weak distance (especially without torpedo mode unlocked), they're quite fast for British torpedoes, making them quite deadly to enemy ships at close range. 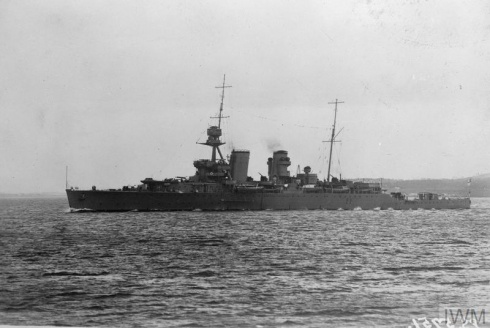