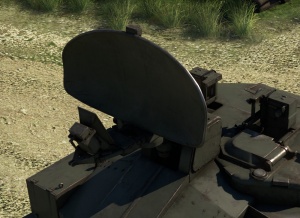 The DR-VC-1A atop the turret of an AMX-30 DCA (in this image the dish is facing backwards).

The DR-VC-1A is only a search radar, so cannot track targets by itself. However the AMX-30 DCA (the only vehicle which currently uses this radar)is also equipped with a separate tracking radar; this allows the it to continue using the DR-VC-1A radar to detect targets, while also tracking a target. The DR-VC-1A provides full 360 degree search coverage out to a maximum range of 15 km.

Compared to other search radars the DR-VC-1A has a somewhat lacking maximum range and a high minimum range. At 15 km the Range falls behind that of the many other search radars, but is better than that of the Marconi S 400. The radar also scans quickly, taking only 1 second to scan through 360 degrees. The minimum relative speed for detection is also only average.

The DR-VC-1A "Oeil Noir 1" was developed in the 1970s by Thomson-CSF (now called Thales Group). The radar was designed for use on self propelled anti-aircraft vehicles and was installed on some versions of the AMX-13 DCA (the version in game lacks radar), as well as the AMX-30 DCA.