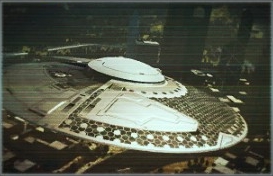 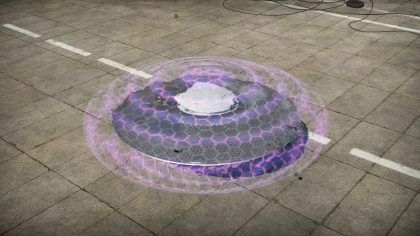 The UFO is the playable vehicle in the 2019 April Fool's Day event Earth Thunder. It was added in Update 1.87 "Locked On".

UFO is an extremely powerful craft, which excels at laser warfare. It can fly, swim, and even hover over ground with stunning speed. Its general purpose seems to be similar to current fighter VTOL planes, but more universal.

UFO can move in any direction effortlessly. The only drawback is it cannot move directly up or down without shutting down its weapons, so it's only done when situation is hopeless, or when stuck in some debris near to ground.

For this reason, dropping down to ground or attempting to emerge from underwater are often done via activation of "hover mode".

The UFO flying around Green Hills.

Whenever near to the ground or in Hover mode, UFO latches onto nearest objects and can easily throw itself over, or get stuck onto buildings, or even inside of them. It is also slower in hover mode.

UFO seems to be able to crash into ground at maximum speed and take no damage.

UFO is extremely angled and flat, and its computer immediately turns the craft towards targeting reticle, minimizing vulnerable surface.

The only real weak spot UFO has is the dome in middle of it. It's also believed, that the pilot resides inside of it. This area can only take about 1 second of laser fire or 1 railgun hit.

Whenever facing overwhelming odds, UFO can activate hover mode, to also activate active shielding. Shields can take punishment of any energy weapons for substantial amount of time, but prevents UFO from using its own. However, when attacked by more than three UFOs, the shield can still be overwhelmed over time. Shield also cannot stop rail gun shells.

The UFO is equipped with a variety of armaments depending on its status.

The UFO in its cruising status possess a laser beam.

The laser beam seemingly possesses unlimited range and unlimited ammunition. As such, it can reach out and effectively attack opponents up to 3 kilometers away. Due to its thermodynamic nature, it cannot attack targets under water. The mechanics of the UFO causes laser to the cease firing whenever UFO is moving straight up or down, the reason for this is unknown.

The UFO in its hovering status possesses a rail gun in place of the laser beam.

Due to the shields completely encapsulating the UFO, the switch over to the physical rail gun is needed. Due to this change, the rail gun has a tendency to fire lower than the targeting HUD indicates. While not as precise or rapid as the laser, one good hit to a weak spot can destroy its target. If target is in 1 km range from UFO, it can lock on it (using middle and right mouse buttons to select and lock) to make rail gun aim and fire on its own with great accuracy.

The UFO when traveling underwater in an aquatic status possesses two armaments available for use, a set of rail guns and torpedoes.

The rail guns are set-up in a shotgun-like battery to attack opponents, sending out an array of projectiles towards the target. These shells can even leave water and damage other UFO's, that hover above water with shields up. Even one hit from this weapon is usually fatal.

The torpedo can be used when the UFO is underwater, and can be camera-controlled. While they are not very manoeuvrable and reliable, they can help the UFO to take out opponents that try to deny water access from much safer distance. 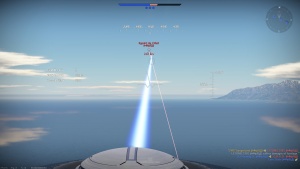 A glimpse of alien teamwork in action - distant UFO assist's it's allies by sniping unsuspecting opponents, as they turn over to fire at ground.

Laser warfare forces pilots to rely on teamwork a lot. Since UFO automatically aligns towards target, and pilot can dodge in every direction possible, it becomes rather hard to hit your opponent's weak spot due to this.

However, whenever UFO turns towards passing-by opponent, or tracks someone in general, it briefly exposes itself to fire from other directions. This can be easily abused either by "snipers", or "wings" of two to three UFO's. As example, it's easy for UFO to get destroyed in middle of a duel by a beam, that came from ground or space.

For this reason, if UFO is being chased by multiple opponents, they usually choose to retreat underwater, practice roll-less turns, or simply try to activate hover mode and try to lose their pursuer's interest that way.

The only concrete information known on the UFO is its extraterrestrial origin. From its flight profile, as well as corresponding information from file [REDACTED], it is suspected that a UFO of similar type was involved in the 1942 incident on the United States West Coast at the city of [REDACTED]. Its most recent sightings was at the Green Hills city, days before the area's quarantine in 1992. Since then, bright lights have been seen flashing beyond the guarded barriers, but no direct observations have been made since.

In April [REDACTED], Operation [REDACTED] was successfully launched that led to the acquirement of a single UFO sample from Green Hills. It is currently held at Area [REDACTED] for studies.