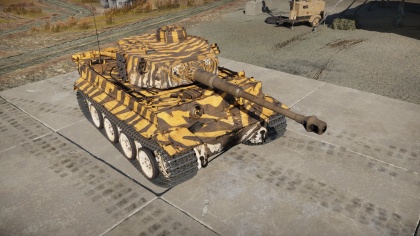 The ␠Tiger is a rank III gift German heavy tank with a battle rating of 5.3 (AB/RB/SB). It was made available during Update 1.77 "Advancing Storm" through the "Flying Serpent, Crouching Tiger" event which spanned from 31 March to 3 April 2018.

The Tiger is a famous heavy tank made by the Germans during WWII. It first saw combat in North Africa during 1942 against both American and British tanks like the M3 Lee. The Tiger is most commonly known for its blocky structure and 88-millimetre cannon. Used until the end of the war, it was fantastic in regards to its front armour, but had weaker armour on its sides and back.

This Tiger, often referred to as the "furry Tiger," is a Tiger H1 with a special orange, white and black Tiger stripe camouflage. It is considered a premium tank and as such comes with higher boosters, 30 free repairs and modifications unlocked. 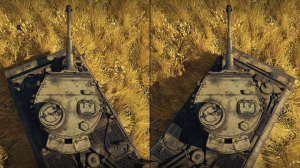 One may feel the need to charge head-on into battle, blaring that 88 mm gun as shells bounce off the front armour while the Schachtellaufwerk suspension system runs over the ground; this is a short-lived strategy.

The Tiger I should be played more like a bulky medium tank rather than a heavy tank despite its status, supporting allies from the sideline or from a distance rather than leading directly from the front. This is due to the poor armour arrangement with its "boxy" features, providing no sloping benefits alone. One must remain a distance, exploit the 88 mm long-distance power, and maintain a diamond-shape compound angling to maximize armour thickness against the trailing enemy shells that will inevitably come towards the Tiger's way. Ammo racks of the Tiger I.

The main role of the Tiger tank was to eliminate enemy tanks at a far range, similar to behaving like a sniping tank, or a Tank Destroyer. Nonetheless, the Tiger can excel at brawling with other tanks at medium, even possibly against two Panther tanks to close range and escape undamaged. It's recommended to not stay in one place for too long or risk getting outflanked, spotted, or bombed.

While guns like the Soviet 85 mm cannon can easily penetrate the Tiger at close range, the Tiger can stay nearly invulnerable at long range. The 88 can take out any tank on Rank 3 at any combat range but may have problems with the IS-1's 120 mm front amour at some ranges. When having to close in a bit, it is generally advisable to angle the hull to the sides by about 30°, improving the armour rating enough that it can keep away 85mm shells very well, even at closer ranges. The Tiger is still vulnerable to the SU-152s howitzer and its HE shell at any range. So whenever encountering these heavy-calibre vehicles, it should be prioritized and eliminated first.

Mobility-wise the Tiger is pretty good for a heavy tank. It is much faster than a KV-1 and about as equally fast as the IS-1, although medium tanks like the T-34-85 can easily outmanoeuvre all three at close range. Try to use the Tiger's mobility to keep a distance rather than for closing in on a target. Don't be afraid to use the speed to fall back if necessary as the Tiger cannot survive close range engagements on open terrain vs. mediums, due to the slow turret and the vulnerability to the 85mm guns on Soviet medium tanks.

The Tiger has a very bad turret traverse, it is recommended to get the Turret Drive traverse modification as fast as possible. Even then, the Tiger will have to turn the tank in the direction of the traverse to make the most of the time to quickly engage a target. This, together with very exposed ammo racks on both sides (though one side can be emptied by reducing the ammo stowage) means that facing multiple enemies at once is almost a certain end to the Tiger tank. The best option is to take cover from one tank and fire on the other.

As far as ammo is concerned, the default PzGr 39 will be the standard AP rounds many players will use. The second AP round available, the Pzgr., is also a good round to use against the enemy as the shell contains more explosive filler than the default, but suffers from a lower penetration value compared to the PzGr 39. The HEAT rounds offer consistent penetration at all ranges including more than 2000m. However, they provide less damage upon penetration. HEAT rounds usually are usually not used as the primary ammunition type for this sole reason. Upgrading the tank should mainly be dedicated to turret traverse, hull traverse (as this is needed even with the turret traverse upgrade) and engine upgrades. The Tiger's 88 has massive destructive power. Unlike the other German tank of its rank, all armed with 75 mm guns, the Tiger can easily one-shot all the mediums like the T-34s, M4 Shermans, and still be a threat against heavy tanks like the IS-1s. If it doesn't destroy a tank in one hit, most of the enemy crew will be wounded or incapacitated. The best place to aim with the 88 is either at the gunner's side of the enemy turret to incapacitate an enemy's firepower, or between the driver and the gunner which would usually wound or knock out most of the enemy crew at once. Attacking from the side also presents a good shot opportunity, as the best shot placement is right below the turret on the hull where most of the tank ammunition are stored, giving a big chance for an ammo-rack explosion.

When driving the Tiger, plan ahead on where it will drive. Even with engine and track modifications, the Tiger is still a heavy tank and a 90 degree or more turn will almost always mean an immediate standstill as the tank try to make the change in movement. Even small adjustments can knock the speed down a bit. Thus, knowing the terrain and destination is of the utmost importance to preserve its mobility to its fullest extent.

The Tiger is also best used on the flanks of the current maps, as these are usually more open and allow good use of its armour and excellent gun. The centre of the map would seem more logical as there are a lot of enemies, but as has already been established a Tiger taking fire from multiple directions won't last long. Going in a flank and taking down light and medium tanks is an easy task for this beast, and thus a flank can be easily secured if the Tiger is driven carefully. Then, work the Tiger into the enemy sides and rear of the main force in the centre, doing much more damage than if the Tiger faced the force head-on because a shot to the side and rear will set most enemies alight if not outright exploding the ammunition. Able to destroy vehicles in one hit, the Tiger can quickly jump from target to target and eliminate a good number of enemies in its lifespan.

There will be many hard eggs to crack such as the IS- Series, T-34 Series, American Jumbos, and several other tanks that will give the Tiger I trouble.