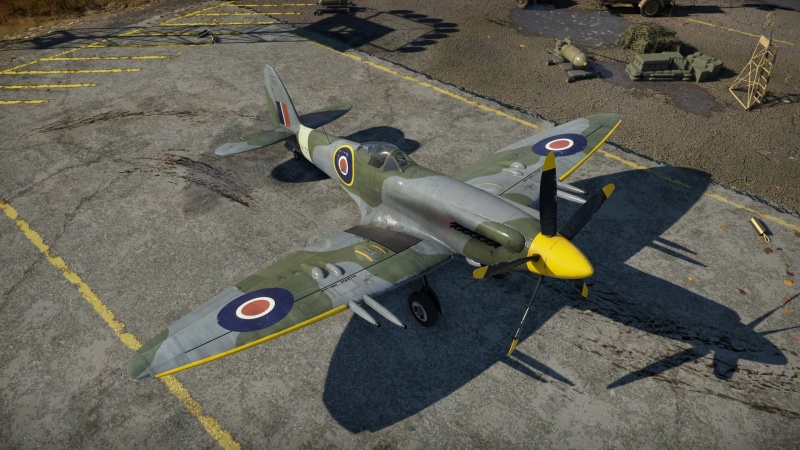 The Spitfire F Mk 22 can be outfitted with the following ordnance:

The Spitfire F Mk 22 an excellent plane in realistic battles with relatively few weaknesses, so the enemy will have a really hard time shaking the Spitfire off of its tail and only few will succeed.

The Spitfire F Mk 22 can keep up with most enemies in turnfights, excluding most Japanese fighters, other British fighters and several Bf 109s, all of which are more agile. Try to maintain a speed of between 400-500 km/h IAS; this is where the plane maintains great agility, turnfighting below this velocity against planes such as the Bf 109 G-14 is really not recommended. It is very important to avoid hard turning above 500 km/h IAS, because the plane may lose its wing.

The main task for a pilot is to utilize the great climb rate to gain an altitude advantage on enemy fighters (altitude allows you to control engagements). Target altitude should usually be around 5-6 km on smaller maps and 6-7 km on larger maps such as Norway and Spain. The main form of attack (especially when there are more fighters around the target) is Boom & Zoom. Energy fighting is an option too, if in a 1-vs-1 situation. The Griffon Spitfire is an excellent energy fighter, the Griffon engine provides a tremendous amount of horsepower which can be used to gain speed quickly and climb back at a safe altitude. Remember to maintain speed, altitude advantage, and judge the energy state before engaging an aircraft.

When fighting propeller aircraft, you should use your superior engine power and flight characteristics to your advantage. Fighters should be engaged based on their individual strengths and weaknesses. When facing Soviet fighters it is not recommended to duel them below 4,000 m. Maintain altitude and energy and get your guns on target. Do not commit to head-on attacks and do not burn all your energy in a turnfight with a Bf 109 or a Japanese fighter, this Spitfire handles differently to the previous ones in the series.