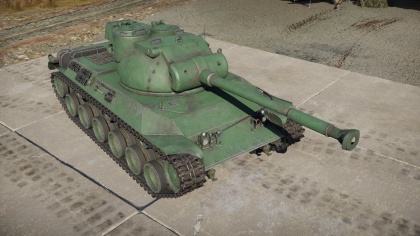 The ST-A2 is a rank IV Japanese medium tank with a battle rating of 6.3 (AB/RB/SB). It was introduced along with the initial Japanese Ground Forces tree in Update 1.65 "Way of the Samurai".

Armour on the ST-A2 is about the same as ST-A1, but there are some differences to its weaknesses.

For the turret, the commander cupolas was raised a bit and the pintle-mounted machine gun was removed. Overall it makes it harder to destroy tank with HE, but nothing more. However, the turret neck is no longer a weak spot for SPAA to exploit, but tank can still be destroyed by SPAA firing at MG port because their shells still cause spalling or explode and hit ammo rack despite it being rotated away from the weak spot. Still, it will definitely take them longer to deal with the tank that way. 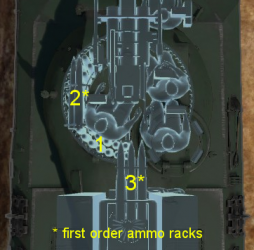 Ammo racks of the ST-A2

As the ST-A is Japan's first tank project for a new era of tank development, it shows the same gameplay issues as the Chi-Ha. The weak armour, the slow to mediocre turret rotation speed, quite a long hull and high drop-rate of shells.

The ST-A2 is an experimental medium Japanese tank, one of the first vehicles developed by Japan after the war. When the question of the need to develop new military vehicles came to the fore, Japanese experts with previous experience from the war got to work. The ST-A1 was the first step, and was intended to lack the main drawbacks of the American vehicles in service with the Japan Self-Defense Forces, more specifically their weight, size and their controls, unsuitable to Japanese tankers for physiological reasons. The development of ST-A1 began in 1954 and was ready by December 1956. The next stage on the path to the series-produced Type 61 was the new ST-A2, put into development in 1956.

The ST-A2 medium tank was finished by February 1957, and differed from the ST-A1 in a range of characteristics. The vehicle was made 20 centimetres taller and half a metre shorter in length. This reduction in length also allowed for a reduced number of lower track rollers and supporting wheels. The new vehicle had an altered turret shape which had been made longer, and its rear contained a compartment for a radio. With the aim of increasing the tank’s survivability, the upper frontal hull received characteristic side angles which increased the chance of a ricochet off the hull. The ST-A2’s tracks were also redesigned and equipped with more advanced cleats designed to raise the vehicle’s mobility and road characteristics. Other than this, its composition remained identical to that of the ST-A1. The diesel engine was housed in the rear of the hull, while the transmission remained in the front. The armament on this Japanese tank was American through and through. The 90mm M3A1 cannon was borrowed from the M46 tank, and it was accompanied by two different calibre Browning machine guns.

Only two experimental prototypes of the ST-A2 were built. They underwent testing, but were never accepted into service.