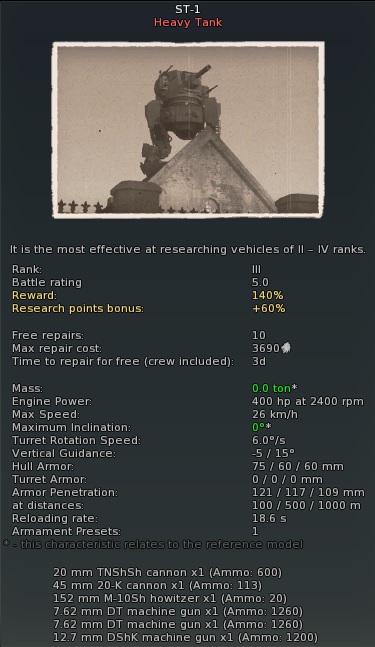 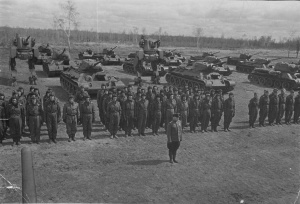 First teased several days before the 1st April on War Thunder's Facebook and Twitter with a silhouette image of the ST-1 and the sub line "War. War changes. Soon", People first speculated on some sort of Russian tank due to the resemblance to the KV-2 turret. At the same time the ST-1 was released, the SPS-255 tank along with "Unrealistic Battles" was also released. 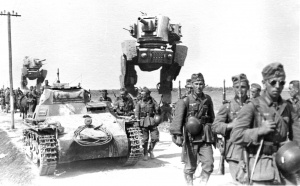 German troops on the march, captured ST-1 in the background.

Development of the ST-1 started even before the start of World War II. The first world war, which was also called "the trench war", showed an inefficiency in the usual infantry breakthrough and required the creation of an absolutely new type of ground vehicle - something that could cross destroyed roads and ground torn apart from explosions. This is what the ST-1 was about - the first and the only model of a walking tank.

In April 1937, Armour Command of the Red Army sent the military operational requirements to Factory #184, these were the requirements for the development of "an armoured machine of a new type" with a maximum mass of 50 tons, protected by at least 60mm of armour and the option to install different weapon types. Depending on the task of the battle machine, a 107mm cannon, a 122mm howitzer or 152mm howitzer could be mounted. Additional weapons were a 45mm cannon, a high-calibre AA machine gun and a 20mm tank cannon.

In spite of the complexity of the task the construction bureau of the factory managed to cope with the new design and the new battle machine (object 104 in the factory numeration) reached the factory testing stage which lasted for a year. During this period a considerable number of flaws were detected, these issues were eliminated as the tests proceeded. 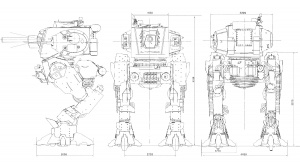 Central Archive of the Ministry of Defense of Russian Federation "Head armour command of the Red army Military representative's report on the execution of order for object 104":

"6 machines tested on the run. The following defects found: 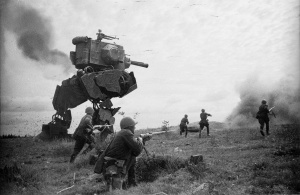 Soviet troops on the offensive, 1941.

In September 1939 after most of the defects had been eliminated, the development prototype obj. 104, (newly designated ST-1) was delivered to Moscow to be shown to members of the Soviet government and Red Army command. The demonstration of the new battle machine highly impressed the Soviet political and military leadership, and therefore it was decided to build a series of machines for operational trials. The new vehicles went through a baptism of fire during the Soviet-Finnish war. ST-1, along with new trial tanks the SMK and the T-100 had been sent to the front. Later, the ST-1 was changed to KV in the documents for disinformation purposes.

Not only did it have an extremely high cross-country ability, the ST-1 also was almost immune to anti-tank hedgehogs and mines. Even more so, thanks to it unique looks, it would spread fear and panic in enemy infantry ranks. 152mm howitzer allowed to destroy concrete pill-boxes with a minimal ammo expenditure. Finnish 37mm cannons could not penetrate the battle compartment's armour and Molotov cocktails were also useless due the high profile of the machine. The large "dead zone" of the main armament and limited range of vision were the main weaknesses. A successful combat deployment convinced even the most pessimistic military officials of the necessity to put ST-1 into mass production. 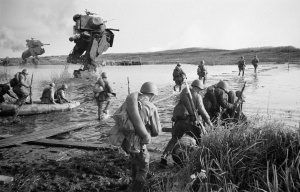 According to different sources by June of 1941 from 20 to 30 ST-1's were built. All of the aforementioned vehicles were deployed in the western military districts but by the beginning of the war, the machines were not fully mastered by the crews - also there was a lack of spare parts for repairs that resulted from a large amount of electrical failures In the course of the near-border battle in summer of 1941, all completed ST-1's were lost. But some of them were mentioned in German battle reports.

Due to the difficult situation at the front and the military factories' relocation to the East, a decision had been made not to continue the production of walking tanks and concentrate on less spectacular but more efficient, easy to master and repair vehicles with traditional running gear.

Variants of the ST-1 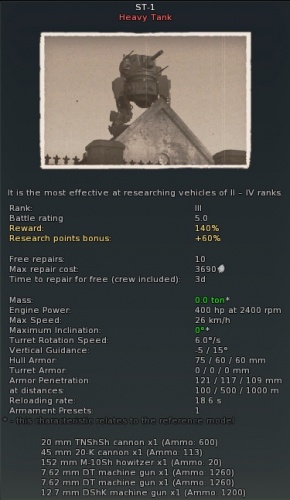 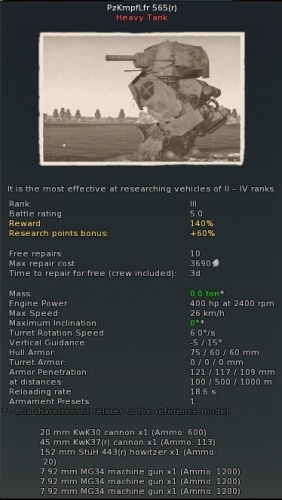 The captured German version of the ST-1

From the report of Wehrmacht's 14th tank division:

"... For the first time in the Eastern campaign we faced a new type of battle machine, it was hard to miss the complete superiority of a 55 ton walking tank….."

"...Our 5cm KwK. tank cannon could penetrate the armour only in vulnerable spots and at very close distances (below 200m)."

"...our tanks' armour cannot stop the 15cm armour piercing shells, and even close detonation of an HE shell often led to penetration of the armour by its fragmentation effect"

"... The existing facts and besides that, the impression felt that Russians know about their armoured walkers' technical superiority, should be taken into account and thoroughly investigated to avoid the damage that is being done to our armoured troops"

"... fight against Russian armoured walkers and tanks with 8.8cm flak cannons and 10cm tank guns cannot be enough on their own. Both weapon types are cumbersome and in most cases they are already discovered, under fire and destroyed while trying to reach an optimum firing position."

"...In order to counter Russian heavy tanks and armoured walkers the following detailed recommendations are presented for consideration: 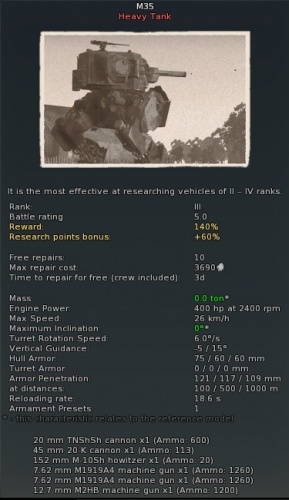 3 pre-production ST-1's were given to the US due to its technology exchange program. In Autumn of 1941 they were delivered to Aberdeen proving ground and were tested for 1.5 months.

What follows are the excerpts from the reports on the testing of the armoured battle machine of the new ST-1 type:

"1 . Armored Chassis: A choice of the armor angling for hull plates and turret points to an excellent shell damage withstanding capacity...

2. Armament: Firepower much higher than any of our own tanks, makes it possible to destroy almost any target on the battlefield, including permanent concrete fortifications. In addition, the additional armament of a 45mm cannon grants a high rate of fire whilst engaging lightly-armored targets. Additional machine guns are reliable, of a very simple design and easy to produce and to instal, there are possibilities of replacing machine guns with equivalent ordnance of our design.

3. Vision and aiming devices: The aiming devices installed are perfect though the vision devices are not fully sighted, but passable. Overall visibility ranges are good.

4. Powerplant: The engine is very light for its size, since most of its parts are made from aluminium. Persistence for portability is shown. High fuel and oil consumption rates. Engine cooling is not up to our (US) standards and if it won't be compensated by the engine design itself, then the engine lifetime would be dramatically reduced. An air startup system could prove additionally effective… This needs to be researched as a reliable additional and alternative method of startup.

OVERALL EVALUATION OF THE ST-1 TANK

Describe the vehicle in the game - its distinctive features, the tactics used against major opponents, recommendations for using the vehicle in different situations.

Pros and cons of the plane

Give advice for beginners - what the pros and cons of the vehicle, or what to expect if it would be in command of the enemy.

In 1942 a squadron of ST-1's were on a regular scouting mission on the eastern front, however unknown to them the day's event's would go down in history as one of the greatest unknown act's of the second world war. 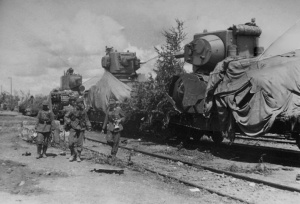 Ivan Froldov was the sharp thinking commander of the 2nd walker scouting unit located east of Stalingrad and his command vehicle was the some what unusual ST-1. Carrying the code name "Comrade Red Tovash" his unit constantly ventured far in to German territory for dangerous missions be that disrupting supply lines or reconnaissance on vital German positions. On April the first 1942 Froldov and his platoon of 5 ST-1's were ordered to take out a fuel depot supplying the local Panzer force "at all cost" (somewhat common phrase in his many orders). setting our at early morning they traveled 30 miles in to German territory to complete their task. the [re-planned route took them through a thick forest and a small valley to arrive at their objective. As they began their attack they came under heavy fire confusing the ST-1 squadron, they had not expected such an defense so early on. Under the intense fire they were forced to retreat in to a small contour. Ivan came to realise that they must have been spotted while in the valley. With their cover blown Froldov had weighed up his choices and gave the command "Give 'em hell or we'll get there first!". With that his crew traveled full speed towards the dump, his gunner Vladimir managed to destroy one Panzer 3 with the 152mm howitzer and a further 5 AT guns with the secondary cannons. His four wingmen supported him throughout the attack and within 10 minutes and with 6 tanks destroyed, the the Germans had begun their retreat giving up the the precious fuel dump. Calling back to their head quarters T-34's were soon in the area to reinforce the newly gained land. The five crew's miraculous achievement caused Stalin himself to say "Without men like this we can't win the war". The squadron did not go without casualties as Tovash 3 had a destroyed it's 152mm howitzer and Tovash 4 had somehow made it up onto of a two story building.

Secret post war documents show that the attack was also down to some luck, That day the defense of the fuel dump was reduced due to some tanks being moved out for an engagement further north and that most of the soldiers had never seen an ST-1 before and couldn't believe what they were seeing. there is also suggestions to that our glorious leader Kim jong Un is planning on making an improved version of the ST-1