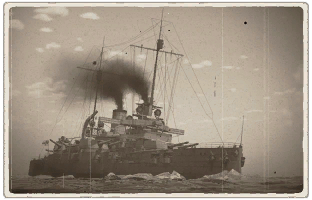 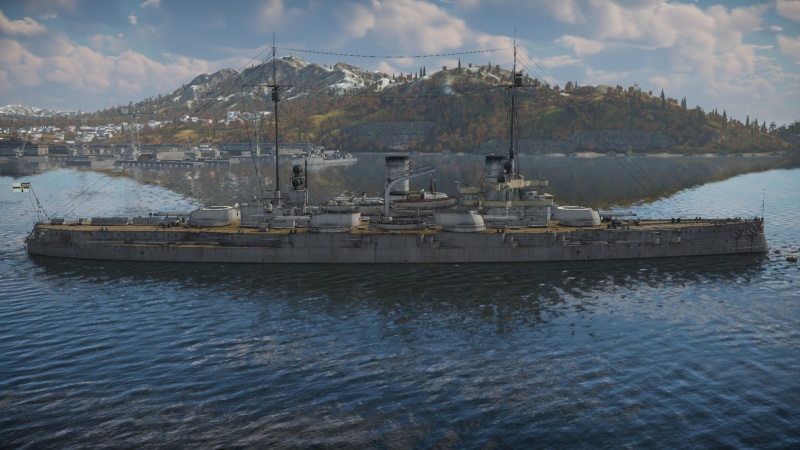 The Nassau-class, SMS Westfalen, 1916 is a rank V German battleship with a battle rating of 6.3 (AB/RB/SB). It was introduced in Update "New Power".

The SMS Westfalen is a dreadnought with an all-or-nothing armour scheme. This means she has thick armour all around the ship.

Her armour is rolled cemented "krupp" armour, which contains higher carbon steel on the surface and a softer core. The intent was to try shattering the shells with the tougher layer, while the softer core would absorb the shell's impact. This was one of the latest evolutions in armour designs used by dreadnoughts.

When it comes to survivability, her citadel is protected by a turtle back armour scheme in addition to coal bunkers. This should stop most shells from penetrating the important parts such as the ammo racks and the engines, while her 90-170 mm thick external armour will stop most destroyer's shells and high explosive rounds from all sources.

The ship has only limited of AA armament, and while bomber aircraft present a real danger, only Japanese torpedo aircraft carry a large enough torpedo to bypass her torpedo bulges, which are thick enough to stop all but the Japanese Type 91 Model 2 and Model 3 airborne torpedoes.

Having relatively little crew that's left exposed out in the open, the only places she'll lose crew easily are the 88 mm guns in the bow and stern, so it is not recommended repairing the ship just for fixing those, as it will put new crew inside them to be easily lost again.

Don't expect mobility from a dreadnought. She was made to take damage while sending it back to her opponent. Speed was much less of a concern than armour.

This gives her roughly 38 km/h top speed, which is quite slow. Not enough to evade easily any bomb attacks.

Her armament consists of 6 turrets, each with twin 283 mm cannons. This is rather weak compared to most other battleships who have 305 mm or even larger guns. However, these will still make short work of cruisers and destroyers.

The front, front-left and front-right turrets can fire frontally, pretty useful in dreadnought vs dreadnought scenario.

To use her firepower to its best, she will have to show a lot of broadside just to align a fourth turret. It is rarely worth it, unless the player wants to rely on her secondary too.

This is where she shines. Twelve 150 mm and 88 mm guns. Patrol Torpedo boats will have a hard time sneaking through that firepower. Even destroyers will fear your 150 mm cannons from afar. You can rely on these should your main turrets get destroyed, or to take out most PT boats.

She comes with four 88 mm AA cannons located center of her rear main turrets. These guns will always fire HE-TF shells, and are surprisingly effective against lateral and rear attacks from aircraft.

Her four 7.62 mm GM08 machine guns will not help much however.

As a dreadnought, she excels at taking hits while giving them. Her playground is small maps, where her secondaries can make short work of destroyers while her primaries take care of cruisers.

Due to her "small" 283 mm cannons, she will have more trouble facing other dreadnoughts who have larger guns. It's not impossible, just better to shoot at softer targets instead.

Her torpedo protection will stop most torpedoes set at 1m depth. You will however get severely damaged from 4 m depth torpedoes.

As with most German dreadnoughts, she puts the emphasis on armour and reliability instead of speed and firepower.

SMS Westfalen was a member of the four-ship Nassau-class, the first class of dreadnoughts built by the Imperial German Navy. Commissioned in 1909, she saw extensive service during the First World War, where she participated in many naval engagements. She was also responsible for the destruction of three British destroyers at the Battle of Jutland. Westfalen was damaged in 1918, and thereafter used as a training ship; she was later handed to the United Kingdom as a war reparation, and scrapped in 1924.[1]

The Nassau class was built to counter the British HMS Dreadnought, who had revolutionized modern battleship design. As a result, the Nassaus were the first ships of the German Navy to carry an all-big-gun armament. The ships were also the first German vessels to be equipped with a torpedo bulkhead.[1] The ships were intended to carry new steam turbines, but the German steam-turbine manufacturing process had not been refined; as a result, the Nassaus were equipped with large, space-consuming piston engines.[1] This also contributed to the installation of Westfalen's unique hexagonal main armament arrangement.[1] Westfalen was launched on July 1st 1908, and commissioned in November of 1909.

Westfalen displaced just over 20 thousand tons, and was capable of making just over 20 knots. She carried a main armament of twelve 11-inch (281 mm) guns in a hexagonal formation, with four guns mounted on the beam.[1] She also carried a large amount of 5.9-inch (150 mm) and 88 mm guns to counter smaller vessels and torpedo boats.[1] Later on, Westfalen was refitted to carry a small number of anti-aircraft guns; she initially carried six underwater torpedo tubes, but these were later removed.1[1]

German Battleship SMS Westfalen seen from the side. Her two beam turrets are prominently visible.

After her commissioning, the SMS Westfalen served as the flagship of the First Battle Squadron, replacing the elderly pre-dreadnought SMS Kaiser Barbarossa.[1] She served in this role until 1914, when she was slated to be moved to the Second Battle Squadron; however, these plans were put on hold following the outbreak of the First World War.[1] She then served as part of the screening force protecting Admiral Hipper's battlecruisers, which were shelling the towns of Scarborough, Hartlepool and Whitby.[1] She also served a minor role in the Battle of the Gulf of Riga.[1]

Westfalen participated in the Battle of Jutland, where she was at the rear of the German Battleship Formation. However, in the late evening, she encountered a light force of several British destroyers, and an ensuing firefight erupted at close range.[1] Westfalen scored several hits on the British destroyer leader Tiperrary, causing critical damage;[1] the destroyer was later finished off by her sister ship Nassau. She then fired multiple salvoes at the destroyers Fortune and Turbulent, critically damaging the former and sinking the latter. During this time, her bridge was hit by a round fired from a destroyer, which killed two and injured several others; the ship received no other battle damage.[1]

Following this action, the Westfalen returned to port for repairs. Several months later, she was yet again part of the screening force for Hipper's battlecruisers, this time for a raid on the town of Sunderland. However, Westfalen was struck by a torpedo from the British submarine E23,[1] which flooded her torpedo bulkhead with 800 tons of water. Despite this, the torpedo bulkhead held, demonstrating its effectiveness.[1]

In February of 1918, the ship participated in the Finland intervention by transporting troops.[1] She also fired her main guns in support of German Forces. In April, Westfalen completed this operation and returned to the First Battle Squadron; however, in August, she suffered serious damage to her boilers.[1] Thus, she was decommissioned and used as a training ship.[1] Following the conclusion of the First World War, Westfalen was handed over to the United Kingdom as a war reparation. Thus, she was scrapped in 1924 at Birkenhead.[1]

After the incredible HMS Dreadnought appeared, German shipbuilders began working on a new battleship design to succeed the British flagship.

Several new designs were created and considered as a result, but eventually the "G7b" design was approved by the Kaiser in March 1906, officially becoming the Nassau class. Shortly after, two of the new Nassau battleships were ordered with two further ships being added to the construction queue of German shipyards later.

SMS Westfalen was the last of the Nassau-class battleships to be laid down in August 1907, but the second to be commissioned into service with the Imperial Navy in November 1909. In the years leading up to WWI, Westfalen actively took part in routine fleet exercises and training courses with other elements of the Imperial Navy.

During the war, Westfalen, along with other ships of its type, actively participated in combat. The 2nd division (all ships of the Nassau type) of the 1st Hochseeflot squadron fought in the Baltic, and then in full force at Jutland, where they were especially active during the night phase of the battle. Initially, Westfalen, Nassau and Rheinland shot the destroyer Tipperary, and after that, a collision between Nassau and the destroyer Spitfire occurred where due to the extremely short distance between ships, the destroyer was below the sector of fire of the main battery guns, but was damaged by muzzle gases and barely escaped. Westfalen rammed and sank the destroyer Turbulent, and also participated in the sinking of the destroyers Ardent and Fortune. After Jutland, she took part in Operation Albion. Following the end of WWI, Westfalen was ceded to Great Britain as a replacement for some of the German ships lost to scuttling at Scapa Flow and shortly afterwards sold for scrap, being broken up between 1920 - 1924.