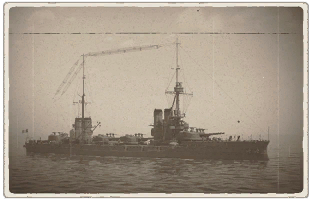 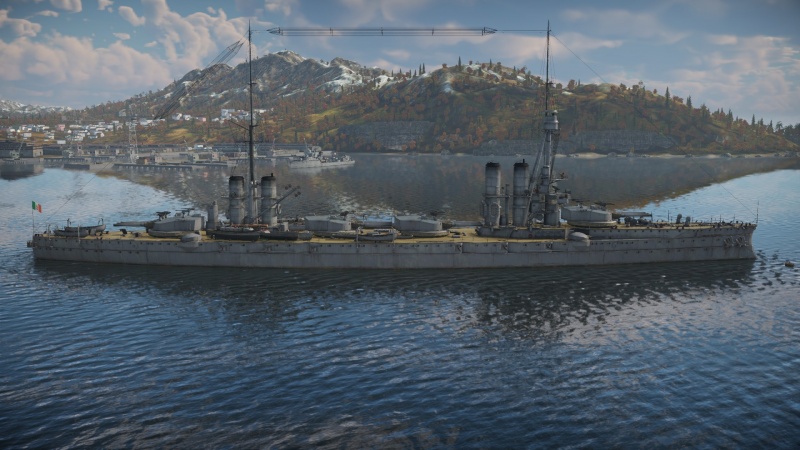 The RN Dante Alighieri, 1923 is a rank V Italian battleship with a battle rating of 6.3 (AB/RB/SB). It was introduced in Update "Red Skies".

The RN Dante Alighieri has a crew of 970 sailors, which is about average for a dreadnought. As is typical for dreadnoughts, the Dante uses a distributed armour scheme. This simply means that the armour of the vessel is spread across almost the entire hull rather than being concentrated on key compartments. The Dante has a main belt of 250mm, which is below average for a dreadnought and is approaching battlecruiser levels of thickness, however it is backed up by a 50mm turtleback layer and an array of coal bunkers which help halt penetrating shells and limit fragmentation. The entire main deck is covered in a uniform 28mm of armour which, combined with the 32mm lower deck, give a grand total of 60mm of protection against plunging fire. Not great, but is to be expected from an early dreadnought.

The upper belt is 203mm with the casemate guns above having a 100mm layer of armour. This does not give much protection against shells that hit above the main armour belt. The lower armoured deck is placed under the 100mm belt, though the 32mm of protection isn't of much use against an opponent that isn't at extremely close range, and even then you could have some of the more powerful AP shells going through anyway.

The turrets of the ship have similar levels of protection. The turret faces have 250mm, the turret sides and rears have 220mm, the gunshields are 203mm and the main barbettes are 240mm, with the lower barbettes thinning to 120mm. Again, not bad but not great.

The bow of the vessel has a layer of 100mm armour extending all the way around from both forward ends of the main belt, which is backed by a continuation of the 50mm turtleback and the 32mm armour deck, whilst the citadel has a 100mm bulkhead, all together providing decent protection against shells hitting the ship bow on, though can still be penetrated by battleship calibre guns at closer ranges.

The aft of the ship is protected by a 76mm belt, the same 28 and 32mm decks as before, the 50mm turtleback, as well as a 76mm bulkhead on the citadel. There are a lot of layers of armour that a shell might have to go through when hitting the aft of the ship, but non of these layers are particularly thick and many battleships won't have too much difficulty getting past them.

Altogether, the Dante has a level of protection that you could say is somewhere between a battlecruiser and battleship. Whilst not especially heavily protected, the vessel is more than capable of shrugging off cruiser fire and can tank some of the more intermediate battleship shells, though don't expect the ship to last very long while under fire from top tier battleships or battlecruisers.

The RN Dante Alighieri is powered by 12 pairs of engines, which in turn power 4 propellers, generating enough power to bring the ship to a maximum speed of 44 km/h, and 25 km/h in reverse. In typical dreadnought fashion, the acceleration and turning speed are both awful.

The SAP shell is the mainstay of the Dante, capable of outputting the most damage of the two shell types and is the better shell for general purpose anti-surface gunfire. The 31kg worth of filler is respectable by battleship standards and the penetration is enough to cleave through cruisers and threaten capital ships that are at close range or have thin armour.

The AP shell is far more specialised. This shell has some of the highest penetration statistics of any naval gun in the game, especially for its calibre, however the bursting charge is puny. With only 5.66kg worth of filler, this shell has the least filler of any battleship shell in the game, less even than the infamously low filler of the Scharnhorst's 283mm guns, and is more comparable with the level of explosive filler found in cruiser guns. What this means is that whilst the shell should be able to get through the vast majority of any armour it comes across, the post penetration damage will be awful and will require the shells to hit in just the right places to be useful in battle.

Both of the shell types have a slightly above average muzzle velocity of 861m/s. Not especially fast, but certainly not slow either.

This ship as anti-aircraft armament has 4 x 76 mm/40 Armstrong cannons and 2 x 40 mm/39 Vickers-Terni. The 40 mm have timed-fuze HE, though their age makes them of dubious quality at best against aircraft. The 76 mm only have AP shells, which is not all that helpful when fighting aircraft.

Being a dreadnought, the RN Dante Alighieri can cause great damage to both cruisers and destroyers and, while not the heaviest hitter of battleships in this tier, it is still capable of threatening other battleships with its 305 mm cannons. The secondary 120 mm cannons can be of great help in dealing extra damage to cruisers and destroyers while the main guns reload, though their lack of penetration and filler make them ineffective against other capital ships. Whilst the anti-air capabilities are better than usual for a dreadnought, it's still weak enough that most aircraft will be able to get through without much difficulty.

In battle, mainly use the SAP shells because of the vastly greater explosive filler compared to the AP, easily setting enemy ships alight and reducing their crew in a short time. The AP is only really useful against other battleships when the SAP can't get through the armour, or against ships where you know the exact position of their ammo racks and are close enough to aim accurately.

When fighting battleships, aim to keep the ship as angled as possible while still being able to keep all main guns on target, in order to increase the effective thickness of your armour. Whilst you can try zig-zag from side to side to dodge enemy shells, the slow speed of the ship means this is only really feasible at extreme range and even then, it will still mess up your own aiming. A better option is to change your speed from time to time, occasionally slowing down or speeding up. This is a more subtle way of dodging that may be easy for an enemy to not notice until their shots miss, and it keeps your armour fully angled at all times. While still interrupting your aiming, to a degree, it is easier to correct for than if you were to jerk the ship from side to side.

After the construction of HMS Dreadnought, several nations tried to build similar ships which were then classified as dreadnoughts, because HMS Dreadnought marked the beginning of the first battleships.

The Italian Navy was still engaged in the construction of the Vittorio Emanuele-class fast battleships, which was unsuccessful despite being promoted by a senior officer. 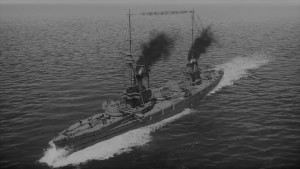 The first Italian dreadnought was the RN Dante Alighieri, launched in 1910 and designed by the Naval Engineer Edoardo Masdea.

This ship demonstrated numerous technical innovations, among which the arrangement of the 12 x 305 mm main cannons in triple turrets. To ensure maximum performance of each system, the turrets were arranged longitudinally; the system of superfiring towers was not adopted because at that time there were doubts about the system that was used by the Americans and British.

In the end, the RN Dante Alighieri can be considered as a prototype for the development of the following Conte di Cavour and Duilio classes.